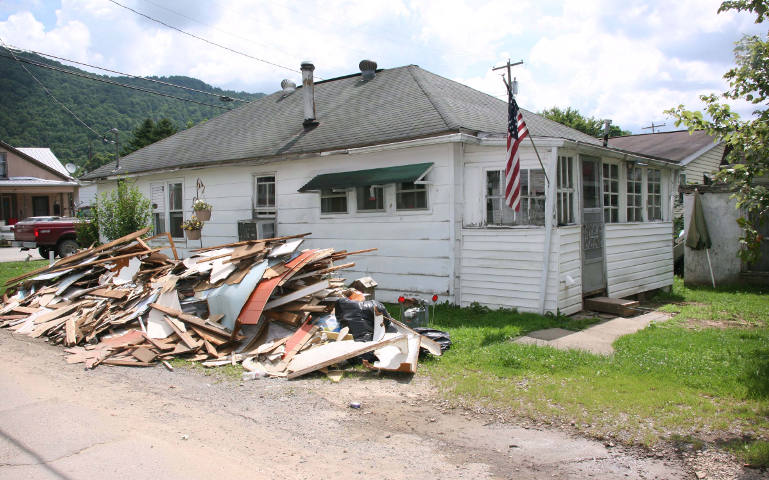 Disastrous flooding like that seen in Louisiana two weeks ago can jerk people's lives back to square one in an instant. Two months after its own historically impactful flooding, square one is where the state of West Virginia still stands, says Mark Sliter, executive director of Catholic Charities West Virginia.

The flooding that began on June 23 in the Mountain State was the third deadliest on record, according to West Virginia climatologist Kevin Law. As of Aug. 24, FEMA reported it had granted more than $111 million in federal disaster relief -- $39 million in housing grants, with almost 9,000 households and renters having applied for aid ahead of the Sept. 7 cut-off.

Even with the federal assistance, Sliter estimates it might take as long as six years for the state to get back on its feet.

Being immersed in the devastation himself, Sliter knows all too well what Louisiana and its recent flooding will be coping with for the long term. “Our hearts go out to the flood victims and they are in our thoughts and prayers,” he said.

The devastating flash flooding in West Virginia killed 23 people and severely damaged or destroyed 1,200 homes in the 12-county region where the floods occurred.

Sliter worries that two disasters in West Virginia and Louisiana so close together, combined with the prospect of any future major catastrophe, could affect volunteer work teams from other states. “Their professional technical skills might be diverted to where it is most needed.”

Another problem: When a natural disaster strikes, public attention and the media stay riveted only until the next big news event. Such a tendency to forget the “old news” disaster only amplifies the urgency to maintain donations and volunteers in West Virginia, Sliter said. He added Catholic Charities lacks sufficient funds to help for five to six years, but plans to remain involved in the long-term recovery process for a time, depending upon the funding, capacity and need.

So far, West Virginia has been blessed with donations and hundreds of volunteers.

Parishes throughout the state, along with its neighboring dioceses, have together raised nearly $800,000. In mid-August, Catholic Charities began making its first round of grants to organizations representing many different religious traditions:

Sliter said he recently visited several sites, “and they are doing wonderful work.” Through bulk buying power and zero overhead administrative costs, they are stretching the charitable dollars.

Wheeling-Charleston Bishop Michael Bransfield has made several trips to see the flood damage firsthand, visiting Rainelle in late July. The diocesan newspaper The Catholic Spirit reported that the bishop met flood victims at Sacred Heart Parish and also went to several of the wrecked homes where displaced owners showed how high the water rose.

"It is vital for us to see both what has occurred, and how people are beginning to put their lives back together,” the bishop told the newspaper. “This way, we can make sure we get them what they truly need at this time and set them on a path to rebuilding their homes and their lives."

With many communities working to get past square one after the flood, its ministries too find themselves in a similar situation.

Since the June 23 flood, Deacon David Galvin's schedule at St. James the Greater Church in Charles Town has changed drastically. It now includes a nine-hour weekly round-trip to Richwood, a town of 2,000 that was hammered by the flood and where the St. James parish has spent mission trips and retreats working with its long-time adopted neighbor parish of Holy Family Catholic Church.

Richwood was already in dire straits before the flood, Galvin said in an email, when the decline of the coal industry “brought great poverty to our people without any resolution.” The flood wiped out schools and the local Dollar General, its only major store, and triggered an evacuation at a nursing home. The local food pantry, which was heavily relied upon, was wiped out, too.

Since the floodwaters subsided, Galvin and a group of 60 volunteers have traveled weekly to Richwood in a convoy of trucks. So far, they've delivered 60 washers, dryers and microwaves to help the people there provide for themselves once more. The St. James parish also donated one of its own box trucks to Holy Family's pastor Fr. Quy Dang.

In addition, Galvin and his parishioners have begun refurbishing a shuttered parochial school into a multi-purpose facility that will serve as a place for volunteers to live as well as house a new food pantry. Through partnerships with local businesses, they have been able to ship a semi-truck filled with mattresses to the town, so as Galvin put it, “people can have a solid night's rest before facing the work to be done the next day.”

Over at St. Charles Borromeo Church in White Sulphur Springs, Fr. Chapin Engler has witnessed a parade of volunteers residing at his rectory and in tents in the parish parking lot.

“The flood changed everything,” he said.

Shortly after the floodwaters receded, Mike Baumgartner and his food truck from the Disaster Assistance Church of Christ arrived at the church and began serving meals to volunteers and anyone else in need of food. He and volunteers scoured the hollows, as well.

In one month, his food truck served 14,782 meals in the White Sulphur Springs area.

The "one man show" Baumgartner invested $30,000 in food supplies and other flood recovery efforts. He has a registered charity and drives from disaster to disaster, recruiting other volunteers to deliver food. Catholic Charities awarded him $10,000 to help leverage a matching grant of another $10,000 from an anonymous donor.

The famous Greenbrier Resort, which is just across the street from S. Charles Borromeo, began taking in people left homeless from the flood. The town of White Sulphur Springs, suddenly became a beehive of helpers, including college students, who haven't balked at the messy first phase of flood debris cleanup called mucking. One hard working volunteer told Engler, “You couldn't pay me to do this.”

Beyond opening his parking lot to a tent city, Engler set to work encouraging people to donate to his parish poor box. Since the priest serves as the summer pastor for wealthy vacationers at the Greenbrier, it began filling up in short order.

“One guy wrote me a check for $12,500,” he said. A news report on CNN didn't hurt anything, either. Pretty soon the poor box held $65,000. Engler said the money will stay in the town to support local clean up and construction efforts.

Engler, who hosts a radio show sponsored by the Wheeling-Charleston diocese, is in it for the long haul, with more volunteers booked to stay at his parish in the coming weeks.

The long haul, though, has also brought something entirely unexpected into the priest's life: a stray gray and white kitty.

“I'm 54 years old and this cat is driving me crazy,” he confessed.

But when a local animal shelter told him of the likely fate for the feline if no one gave her a home, he caved. And he's glad he did. “I've found a part of me that I didn't know existed,” he said of the cat now called Stormy.

A refrain that other flood volunteers might be experiencing in their own souls, as well.