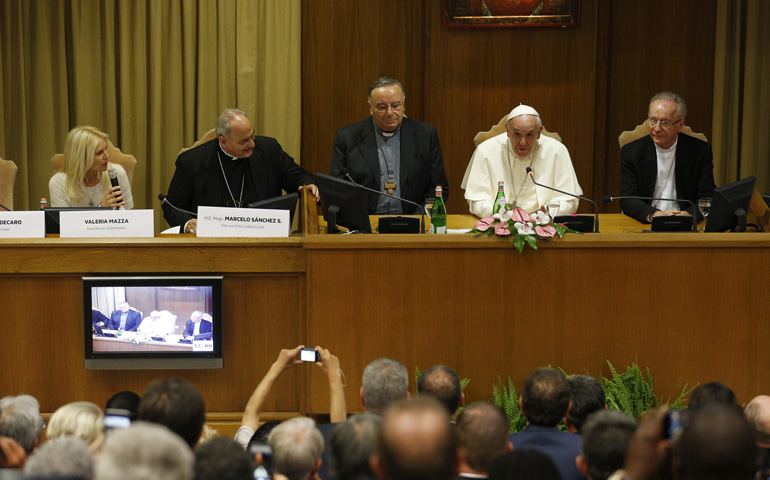 Pope Francis addresses a workshop on climate change and human trafficking attended by mayors from around the world Tuesday in the synod hall at the Vatican. Also at the workshop, from left: Argentine model Valeria Mazza, serving as master of ceremonies; Bishop Marcelo Sanchez Sorondo, chancellor of the Pontifical Academy of Sciences; Cardinal Francesco Montenegro of Agrigento, Italy; and Cardinal Claudio Hummes, former prefect of the Congregation for the Clergy. (CNS/Paul Haring)

After decades of world leaders trying to set global goals to address climate change and extreme poverty, city mayors gathered at the Vatican to pledge they will take real action and lead the fight on their streets.

Pope Francis told the mayors that they were important because they were at the "grass roots" and could make concrete changes and put pressure on leaders above them.

The pope spoke briefly off-the-cuff in Spanish Tuesday after more than 60 mayors attended a daylong workshop on modern slavery and climate change, sponsored by the Pontifical Academies of Sciences and Social Sciences in the Vatican's synod hall.

The academies invited the leaders to share best practices, to sign a declaration recognizing that climate change and extreme poverty are influenced by human activity, and to pledge to pursue low-impact development to make cities "socially inclusive, safe, resilient and sustainable."

The pope told his audience, "We really have to involve the United Nations in these things" and make sure it takes "a very strong position on this issue, especially the trafficking of human beings that is caused by this environmental situation and the exploitation of people."

"I really do hope that a fundamental, basic agreement is reached" at the U.N. climate summit in Paris in December, he added.

Mayor Mitchell J. Landrieu of New Orleans told Catholic News Service, "There is a vivid recognition that mayors are key players in changing how policies that have before now been spoken about across nations are actually applied on the streets of the cities. Mayors are actually responsible for getting things done."

Mayor Bill de Blasio of New York City said in his speech, "It's increasingly clear that we local leaders of the world have many tools and that we must use them boldly even as our national governments hesitate."

Landrieu told CNS that he was looking forward to hearing what other mayors were doing to make cities more resilient and "get a practical guide on climate change." When Hurricane Katrina hit 10 years ago, he said, his city became "the canary in the coal mine" showing the world how extreme weather associated with climate change can devastate a major city.

A number of mayors said that their countries and cities are still learning about the actual extent and seriousness of modern-day slavery and human trafficking and therefore found it helpful the Vatican invited two former victims to tell their stories.

Mayor Tony Chammany of Kochi, India, told CNS his region faces huge problems with forced organ donations. Even though there are strict laws against such crimes, the problem "is corruption at the level of governance. We have laws, but who is going to enforce them?" he said.

Another problem, he said, is that mitigating climate change and curbing poverty and exploitation cost money and demand investments, and so today's financial crisis is hindering greater efforts.

But it is really "a question of priorities," he said. Governments must make the environment and social problems a top priority in public spending.

De Blasio said making an impact will not be easy; Francis' recent encyclical on creation "holds individuals accountable for the fate of our planet, but it rightly asks the most of governments."

People are being "pushed by the highest moral authority to take the next step, no matter how challenging it appears to be," he said.

Mayor Gregor Robertson of Vancouver, British Columbia, told CNS that governments are not accustomed to hearing spiritual leaders speak so courageously and effectively about social and ecological ills.

It's not out of place for the pope to add his voice to the political debate because "we all have a moral responsibility to speak out when we see injustice and a planet in peril" and take real action, he said.

California Gov. Jerry Brown said in his speech that there is "fierce opposition and blind inertia" to moving away from dependence on petroleum and coal. And, he said, "that opposition is well financed -- hundreds of millions of dollars are going into propaganda, to falsifying the scientific record, bamboozling people of every country."

"There was a period when our forefathers didn't know anything about development," he said. That changed when outside assistance brought in modern methods "and this development is now making us be engaged with the world" and getting his people access to new technologies, he said.

In fact, Thutlwe said he sees public-private partnerships as being key to growing a more "green" development, for example by partnering with solar-panel companies to exploit his country's abundance of sunshine and get needed electricity to more people.

Mayor Angela Brown-Burke of Kingston, Jamaica, told CNS that if local people have no options, they will continue to use polluting fuels.

"People aren't stubborn. They are trying to make a living," she said. "They say, 'If I need fuel, don't tell me not to cut down my trees because that's the only way I am going to be able to cook my food.'"

Communities will need to provide the alternatives if any of the environmental awareness campaigns are going to work, she said.

On the topic of trafficking, Brown-Burke said that "as an individual who is from enslaved people, it is extremely important for us to understand the legacy that we have and to ensure that no one else has to go through that again."

Today's slavery is much worse, she said, because today's "chains are invisible, they're in your mind in a sense and they are just as real if not worse."

Mayor Yelgi Verley Knight of Siquirres, Costa Rica, told CNS that she is disappointed to see so few women on the Vatican's list of speakers, especially because women are the first victims of human trafficking and the poverty caused by climate change.

"We as women mayors have to speak for those who have no voice. Slavery isn't something of yesterday. I am of African descent; my ancestors came to the Caribbean as slaves, a situation that was driven by the economic system, which is the same thing that is happening today."

Banana and pineapple plantations have abused the land for decades, she said, even though "it all started with the idea of economic development."

But the plantations "benefited only a few. Our economy has been designed to benefit only a few and to get cheap labor. Jesus said, 'Love your neighbor,' but we are loving only a few of our neighbors."

[Contributing to this story was Cindy Wooden at the Vatican.]