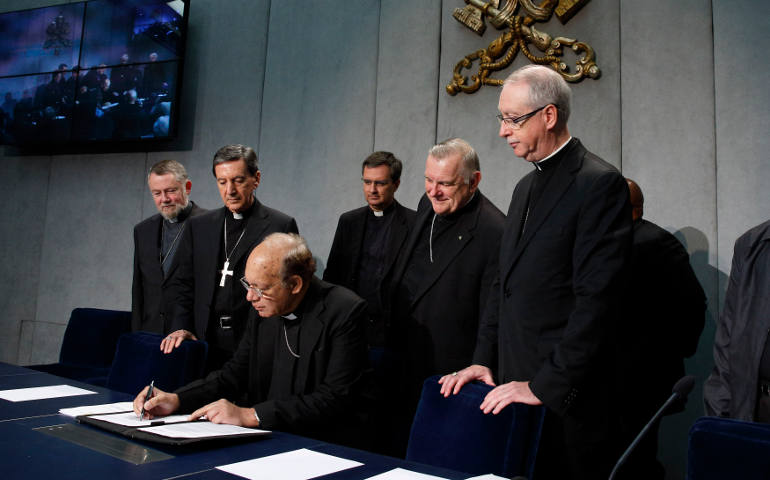 Cardinal Oswald Gracias of Bombay, India, signs a document at an Oct. 26 Vatican news conference in which leaders of the world's regional bishops conferences appealed for action on climate change. (CNS photo/Paul Haring)

The world’s bishops have a clear message for world leaders set, in barely a month, to enter the latest and perhaps most significant round of international climate negotiations: Get the deal done in Paris.

In Rome on Monday, the heads of six continental bishops’ conferences, along with leaders of national conferences in the United States and Canada and of the Catholic patriarchs of the Orient, made the collective call -- “on our own behalf and on behalf of the people for whom we care” -- to the negotiating parties who are set to arrive Nov. 30 in Paris for the annual United Nations climate change conference, formally known as the 21st Conference of the Parties (COP 21).

“We join the Holy Father in pleading for a major break-through in Paris, for a comprehensive and transformational agreement supported by all based on principles of solidarity, justice and participation,” the bishops said in their appeal, which drew heavily from Pope Francis’ encyclical, “Laudato Si’, on Care for Our Common Home.”

Delegates to COP 21 are expected to finalize a global deal committing all nations to self-set pledges aimed at limiting greenhouse gas emissions in order to bypass the worst impacts of climate change.

In the appeal, the bishops outlined 10 points to what would qualify as a successful agreement: one that is “just and legally binding,” links climate change to social injustice and exclusion, with special concern for the poor and most vulnerable, places the common good before national interests, and puts in writing enforcement and review measures for each country’s pledge to reduce emissions.

Such an agreement, they said, would also reflect the ethical and moral dimensions of climate change and accept the view that the climate and atmosphere are “global common goods” belonging to all and meant for all. In addition, the bishops challenged leaders to “strongly limit a global temperature increase” and to devise “climate compatible” models of development and lifestyle that address inequality and offer an outlet from poverty. “Central to this,” the bishops wrote, “is to put an end to the fossil fuel era, phasing out fossil fuel emissions and providing affordable, reliable and safe renewable energy access for all.”

“Reliable scientific evidence suggests that accelerated climate change is the result of unrestrained human activity, working to a particular model of progress and development and that excessive reliance on fossil fuels is primarily responsible,” they said.

The latest round of U.N. climate summit runs Nov. 30-Dec. 11 in Paris. COP 21 has drawn heightened attention as it is expected to ratify the first global climate accord since the 1997 Kyoto Protocol, with this version binding all 195 COP member nations (to differentiating degrees, based on historical responsibility), rather than solely the industrialized world.

During the Monday press conference, Cardinal Oswald Gracias, president of the Federation of Asian Bishops’ Conferences, called the appeal “a very historical occasion,” and represented the first time in his memory that all the heads of the continental bishops’ federations have, first, come together, and second, around such a collective document.

“We’re here to, in a way, respond to what the Holy Father has asked for in Laudato Si’, and also because of the urgency all of us have felt,” he said.

Gracias and his fellow bishops described the present-day experiences of the effects of climate change in their corners of the world, from more frequent and intense cyclones in India and typhoons in the Philippines, to more recurrent flooding of Bangkok, to the relocation of the people of the Carteret Islands to Bougainville, both off the coast of Papua New Guinea.

“It is taking some time to do so,” said Ribat, president of the Federation of Catholic Bishops’ Conferences of Oceania, of the resettlement. “The people are not readily willing to go because they fear that their culture will go, will disappear. And all other things that belong to them will no longer be there. And their fear also at this time as they go settle on this place they’re given to resettle, will they be accepted easily and peacefully?”

The Papua New Guinea archbishop said his plea is that all people do what they can to encourage an ambitious, binding and fair agreement in Paris and beyond. “Ask politicians to guarantee the future existence of Oceania," he said.

The seeds of the global bishops’ appeal germinated in July at a post-encyclical conference in Rome organized by the Pontifical Council for Justice and Peace and CIDSE, an international coalition of Catholic development agencies. During an informal side meeting, representatives of various continental bishops’ conferences came to the conclusion they should take some type of collective action. Leading the way were the Asian bishops, according to one of the document’s organizers.

“FABC played the strongest role in the whole initiative,” said Bernd Nilles, CIDSE secretary general, who collaborated in the construction of the joint statement.

In particular, Cardinal Luis Antonio Tagle, president of Caritas Internationalis (another organization assisting the appeal), was central in building a bridge between bishops from climate vulnerable regions, like his native Philippines and parts of Oceania, and those on continents home to the historical output of carbons emissions.

“You need lead figures … in the last steps to get really everybody on board. That was very important,” Nilles said.

Meetings among the eventual signing parties picked up in September and continued through the Synod of Bishops on the family, which formally concluded Saturday. The text was finalized Thursday. While different proposals were studied, scrutinized and modified, the appeal’s starting point was always bedrocked in Laudato Si’, with the bishops eager to show a united front in support of the pope and the encyclical. Throughout the encyclical, Francis challenged for greater courage among political leaders to take responsibility to reduce greenhouse gases and work toward the global common good.

A second text provided further inspiration: a plea last December for a climate agreement from nine bishops made during the U.N. climate talks in Lima, Peru. In their statement (also coordinated by CIDSE), the bishops, themselves representing four continents and five countries, called for “an end to the fossil fuel era” and endorsed the goal of holding average global temperature rise below 1.5 degrees Celsius.

An early version of the global bishops’ appeal echoed the Lima bishops in calling for the 1.5 degrees target, but was ultimately left out of the final iteration. Conversations weighed including a specific temperature target, Nilles said, but it became clear it was not an area of comfort for the bishops, who found it “kind of tricky” as pastors to pinpoint the proper decimal.

Speaking with journalists in Rome following the press conference, Miami Archbishop Thomas Wenski, who acknowledged U.S. bishops opposed inclusion of the 1.5 degrees limit, made much the same point: “To say 1.5 or 1.6 or 1.7, that seemed to be more the competencies of a scientist than the competencies of a pastor,” in that advocating a specific number could lead people to question why bishops viewed themselves adept to even make such an argument.

“What they say is something which leads to a similar result in the end,” Nilles told NCR.

In the appeal the bishops hinted at a target, Gracias said, in proposing the Paris agreement “strongly limit a global temperature increase and to set a goal for complete decarbonisation by mid-century, in order to protect frontline communities suffering from the impacts of climate change, such as those in the Pacific Islands and in coastal regions.”

Ribat, for his part, invoked the 1.5 degrees goal at the press conference in saying the world community has the means and alternatives available to change course and limit temperature rise below that level. In briefly contrasting the limits of 1.5 degrees and 2 degrees warming, Jean-Pascal van Ypersele de Strihou, former vice-chair of the Intergovernmental Panel on Climate Change, said the science has outlined the potential scenarios but ultimately, it comes to a value judgment: “For example, are the lives of those who would be drowned under such a long-term sea level increase worth saving or not?”

According to the 2014 IPCC report, to limit warming to 1.5 degrees by 2100 would require slashes in emissions of 70-90 percent below 2010 levels by 2050; Continuing down the status quo could result in 4 degrees of temperature rise. Scenarios aiming for a max 2 degrees rise would require the near-elimination of fossil fuel use by century’s end, a timeline that ratchets up as the temperature goal shrinks.

“That’s what the IPCC says, so de facto, the bishops are not naming a temperature, but they are very clear: If you want to protect vulnerable communities, you need to phase out fossil fuels and decarbonize,” Nilles said.

Even without a specific temperature target, the CIDSE director hailed the appeal as “a major achievement across continents,” and in particular noted the positive movement on the climate issue occurring in North America -- in the U.S., given greater momentum through the papal visit in September. Though the appeal comes from some of the highest echelons of church hierarchy, Nilles stressed it doesn’t represent a message “from the ivory tower,” but one embedded in “the concrete reality of people.”

“Who decides in the end in Paris are the national governments, so the bishops can play now an important role to bring that in their continents to the table. So it’s not just something coming from the Vatican, from the pope, it’s really something from the local church that asks their politicians to do,” he said.

Gracias said he understood the political challenges posed by taking the necessary steps to curb global warming, in that par for politicians is to think and operate within the confines of their term in office, whereas climate change is an issue impacting generations. The church’s duty, he continued, is to bring forward the ethical and moral principles for adopting a long-term lens in matters concerning the climate.

“We are therefore wanting to make an earnest appeal on behalf of our people. Because the ones who will suffer, if decisions are not taken by governments, will be our people,” Gracias said.