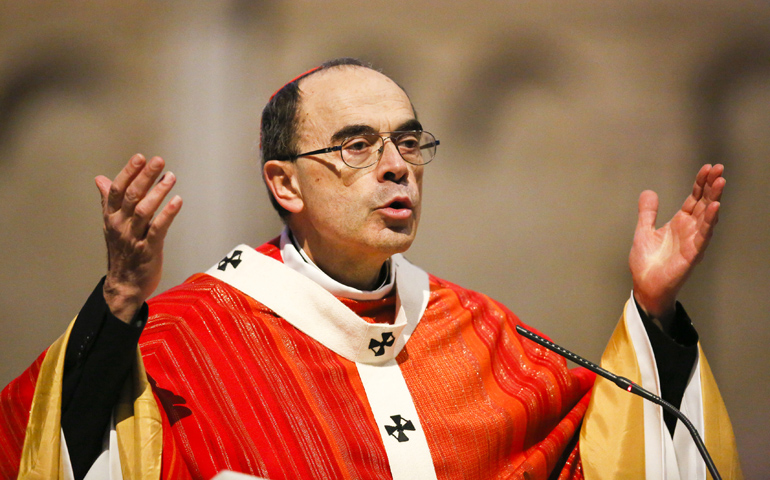 Cardinal Philippe Barbarin of Lyon, France, -- who last week admitted to "errors in  managing ... certain priests" -- is being investigated by French police for failing to report in 2007 and 2009 allegations of sexual abuse by his priests, in contravention of French law. There have been calls for his resignation or sacking.

Central to every coherent legal system based on the rule of law is that people can only be punished for disobeying the law, not for obeying it. The calls for Barbarin's resignation or sacking raise the issue of how he breached canon law.

In failing to report the allegations, Barbarin was complying with the pontifical secret imposed by Sacramentorum Sanctitatis Tutela of Pope St John Paul II which applies Article 1(4) of the 1974 Instruction of Pope Paul VI, Secreta Continere. It has no exceptions for reporting allegations of child sexual abuse to the civil authorities. In 2002, the Holy See granted to the United States a dispensation from the pontifical secret with a direction to report where there were civil reporting laws, but that direction was not extended to the rest of the world until 2010. Whatever Barbarin's culpability under French civil law, canon law in 2007 and 2009 forbade him from reporting the allegations to the police.

In 2001, Bishop Pierre Pican of Bayeux-Lisieux, France, was given a three-month suspended jail sentence for failing to inform authorities about a serial paedophile priest. Pican is now bishop emeritus, retiring in 2010 at the mandatory age of 75. In September 2001, Cardinal Dario Castrillón Hoyos, at the time the prefect of the Vatican's Congregation for Clergy, wrote to Pican congratulating him for the cover up. He said that he was sending a copy of his letter to all the bishops of the world, holding up Pican as a model to follow. He also said his congratulatory letter was approved by Pope St John Paul II. Similar statements condemning the reporting of paedophile priests to the police by bishops were made in 2002 by high ranking prelates in the Roman Curia and Church leaders in France, Germany, Belgium and Honduras.

Apart from obeying canon law, Barbarin was acting in accordance with the overwhelming weight of opinion of the church's most senior cardinals and canon lawyers about his moral, ethical and canonical obligations at the time — go to jail rather than report. It is hardly surprising that he acted the way he did.

Significantly, the latest news reports about Barbarin have pointed to a different basis for which he might be punished under canon law. The vicar general for the archdiocese Fr. Yves Baumgarten told a press conference: "We failed to fulfil our obligation to investigate and to seek the truth." There was no suggestion that any such "failure" had anything to do with Barbarin's failure to report to the police.

Canon 1717 of the 1983 Code of Canon Law requires a bishop to conduct a preliminary investigation of allegations of child sexual abuse by clerics that have any semblance of truth. Under Sacramentorum Sanctitatis Tutela, the allegations and the information gained in that investigation are to be sent to the Congregation for the Doctrine of the Faith which will then instruct the bishop how to proceed. The admission by Baumgarten suggests that these investigations did not take place. If that were the case, Barbarin can rightly be held accountable under canon law.

But what would have happened if he had conducted such investigations in 2007 and 2009 as required? The pontifical secret prevented him from reporting to the police the allegations and information gained in that investigation at least until 2010 when the direction to obey civil reporting laws was extended to France.

Even after 2010, there was still a problem. On July 15, 2010, when the Vatican spokesman, Jesuit Fr. Federico Lombardi announced the extension, he said that such reporting should take place: "in good time, not during or subsequent to the canonical trial." The "trial" under canon law commences the moment the preliminary investigation commences.

It was not entirely clear if Lombardi was simply giving bishops advice about the best time to report, or that he was putting restrictions on the direction. The matter is of some importance, because if it were the latter, the bishop would be precluded from reporting once the preliminary investigation starts, even where there are local civil reporting laws.

In 2015, the Holy See seemed to confirm these limitations on reporting in the case of Fr. Mauro Inzoli, accused of abusing dozens of children over a ten year period. He was dismissed by Pope Benedict in 2012, but Pope Francis reinstated him with restrictions on his ministry. When Italian investigating magistrates wanted to see the documentation of his canonical trial, the Holy See refused, saying: "The procedures of the Congregation for the Doctrine of the Faith are of a canonical nature and, as such, are not an object for the exchange of information with civil magistrates."

The Vatican statement suggests that even where there are civil reporting laws, the pontifical secret prevents the disclosure of any information arising out of the preliminary investigation or penal trial.

The calls for Barbarin's resignation or sacking may now be justified if he did not initiate preliminary inquiries under Canon 1717, but that has nothing to do with his alleged cover up.

The solution to this problem is for Pope Francis to agree to the demands of two United Nations Committees and the wishes of the Catholic Bishops Conferences of the United States, England and Wales, Ireland and Australia to impose mandatory reporting under canon law irrespective of whether there are civil reporting laws. Regrettably, in September 2014, Pope Francis rejected the requests of the United Nations Committees. He is an absolute monarch when it comes to canon law, and he can change it with the stroke of a pen. The problem of the cover up will continue to fester until he does so.

[Kieran Tapsell is the author of 2014 book Potiphar's Wife: The Vatican's Secret and Child Sexual Abuse .]