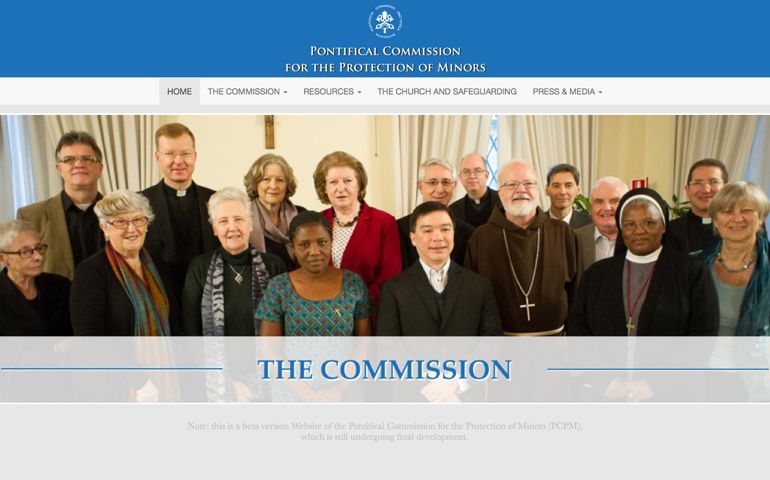 Dec. 6, 2016, screenshot of a beta version website of The Pontifical Commission for the Protection of Minors (CNS)
This article appears in the Royal Commission 2017 feature series. View the full series.

On March 1, Marie Collins, the only abuse survivor on Pope Francis' Pontifical Commission for the Protection of Minors, resigned because "what was happening behind closed doors was in conflict with what was being said to the public."

Justice Peter McClellan,* the chair of the Royal Commission, told the panel that the work they were doing was of "fundamental importance to individual countries" because the work of the Royal Commission indicates that real change in the culture and practices of the church in Australia will only occur if "it's coming from Rome."

After several hours of questioning in which the panel spoke about resistance in Rome to the work of the Pontifical Commission and its lack of resources, McClellan observed: "The picture you all paint, from an outsider's point of view, is of a world organization which is struggling to come to terms with the safety of children and its responsibilities in that area."

A surprising feature of the evidence from the panel was the lack of attention to the reform of canon law, both in relation to cooperation with the civil authorities and to the church's disciplinary system. An Italian professor of canon law who couldn't speak English was appointed to the Pontifical Commission, but he resigned. Baroness Hollins told the Royal Commission: "I don't know the full reasons, but we were told that he had decided he couldn't make the contribution that was needed." An American canon lawyer in Rome gave some assistance, but then had to return to the United States. There is no canon lawyer on the now 15-member Commission.

Since 1996, the Catholic Bishops' Conferences of Ireland, Great Britain, the United States, and Australia have wanted mandatory reporting under canon law, but have been continually rebuffed by the Vatican. In 2002, the United States bishops put a proposal to the Vatican that included mandatory reporting, but, like the Irish bishops in 1997, were told it did not comply with canon law. Eventually a compromise was reached whereby bishops were instructed to obey civil reporting laws, and that instruction was extended to the rest of the world in 2010. The Vatican seemed more concerned about bishops going to jail for breaching reporting laws than about the protection of children who were unfortunate enough to be living in states with inadequate civil reporting laws.

In 2014, the United Nations Committees on the Rights of the Child and against Torture queried the Vatican's representatives as to why the Vatican did not impose mandatory reporting under canon law. Pope Francis' casuistic response in September 2014 was that mandatory reporting would interfere with the independence of sovereign states. Canon law interferes with the sovereignty of independent nations as much as the rules of golf. Mandatory reporting under canon law would only interfere with that sovereignty if a country prohibited the reporting of child sexual abuse to the police. No such country exists.

In February 2016, Boston Cardinal Sean O'Malley, the president of the Pontifical Commission stated that "even beyond these civil requirements, we all have a moral and ethical responsibility to report suspected abuse to the civil authorities." This was a welcome announcement suggesting that the Commission might convince Pope Francis to change his mind about mandatory reporting. However, on Dec. 6, 2016, the Pontifical Commission published its guidelines for national protocols on child sexual abuse. O'Malley's statement was not included.

When asked about mandatory reporting, Kilgallon answered along the lines given by then-Vatican spokesman Jesuit Fr. Federico Lombardi on May 16, 2011: the church cannot impose mandatory reporting because some countries have repressive regimes. The irony of Lombardi's response is that in 2010, when he announced the direction for bishops to obey civil laws on reporting, there was no suggestion of an exception for repressive regimes.

Opponents of mandatory reporting under canon law seem to be unaware of the church's history. In 1842, the Holy Office under Pope Gregory XVI issued a direction that the universal requirement for penitents to denounce priests who solicited sex in the confessional henceforth did not apply in the lands of "schismatics, heretics and Mohammedans," the repressive regimes of the day. It's really very simple. Kilgallon agreed that an exception to mandatory reporting could be made for such countries, but that was only his personal opinion.

On Feb. 22, Br. Ambrose Payne from the De La Salle Brothers told the Royal Commission that Pope Francis' rhetoric about "zero tolerance" of child sexual abuse did not match the reality imposed by canon law. Canon law requires a religious brother to receive a "canonical warning" before he can be dismissed. Payne said it was "a bit late" to require warnings after the abuse had occurred. The abuser has to offend again after a canonical warning has been given before he can be dismissed.

Zero tolerance in a professional context almost invariably means dismissal, but Pope Francis' claim that the church has a "zero tolerance" policy is not borne out by the figures he presented to the United Nations: only one quarter of all priests found to have sexually abused children have been dismissed. That's a 75 percent tolerance, not zero.

The buck for canon law stops at the popes, and Pope Francis can change it with the stroke of a pen. The lack of consistency between his rhetoric and his reluctance to reform canon law on child sexual abuse could turn out to be the major blot on his papacy. When Collins resigns and Kathleen McCormack describes her work at the Pontifical Commission as "like water on a rock, we've just got to keep at it," there is not much room for optimism.

[Kieran Tapsell is the author of Potiphar's Wife: The Vatican's Secret and Child Sexual Abuse, and a submission to the Royal Commission: Canon Law: A Systemic Factor in Child Sexual Abuse in the Catholic Church. He gave evidence about canon law as part of a panel Feb. 9, 2016.]

*Justice Peter McClellan's name was misspelled in an earlier version.

Australian archbishops to ask Vatican for clarity on confession issues