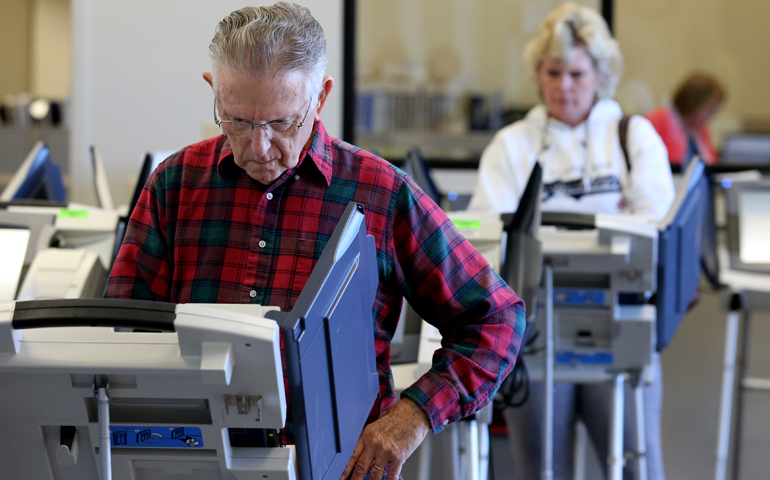 White Catholics have been riding a political rollercoaster this year with their support for Donald Trump going up and down and then back up and now down again. Where they will be on Election Day may well determine the outcome of the race.

Back in March, 56 percent of white Catholics went for Trump versus 29 percent for Hillary Clinton in a two-way race, according to an ABC-Washington Post poll of registered voters. In May, he reached his all-time high with White Catholics when 64 percent of them gave him their support, while only 28 percent supported Clinton. (See graph below prepared by Catholic Democrats using ABC-Washington Post poll data provided by Langer Research Associates).

Things turned sour for Trump in June with his support from white Catholics dropping to 48 percent. He bounced back to 54 percent in July before the Republican convention, but then dropped to a low of 45 percent in August after the two conventions. It looked for a while like The Donald had finally crashed and burned, but he then recovered in September climbing to 59 percent, just higher than he was in March.

Clinton has been on the same rollercoaster in reverse. Only in August did a majority (51 percent) of white Catholics say that they would vote for her. Her August numbers caused quite a stir in the media because it was a big turnaround from four years ago when Mitt Romney did very well with white Catholics. Were white Catholics finally returning to the Democratic Party. "No," said her numbers in September when only a third of white Catholics supported Clinton.

Will the rollercoaster ride continue with white Catholics returning once again to Trump, or will they ride on to destination Clinton? Whichever they do could very well determine the future of the nation.

Gradually, however, thanks to the GI Bill and hard work, white Catholics got educated, joined the middle class, and moved to the suburbs. As they made more money, they paid more taxes. As business executives and professionals, they chaffed under government regulations. And as the Democratic Party advanced the cause of blacks and Hispanics, white Catholics felt ignored or even threatened. All of this made them easy pickings for Republican strategists beginning with Richard Nixon.

Gone is the day when White Catholics were reliably Democratic. According to Pew Research Center, White Catholics today are not as Republican as Mormons or White Evangelicals, but since at least 1994, they have split between identifying as Democrats or Republicans.

From 1996 until 2009, they still identified as Democrats (except in 2002), but only slightly. Beginning in 2010, more have identified as Republican than Democratic, but again, only slightly. This makes white Catholics an important category for anyone seeking swing voters.

One would expect white Catholics to get more attention from the political elites, but the truth of the matter is that elections today are decided by turnout not swing voters. Election strategy is geared toward turning out a party's core supporters not convincing swing voters to finally decide. That is why elections have become more partisan in tone. Candidates are not trying to turn swing voters; they are trying to motivate their supporters to go to the polls.

But white Catholics may surprise all the pundits and determine the results of this election by their votes.