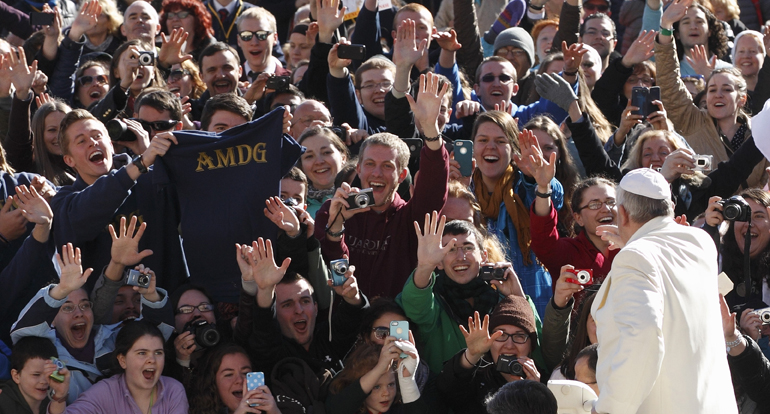 Students from the Gaming, Austria, campus of Franciscan University of Steubenville, Ohio, cheer as Pope Francis arrives to lead his general audience in St. Peter's Square at the Vatican March 5. (CNS/Paul Haring)

Pope Francis is the most talked about person in the world. He has been on the cover of almost every magazine, he makes the news almost every week, and he is a Twitter and Facebook sensation. He drew huge crowds in Rio de Janeiro and continues to draw large crowds in Rome.

But what impact is he actually having on the life of the church? In an attempt to answer that question, the Pew Research Center Religion & Public Life surveyed Americans' views of Pope Francis in February.

People overwhelming like the pope. Eighty-five percent of Catholics and 60 percent of non-Catholics view the pope favorably, numbers that would make politicians green with envy. Among Catholics, Pope Francis' ratings are up there with those of Pope John Paul II, who had favorable ratings between 91 and 93 percent in 1987, 1990, and 1996.

The favorable ratings are across generations, with the youngest cohort (18-39 years) just slightly less enthusiastic than the oldest cohort (60-plus). One would have expected exactly the opposite, with the more liberal young people more favorable to Francis than their conservative elders. Those who attend church weekly are also more favorable (89 percent) toward Francis than those who attend less often (84 percent). Again, we might have expected the opposite. Perhaps the young and those attending church less are simply paying less attention to Francis.

Many conservative commentators have argued that Francis does not represent significant change in the church. Seventy-one percent of Catholics disagree. The young and the old are more likely (73 percent) to see major change than the middle cohort (40-59 years; 67 percent). And of those Catholics who see major change, 68 percent see it as change for the better.

Catholics also give Pope Francis high marks (81 percent) for "spreading Catholic faith" and "standing for traditional moral values." Despite all his talk about the poor, the percentage saying he is doing an excellent or good job "addressing needs/concerns of the poor" is five percentage points lower. Once again, conservative worries about him overemphasizing concern for the poor appear to be misplaced.

Fewer, but still a majority, think he is doing an excellent/good job "reforming the Vatican bureaucracy" (62 percent), "addressing the sex abuse crisis" (54 percent), and "addressing the priest shortage" (50 percent).

Although John Paul and Francis excel in the polls, Pope Benedict XVI is no slouch, with favorable ratings between 67 and 83 percent among Catholics. Catholics like their popes! What American politician or celebrity gets these kind of ratings?

But favorable ratings do not necessarily translate into agreement. With John Paul and Benedict, Catholics liked the singer but not the song. Every poll that showed people liked them also showed that people disagreed with some of their teachings, especially on sexuality and gender. On the other hand, Catholics see major change under Pope Francis and they like it. His emphasis on the love, compassion, and mercy of God is playing well.

The Pew study also found overwhelming support among Catholics for the use of birth control (77 percent), allowing priests to marry (72 percent), and allowing women to become priests (68 percent). Francis has urged more compassion for Catholics unable to observe the church's teachings on marriage; he has noted that celibacy is a matter of law not doctrine; and has ruled out women priests but called for a greater role for women in the church. Catholics want more, but they still like Pope Francis.

Considering Francis' opposition to women's ordination, you would expect women to be less enthusiastic about Francis than men, but the opposite is true. Eighty-nine percent of women have favorable views of the pope as opposed to 82 percent of men. Women are also more likely to see Francis as representing major change (74 percent versus 68 percent).

It is clear that Catholics like Pope Francis and see him as representing major change, but has it affected how they live their Catholicism?

The results of this survey remind us that the pope is not the Catholic church, although he plays an essential role. If Tip O'Neil is right that "All politics is local," then it is also true that "All Catholicism is local." If people become enthusiastic and return to church because of Pope Francis but find that same old same old, then they will turn around and leave. If rather than hearing the message of Francis, which is the message of the Gospel, they hear from the pulpit rules and condemnations, then they will never return.

Francis cannot save Catholicism all by himself. Bishops and priests have to get with the program. Francis is modeling what it means to be a good bishop, a good priest, a good Christian, but if we don't follow him, his efforts will fail.