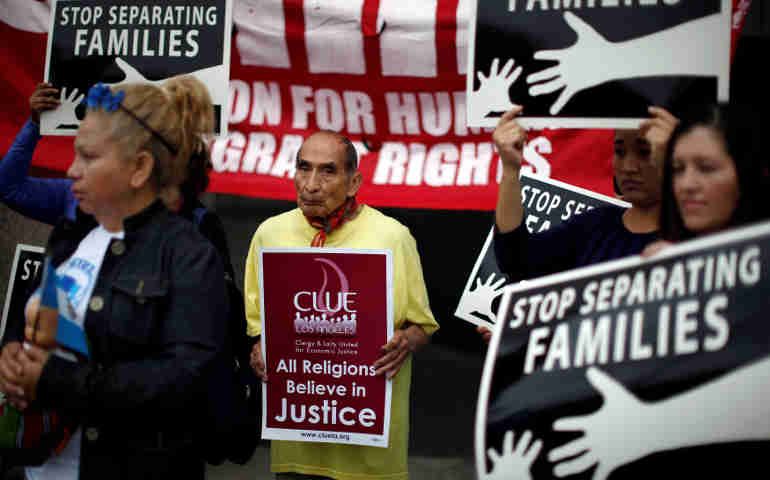 Imagine fleeing for your life to what you think is a safe haven only to find yourself rejected and returned to those who are threatening you. You try to explain your plight, but you are greeted with suspicion and hostility.

This is the nightmare experience of many who come to the United States seeking asylum from persecution and imminent danger.

According to national and international law, the United States has an obligation to identify and protect bona fide refugees and asylum seekers, but too often this does not happen. For example, one Bangladeshi asylum seeker was was turned away by a U.S. border protection officer and told to apply for asylum with Mexico.

Under the "expedited removal" process, foreign nationals arriving in the United States without proper documentation can be returned to their countries of origin without delay, and without immigration court removal hearings, unless they establish a credible fear of persecution or torture. Many asylum seekers leave their countries without documents because they are fleeing imminent death. Others carry false documents because they fear their own government.

"Expedited removal" is a complicated administrative process involving a number of agencies within the Department of Homeland Security (DHS), including U.S. Customs and Border Protection (CBP), U.S. Immigration and Customs Enforcement (ICE), and U.S. Citizenship and Immigration Services (USCIS), as well as the Executive Office of Immigration Review (EOIR) of the U.S. Department of Justice (DOJ).

If this alphabet soup of agencies is confusing to an educated American, imagine the poor non-English speaker trying to understand and navigate this system without the help of an advocate.

Migrants and asylum seekers are first met after they cross the border by the border patrol (a part of U.S. Customs and Border Protection​), whose job it is to separate those subject to expedited removal from those seeking asylum.

This is a major hurdle for asylum seekers according to an investigation conducted by Elizabeth Cassidy and Tiffany Lynch, staff to the U.S. Commission on International Religious Freedom (USCIRF). Their report, "Barriers to Protection: The Treatment of Asylum Seekers in Expedited Removal," was approved and published by USCIRF. It is a follow up to a major, Congressionally-authorized study that USCIRF released in 2005.

I am the chair of the commission, but the opinions expressed here do not necessarily represent the views of USCIRF.

While visiting the border, Cassidy and Lynch observed "certain CBP officers' outright skepticism, if not hostility, toward asylum claims." The officers believe that these people are simply economic migrants and not legitimate asylum seekers.

No one fears losing their job for being too strict in screening out asylum seekers, but if an admitted person is a criminal or terrorist, God help the officer who let them in.

Too often those stopped at the border are not informed by Customs and Border Protection officers of their right to ask for protection if they have fear or concern about being returned home.

In fact lack of information is endemic to the whole process. According to Cassidy and Lynch, "Detained asylum seekers with whom USCIRF met lack any real understanding of their rights, responsibilities, and, if relevant, the next steps in their asylum cases."

And rather than passing asylum seekers on to U.S. Citizenship and Immigration Services​ for determination of their status as required by law, Border Patrol agents are themselves passing judgment on the people when their job is simply to divide those claiming asylum from those who do not. This is the equivalent of the cop on the beat being prosecutor, judge, jury, and executioner.

The USCIRF report describes "flawed Border Patrol internal guidance that conflates CBP's role with that of USCIS." "We were very concerned to discover that Border Patrol is instructing its agents on how to determine credible fear when that is the role of USCIS, not Border Patrol. This reflects a fundamental misunderstanding of the expedited removal process," said Cassidy.

In other words, Border Patrol officers are not only biased against asylum seekers, they are not even being accurately instructed in proper procedures for handling them.

The USCIRF report recommends that U.S. Customs and Border Protection​

Sadly, Customs and Border Protection is not the only part of the process that is broken.

After an initial interview, Customs and Border Protection turns those seeking asylum over to Immigration and Customs Enforcement (ICE).

While in ICE detention, those who claimed fear of persecution or torture are screened by U.S. Citizenship and Immigration Services (USCIS) asylum officers to determine if their fear is credible, defined as "a significant possibility" and thus establishing eligibility for protection.

If USCIS finds the person has a credible fear of persecution or torture, the asylum officer places the non-citizen in removal proceedings before an Executive Office of Immigration Review​ immigration judge, in which he or she may apply for asylum.

The USCIRF investigators found that USCIS's 2014 revised lesson plan for training asylum officers and a new detailed interview checklist used by them "may have moved what should be a screening interview closer to a full asylum adjudication."

The USCIRF report recommends that U.S. Citizenship and Immigration Services​:

Not surprisingly, there are also problems with how ICE handles asylum seekers.

The authors found that "ICE continues to detain asylum seekers before their credible fear interviews, and, in some cases even after being found by USCIS to have credible fear, under inappropriate penal conditions." Cassidy and Lynch further discovered that ICE's detention of children seeking asylum is in violations of its own policies and is totally inappropriate.

"We are disappointed that despite some positive initiatives by ICE to develop civil detention facilities more appropriate to the detention of asylum seekers, we have seen a regression so that the vast majority of asylum seekers are detained in prison-like conditions," said Lynch. "We continue to call for USCIRF to detain asylum seekers only in civil facilities and to favor release policies."

Although the ICE's 2009 directive on parole and its increased use of alternatives to detention have improved opportunities for release of asylum seekers, ICE has failed to develop uniform procedures to determine bond amounts. And it extensively uses ankle bracelets rather than other alternatives, without individually assessing each asylum seeker's non-appearance risk.

The USCIRF report recommends that U.S. Immigration and Customs Enforcement

Because of a lack of funding and the prioritizing of the enforcement aspects of expedited removal, delays and backlogs are extensive at both U.S. Citizenship and Immigration Services​ and the Executive Office of Immigration Review.

In addition, some EOIR judges falsely believe that the interviews done by Customs and Border Protection are extensive and complete. As a result, they sometimes don't ask questions that would elicit the information supporting the seeker's case. Since asylum seekers rarely have a lawyer to represent them at these hearings, they are at the mercy of the system.

The USCIRF report recommends that the Executive Office of Immigration Review

At the request of Congress, USCIRF first examined the expedited removal process in 2005, but sadly many of its recommendations were not implemented. It is time for the government to take seriously USCIRF's recommendations.

Department of Homeland Security needs to appoint a high-ranking official with sufficient authority and resources to make the reforms necessary to ensure the protection of asylum seekers in expedited removal and to oversee implementation.

The DHS Office of Inspector General should audit the expedited removal process for compliance with laws and policies regarding the protection of asylum seekers.

Congress also needs to increase funding for the expedited removal process to enable USCIS and EOIR to address backlogs, conduct timely adjudications, and provide due process. Congress also should consider authorizing and funding an independent, comprehensive examination of the treatment of asylum seekers in expedited removal that is as extensive as USCIRF's 2005 study.

It should also follow USCIRF's recommendation to have the Government Accountability Office conduct a study to find out what actually happens to asylum seekers who are returned to their home countries. Are they suffering persecution and even death, or are they safe? There is anecdotal evidence from journalists and NGOs that returned seekers suffer and even die.

People who approach the United States seeking asylum deserve to be treated with respect and dignity. They have already suffered extensively in their native lands, and putting them through bureaucratic torture here is both unchristian and un-American.