Nigeria, a land of promise and problems 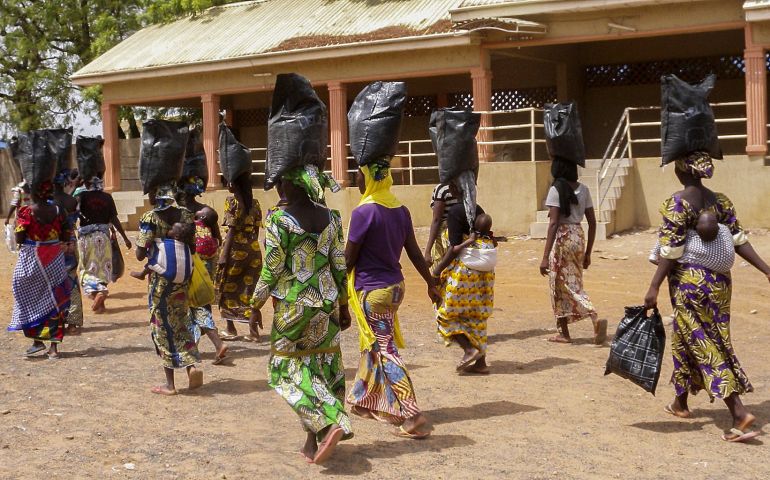 Displaced people who fled areas of conflict waged by Boko Haram militants carry food supplies on their heads April 15 as they walk away from a special prayer service at St. Theresa's Cathedral in Yola, Nigeria. (CNS/EPA)

The Nigerian people are hospitable and hard-working, but they face huge problems, especially government corruption and incompetence, sectarian violence, and an almost total dependency on oil revenues.

"The three biggest problems in Nigeria are corruption, corruption, and corruption," explained one person I met during my visit last week as part of a delegation from the U.S. Commission on International Religious Freedom (USCIRF). The views in this article are my own and not those of the commission or the visiting delegation.

Oil has been both a blessing and a curse for Nigeria: a blessing in that it provides huge revenues; a curse because everyone wants to go into politics so they can get a piece of the pie. Rather than setting up a business, the easiest and most practical path to prosperity is through corruption.

The corruption extends from the cop on the local beat all the way to highest levels of government. For example, the unemployed son of a police commissioner wears a $50,000 watch and drives around in a $300,000 car. It would be impossible for him to pay for such extravagant luxuries without the money his father gets from corruption.

The school system also suffers from corruption as teachers demand payment for grades and students get into universities without being able to read.

Not only does small-time corruption pervade the country, corruption on a massive scale occurs at the highest levels. So much money is taken from the system that often, government employees like teachers are not paid because the money has been stolen through corruption or given out in attempts to buy elections.

Corruption might be forgivable if the government actually functioned well, but essential services like water, power and security are not dependable. Parts of Abuja, the capital, do not receive water at least a couple of days a week, so residents have to have reservoirs to store water for the off days. Likewise, anyone needing dependable electricity must have a backup generator.

The rule of law is lacking because the police lack the training to investigate crimes. If there is sectarian violence, the police either ignore it or arrest a group of people and throw their confiscated guns in a pile.

When the prosecutor comes, he finds it impossible to charge anyone because individual guns cannot be linked to individual prisoners. So even if he discovers the murder weapon, he does not know whose gun it is. The police present him with signed confessions, but he knows that these were probably forced. The result: Everyone goes free.

This lack of legal justice makes people turn to revenge killings or vigilante justice: "Some of my group were killed, so I will kill some of yours."

The police need training in investigative techniques as well as training in nonviolent crowd control, human rights, and basic police procedures. Instead, the police academy is still training cadets to ride horses. The U.S. government is working with the Nigerian police on designing a new curriculum.

But the principal focus of our delegation was religious freedom and sectarian violence.

Many we talked to made the case that religious freedom is not an issue in Nigeria. The government does not persecute any religious group. Churches and mosques can operate independently of state control.

There is a lot of truth to this. In fact, some would like the government to crack down on Muslim and Christian clergy who preach hate.

On the other hand, in the northeast of Nigeria, Boko Haram is forcing Christians and Muslims to follow its particular form of Islam or die. USCIRF not only criticizes countries that persecute religious groups, but also those that fail to protect religious groups from persecution and violence by others. See the 2015 USCIRF report on Nigeria.

Some of those we met denied that violence in Nigeria (outside of Boko Haram in the northeast) was religiously motivated.

Fights in the middle part of the country are principally between cattle breeders and farmers, they say, just as we had in the Old West. The fights are over land, water and other resources. The conflict is exacerbated by the fact that farmers and cattlemen are from different ethnic groups, with the cattlemen predominantly Muslim and the farmers predominantly Christian.

In support of their position that Nigerian conflicts are not religious, they point to the southwest, were Muslims and Christians live together fairly peacefully. Here, they are from the same ethnic group and are not in competition for resources. The southwest is one of the most developed areas of Nigeria.

I found this argument compelling until I talked to more people and discovered that even if the original fight was over resources, religion is playing a growing role.

"If a Muslim farmer kills a cow, the Muslim cattlemen do not respond with AK-47s," a person we met explained. "They go to the Muslim leaders, who adjudicate the dispute."

But a dispute between a Muslim and a Christian can easily turn to violence because there is no effective government to deal with it. It is the Wild West without Marshal Matt Dillon.

Religious tensions appear to be getting worse.

"When I was in university, we had debate clubs, science clubs, and other clubs where Muslims and Christians intermingled," one Nigerian explained. "Now, there are Christian and Muslim organizations that students join."

Some see the rise of Boko Haram as the turning point in Nigerian history. Initially, it received support from some Muslims in the northeast because they felt abandoned and excluded from their fair share of resources from the federal government, but when it turned violent, most Muslims pulled away.

When Boko Haram took over a village, a few Muslims openly joined then lorded it over their Christian neighbors and stole their property.

"I don't see how we can ever live with them again," said one Christian who had to flee his home.

Boko Haram also gave fundamentalist Christian preachers all the ammunition they needed to preach hatred of Muslims. For the Pentecostals, the fight with the Muslims is a sign that the end times are approaching. This is a struggle between good and evil without much room for dialogue.

Thus, what may have started as a struggle over resources and political power has become more and more identified as a sectarian dispute.

An alternative view is that interreligious tensions were already there under the surface and Boko Haram simply made them explicit.

Sectarian tensions tend to increase before and after elections. Many Christian preachers were telling their flocks that they had to vote for the Christian incumbent, Goodluck Jonathan, in the March election or they would not be good Christians. Likewise, many Muslim preachers did the same for the Muslim candidate, Muhammadu Buhari.

But significant numbers of Christians were fed up with the corruption and incompetence of  Jonathan's government and voted for change; not necessarily for Buhari, but against Jonathan.

Buhari's challenge will be not only to defeat Boko Haram and stop corruption, but also to unite the religious factions in his country.

At the end of our visit, we met with a human rights leader who depressed us with a litany of problems and abuses. We told her, "Tell us something positive before we go home. Is there any hope?"

"We are still here," she responded.

The most positive news to come out of Nigeria in a long time was the successful and peaceful transfer of power from one democratically elected government to another. After the 2011 election, there was widespread violence in the north as supporters of the Muslim candidate contested the results.

All the experts had predicted violence again after this year's election no matter who won, but the overwhelming vote (54 percent) for Buhari made his victory indisputable. The early and public concession of defeat by Jonathan also eased tensions.

Prior to the election, both the U.S. and European governments made clear that any leader inciting violence after the election would be banned from entering their countries. This sent a signal to the elites to behave.

The other good news in Nigeria is its people. We met with many religious and civil society leaders who are trying to make Nigeria a better place by empowering women, fighting corruption, and fostering interreligious harmony.

Cardinal John Olorunfemi Onaiyekan of Abuja is a leader in interreligious dialogue, as is the Anglican Archbishop Josiah Idowu-Fearon of Kaduna. The archbishop was recently appointed the secretary general of the Anglican Consultative Council and will be moving to London.

Nor are the Nigerians afraid to look for new solutions to old problems.

For example, the mostly Muslim cattlemen's association recognizes that the era of cattle herds ranging all over Nigeria is over. Now, they want land reserves set aside for their people so that they will not come in conflict with farmers. They recognize that farmers and cattlemen need not be in competition, but can live and do business together. Making this happen should be a government priority.

Nigerians can be resourceful. Despite being a transit point for much of Africa, they were able to keep Ebola out of their country.

Nigerians are also hard workers. Street vendors are everywhere, working all day to earn just a few dollars to help them and their families survive.

The internally displaced people we met were building new homes out of bricks they made from local mud. They poured cement foundations on which they laid the bricks, put up corrugated roofs, plastered the walls, dug ditches for water pipes, constructed toilets with cesspools, and built places for cooking. They were not waiting for others to help them; they were helping themselves.

If the governing elites worked as hard, Nigeria would be a prosperous country.

For my pre-visit column on Nigeria, see "Religious tensions in Nigeria."

World | Nigeria, a land of promise and problems

In Nigeria, archdiocese provides relief to victims of fire disaster