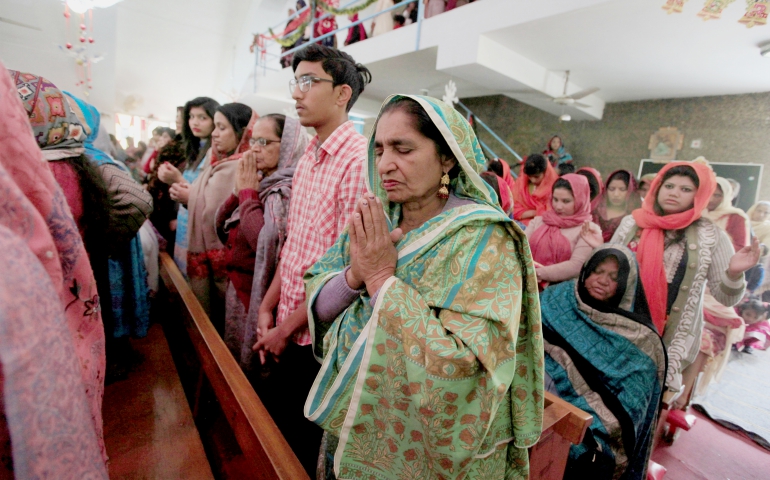 Christians pray during Mass at Our Lady of Fatima Church in Islamabad in December 2016. (CNS/Reuters/Faisal Mahmood)

Pakistani Christian girls have been abducted, raped and forced to marry their rapists, according to human rights lawyers who try to rescue these women from their captors. The abducted girls are forced to convert to Islam, which makes their subsequent marriages legal under Pakistani law.

These are mostly girls from poor families who do not have the power or resources to fight back. Sadly, some families even abandon their child because she is thought to bring shame on the family.

I learned of the plight of these girls when visiting Lahore as a member of the U.S. Commission on International Religious Freedom (USCIRF). The views expressed in this column are my own and do not necessarily reflect those of the commission.

These are some of the women helped by the Centre for Legal Aid, Assistance and Settlement (CLAAS), which is based in Lahore. Their names have been changed to protect their privacy.

The center not only provides legal assistance but also shelters them in safe houses where their predators cannot get them. There are no government programs to help them. In fact, when their predator is their "husband," the police will often take the side of the abductor against the "wife." Sometimes, the only way to protect the woman is to pay off the husband so that he will leave her alone.

Only recently have Hindu marriages been recognized under Pakistani law, and the National Assembly is working on a bill to legalize Christian marriage. Its passage is being delayed because the Christian churches have not agreed on how to deal with divorce.

The tragic situation of these women is accentuated by the reaction of many of their families. The young girl is now seen as disgraced and therefore not marriageable. Some families disown the child because she brings shame to the family. CLAAS has found that if the girl is taught a skill like sewing, the family will sometimes take her back because she can then earn money for the family. Her future is not bright, but it is better than being abandoned on the streets.

These women get little sympathy from the police or government officials who should be protecting them. One Christian member of the National Assembly brushed off the issue when I brought it up with him. He said that these were women who eloped and then had second thoughts. When I objected that 12-year-olds don't elope, he seemed surprised by what I described. I could only conclude that upper-class Christians are as clueless about this phenomenon as anyone else in Pakistan.

The situation of women in countries like Pakistan that have little respect for religious freedom is often horrific. In the West, we often think that religious freedom and women's rights are in conflict, but here we see that a woman's right to choose and follow her own religious beliefs is severely compromised. There is frequently a man (father, brother, husband, uncle) who is forcing her to follow his beliefs.

Sadly, many proponents of religious freedom and women's rights only see conflict when they should see areas of common concern. Only women suffer when women's rights advocates and religious freedom advocates do not work together to protect women's fundamental human right to freedom of religion. United we can do so much more to protect and promote the human dignity and rights of women.