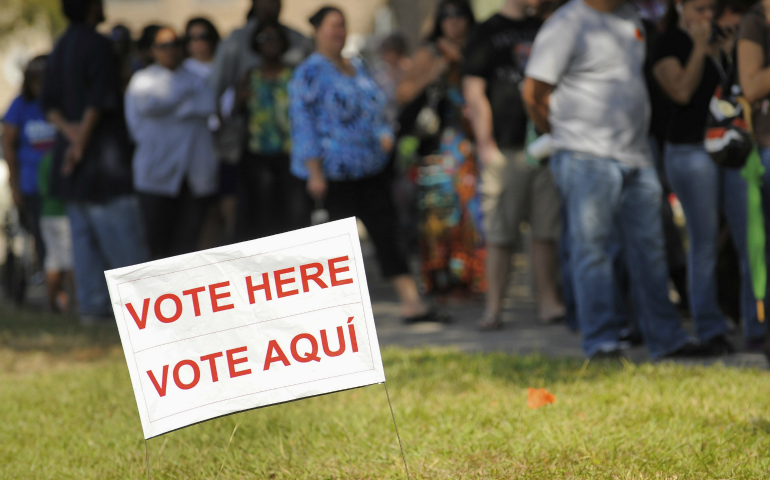 A sign in English and Spanish is seen as people wait to vote in 2012 outside a polling place in Kissimmee, Florida. (CNS photo/Scott A. Miller, Reuters)

Catholics appear to be politically confused; are they Democrats or Republicans? Since 1952, Catholics have voted for Democratic presidential candidates at least 10 times and for Republican candidates four times, with three elections too close to call, according to polling data collected by Mark Gray of the Center for Applied Research in the Apostolate (CARA). See graph below. In almost every case, Catholics voted for the winner or at least the winner of the popular vote, depending on which poll you believe.

Pollsters are also confused about Catholic voters. Did Catholics vote for Donald Trump or Hillary Clinton? Politically, this matters because Catholics make up about 22 percent of eligible voters and usually vote for the winner in presidential elections.

The 2016 media-sponsored exit polls, according to CNN, showed that a majority of Catholics voted for Trump (50 percent to 46 percent for Clinton), which led to much hand ringing by progressive Catholics.

Surprisingly, the Pew Research Center's analysis of the exit polls found that the Hispanic Catholic vote for Clinton (67 percent) was less than that given to President Barack Obama four years earlier (75 percent).

These results delighted conservative Catholics who hoped that Trump appointments to the Supreme Court would finally change American policy on abortion. They were also consistent with the fact that Catholics almost always vote for the winner in presidential elections.

Most journalists don't care about the ANES results because they are released months after the election when the media has moved on. In addition, some of the media have a vested interest in the exit poll's credibility since they paid for it. But for academics, ANES is considered the gold standard of survey research. Academics complain that the media exit polls use people with little training or experience in conducting surveys.

After reviewing the exit polls, Gray told me a couple of weeks after the election that he was going to wait to see the results from ANES before deciding where the Catholic vote went. After looking at the ANES numbers, he is not sure we will ever know whether Catholics went for Trump or Clinton — it is just too close to call.

Pollsters are faced with multiple problems. First, they have to create a representative sample of registered voters. Then, any polling done before the election has to predict which people will actually vote. Polling done after the election may be impacted by the desire of people to say they voted for the winner. And some voters do not want to admit they support a controversial candidate.

Different polls follow different methodologies. ANES, for example, asks some of its respondents days after the election. Exit polls used to rely solely on asking people as they came out of the polling place, but now with so many people voting early or by mail, they have had to adjust. Academics have also found that they get different results depending on whether people are asked by a person or respond online. People appear to be more honest online.

There is also the fundamental problem that as the sample size is decreased from all voters to Catholics and then to Hispanic Catholics, the margin of error increases. Journalists and readers pay little attention to the margin of error, leading them to think that a few percentage points are actually a big deal when in fact they might be statistically insignificant.

Editorial aside: Why don't we teach statistics in high school? It is easier and a lot more useful than calculus.

Finally, it may be safer to say that Catholics almost always vote for the winner of the popular vote (note Al Gore and Hillary Clinton), rather than the winner of the election. But that depends on which poll you believe.