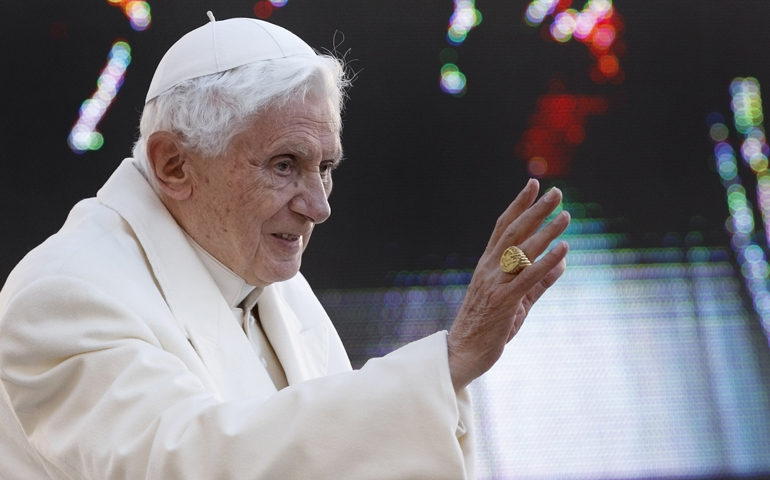 Pope Benedict XVI waves as he arrives to lead his final general audience Feb. 27, 2013, in St. Peter's Square at the Vatican. (CNS/Paul Haring)

I spent so much time in the last couple of weeks talking to reporters about the legacy of Pope Benedict XVI that I did not have a chance to put my thoughts in writing.

Whenever a reporter asks me about Benedict, I first acknowledge that I have some history with him. One of Cardinal Joseph Ratzinger's last actions as prefect of the Congregation for the Doctrine of the Faith was to tell the Jesuit superior general that I needed to be replaced as editor of America magazine, so I cannot claim to be an indifferent observer. Perhaps this is another reason I did not meet my deadline. This was a painful period in my life, so I warn reporters (and readers) that my own experience can bias my views.

The temptation with any pope, even Francis, is to see him as black or white, all bad or all good. Nothing is that simple, especially a human being.

There is much to praise in the papacy of Pope Benedict. If for no other reason, he will be remembered for centuries as the pope who was not afraid to resign when he felt it was best for the church. Such humility, courage and trust in the Spirit are not easy virtues when everyone around you is telling you that you are indispensable.

The resignation caused former supporters to turn on him and former critics to praise him. John L. Allen Jr. reports in The Boston Globe that Antonio Socci, a high-profile Italian conservative, has floated the question of whether Benedict's resignation was actually valid under church law. This kind of talk is very dangerous and could lead to schism, but they will get no support from Benedict for such nonsense. Likewise, those who feared Benedict would try to run things from behind the scenes have been proved paranoid.

As prefect of the Congregation for the Doctrine of the Faith, Cardinal Ratzinger was the first Vatican official to take seriously the sexual abuse crisis. He was not perfect, but he listened to American bishops and learned faster than anyone else in Rome, including Pope John Paul II. He supported a zero-tolerance policy on abuse and threw hundreds of priests out of the priesthood for abusing minors.

Pope Benedict also started the reform of Vatican finances, which is now beginning to bear fruit under Pope Francis. It was Benedict who finally said, "Enough," and demanded that the Vatican observe the standards set by Moneyval, the European agency that deals with money laundering. Up until Benedict, the Vatican always argued that it was unique and could not be judged by outsiders. Now Vatican finances are periodically reviewed by Moneyval, which publishes its reports for everyone to see. All of the subsequent financial reforms have flowed from this decision by Benedict.

Sadly, the media were so focused on what he had to say about abortion, gays and condoms that what he had to say on other issues was ignored. People forget that he, like John Paul, was opposed to both Gulf Wars, and they proved wiser than all the policy wonks in Washington.

And while Pope Francis is getting lots of attention for his views on capitalism, Benedict strongly defended the role of government in the regulation of the economy in Caritas in Veritate. He was no fan of libertarian capitalism. He went further in saying that government has a role in the redistribution of wealth. Not even liberal Democrats say things like that. On economic issues, Benedict was to the left of President Barack Obama; he was even to the left of Nancy Pelosi.

In fact, Benedict's views on the relationship between religion and politics were quite sophisticated, as articulated at Westminster Hall in London and at the German Parliament, the Bundestag in Berlin. He was not a single-issue ideologue, and he recognized the role of prudence in political decision-making.

Pope Benedict's strength and weaknesses came from his background as a German professor, which was his life before Pope Paul VI appointed him archbishop of Munich in 1977*. His was the life of the mind where clarity of thought was prized.

As a German professor, he was used to lecturing students who took down his words, memorized them and gave them back in exams. As a professor, he used technical language that might mean one thing in the classroom but something completely different on the street. Thus, he could say most Protestant churches were not true churches because he had defined "church" as a Christian community with a legitimate episcopacy. He could also use a word like "disordered," which for him had philosophical meaning while on the street it would be interpreted as a psychological term.

In German universities, students do not challenge or question their teachers, which is why the 1968 student uprisings in Tübingen were so shocking to him. His views on the role of the magisterium, the church's teaching authority, were a reflection of his background as a German professor. The word "magisterium" comes from the word "magister," which means "teacher."

As prefect of the Congregation for the Doctrine of the Faith, he saw his role as being like that of a German professor. Those who questioned or did not provide the right answers were flunked and dismissed from school. He saw to it that theologians raising questions or having contrary views were removed from seminary faculties. Priests with these views could never become bishops. In this, he and John Paul were on the same page.

The tragedy of Ratzinger was that he related to other theologians not as colleagues and peers but as graduate students to be corrected or junior faculty to be denied promotion. He was chairman of the department, and his views would prevail.

The result was devastating for the intellectual life of the church. Creative minds were removed from seminary faculties; priest theologians were silenced or self-censored. The free discussion of the Second Vatican Council was replaced by suspicion and accusations of heresy. Cooperation between theologians and bishops, which was a hallmark of Vatican II, gave way to suspicion and antagonism.

Benedict's attempts to control theologians failed. It created bitterness and a gulf between academia and the hierarchy, which hopefully will mend under Francis. It also failed because theology has become a lay vocation, and lay theologians are not subject to obedience as are priests and religious. It is impossible to silence a lay theologian. Attacking them will only help sell their books.

Why should anyone care about fights between academics and the hierarchy? If the church is to respond intelligently to the challenges of the 21st century, then bishops and theologians must work together as they did at Vatican II. Both sides must be willing to listen and learn.

To explain the Christian message to people of the 21st century will require the same kind of creativity shown by Augustine and Aquinas. We cannot simply quote them; we must imitate them. Augustine took the best thought of his age, Neoplatonism, and used it to explain Christianity to his time. Aquinas took the rediscovered Aristotle to explain Christianity to his generation. Theologians must be free to do the same today. Remember, Aquinas had his books burned by the archbishop of Paris.

In his first Easter homily as pope, Benedict said the risen Christ is the next step in human evolution. I wish he had developed that thought, but that is a way of thinking that would be attractive to people today.

To simply call Pope Benedict a conservative is a way of avoiding thoughtful analysis of a complex character. He gave and continues to give much to the church. He should be respected and honored for that while being clear-eyed about his limitations.

*An earlier version of this column incorrectly identified the pope who appointed Ratzinger to Munich.