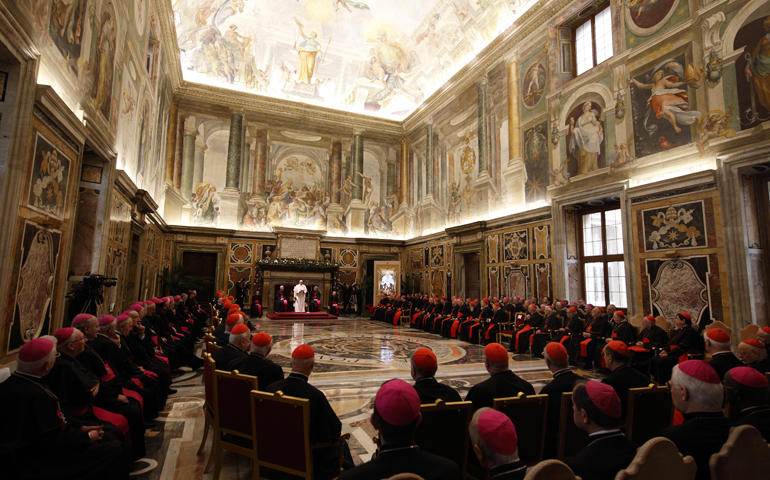 Pope Francis speaks during an audience to exchange Christmas greetings with members of the Roman Curia Dec. 22 in Clementine Hall of the Apostolic Palace at the Vatican. (CNS/Paul Haring)

Pope Francis has talked a lot about reforming the Vatican Curia, but in reality, he should be given only a C+ for his achievements.

True, he has done some important things.

First, he has changed the very nature of the College of Cardinals by ignoring traditional cardinalatial sees and, for the most part, appointing as cardinals bishops who reflect his own views.

In the past, there were certain archdioceses that everyone presumed would be headed by a cardinal archbishop. Even if a pope's predecessor appointed the archbishop, the new pope was expected to promote the archbishop of a cardinalatial see to a red hat.

Pope Francis has ignored this tradition and passed over cardinalatial sees like Venice, Philadelphia, and Los Angeles to appoint bishops in places that rarely if ever have had a cardinal, like Indianapolis. He chooses the man rather than the place.

This is the most revolutionary thing Francis has done in terms of church governance. He is doing everything possible to make sure that his legacy is continued by insuring his successor is someone who reflects his views. If he had simply promoted the holdovers of John Paul and Benedict, it would have been much harder to protect his legacy, granted that his papacy will probably not be a long one.

For this change alone I was tempted to give Pope Francis an "A." I am happy that he is increasing the odds that the next pope will be like him, and all my progressive friends are certainly pleased with these appointments.

But then I had to be honest with myself by asking the question, "How would I have reacted if Pope John Paul or Pope Benedict had done the same thing?" Frankly, I would have been outraged. Progressives would have seen it as another example of papal centralization and of the old guard clinging to power.

Put another way, suppose the next conclave is the mirror opposite of the last one. Suppose it makes a mistake and elects someone the cardinals think is a progressive or moderate and in fact is a reactionary. He will then be able to use the Francis' precedent to fill the College of Cardinals with reactionaries.

I confess, despite my reservations, I would have encouraged Francis to do exactly what he did, but I would have warned him of the possible negative consequences.

All of this reminds us that every reform can have unintended consequences. That is why Pope Francis does not get an "A" for this reform.

His second important action on curial reform has been Pope Francis' emphasis on changing the culture of the Curia. Elsewhere I have argued that changing structures and personnel in an organization, whether school or police force, will have little effect unless the culture of the institution is also changed. Pope Francis understands this well.

By word and example, Pope Francis has waged a frontal attack on clericalism and privilege from the first days of his papacy. He wants bishops and priests to be servants not princes over their flocks. While social scientists speak of changing the culture of an institution, he quite correctly uses the Christian language of conversion.

Again, for this I would like to give Pope Francis an "A," but clericalism could easily return under a different pope. In addition, this battle against sin is never-ending (semper reformanda) and will never be won because original sin is at the core of our humanity.

Nor will filling the Vatican with progressives solve the problem because they can fall to the same temptation to arrogance as everyone else. So, this is a battle worth engaging, but the pope needs to understand that this war can never be won.

On financial reform, Pope Francis gets a C+ for not having finished the job. The Vatican Bank is in pretty good shape. APSA, the finance and investment office, has made some progress. But there are large pockets of money, especially that controlled by the Congregation for the Evangelization of Peoples, that need to be looked at more closely.

What needs to be done is clearly outlined in the 2015 report by Moneyval, the international agency dealing with money laundering. It indicated that the Vatican had still not met seven out of 16 key and core recommendations needed to become more financially transparent and compliant with international norms. Complying with Moneyval's recommendations is the absolute minimum the Vatican must do. Pope Benedict gets the credit for initiating this, but Francis must bring it to completion.

I acknowledge that financial reform takes time, but it is remarkable that no prosecutions have resulted from any of the investigations into Vatican financial corruption. The pope approved the prosecution of a Vatican leaker, whom he recently released from confinement, but so far no one has been prosecuted for financial crimes. One suspects that he does not want to put a senior cardinal on trial. It is also disappointing that the pope has backed off from having an external audit of Vatican finances.

Much attention has been given to merging a number of Vatican offices into three new multi-departmental offices for Laity, Family and Life, for Promoting Integral Human Development, and for communications. During his recent address to the Roman Curia, he indicated that he intends to merge or close other offices as well. The hope is that these mergers will lead to better coordination and cooperation among departments, but the pope hopes it will also lead to a leaner Curia.

Pope Francis has a disdain for bureaucracy that often makes him sound like a Republican. The pope wants a smaller Curia with a smaller budget. Merging these offices is a way of reducing costs by eliminating some high-level Vatican officials. Although he does not want any lay employees fired, downsizing through attrition should be easier in these merged offices.

Merging offices means reducing the number of cabinet-level officials with whom he needs to meet, which makes sense for someone running a 1.2-billion-member organization. On paper, too many people reported directly to the pope in the past, which meant in reality that most of them reported to the secretariat of state, the Vatican's top dog. Merging these offices may give the new heads more authority and independence from State, as well as allowing the pope to deal with them more directly.

The new communications office will be the biggest challenge because it is combining older departments with different cultures and technologies in an area where technology is changing rapidly. Let's face it; if the secular world is at its wits' end trying to deal with today’s communications revolution, how can we expect the Vatican to get it right in the first try? Not only do Vatican communications require a major shakeup, they must remain flexible in the future to respond to changing technologies and events.

Ideally, the head of communications needs extraordinary leadership skills that can inspire and unite a disparate group of offices who do not want to change their ways. That would require someone like Jesus with an MBA, but sadly he is not available.

I hate to say it, but the Vatican communications office needs a Rupert Murdoch, someone with a clear vision who will fire and replace anyone who does not support that vision. Such ruthless tactics would be anathema to Francis the pastor. But the consequences of Francis' unwillingness to fire people or spend more money is that the Vatican will get new blood only when people die or retire. A communications office without new blood will never catch up with contemporary media. This office will remain in a muddle for a long time.

Finally, there are the reforms that Francis has failed to even consider.

Foremost among these is the need to stop making Vatican officials either bishops or cardinals. The papal court must die and be replaced by a professional civil service. As long as Vatican officials are bishops and cardinals, they will see themselves as princes of the church. They will see themselves as a governing elite between the pope and the college of bishops rather than servants, staff to the pope as head of the college of bishops.

For me, this was the most disappointing thing about the pope's New Year's address to the Curia. There was no mention of the relationship of the Curia to the college of bishops. The theology of the address was as monarchal as that given by earlier popes.

Sadly, the references to synodality in his address to the Curia were in urging officials to "avoid fragmentation caused by factors such as the multiplication of specialized sectors, which can tend to become self-referential."

That shrinks the theology of synodality from involving the college of bishops to simply having Vatican offices cooperate with each other. That is an impoverished synodality.

The pope clearly knows what true synodality is because he practiced it with the Synod of Bishops, but he has not worked out how the Curia relates to the synod and the college of bishops.

A robust synodality would change the way congregations and councils operate.

These committees should be reconstituted with membership coming from diocesan bishops with no Vatican members. The chair should be a diocesan bishop or archbishop, not the head of the Vatican office. The membership should be composed of bishops knowledgeable in the topics of the office. For example, the Congregation for Divine Worship could be made up of bishops who are liturgical experts or chairs of episcopal conferences' liturgy committees.

Under such a system, the committees would be responsible for advising the pope and providing oversight over the Vatican offices. Committee meetings could be held using technology available for video conferencing so that they could meet on a regular basis without spending money and time on traveling to Rome.

As part of rethinking Vatican offices, attention must also be given to the principle of subsidiarity — allowing appropriate decisions to be made at the local level rather than in Rome. Many decisions currently made in Rome should be made at the diocesan or conference level.

In addition, there is need to separate the judicial from the legislative and executive functions in the Vatican. While we still look on the pope as the supreme legislator, executive, and judge in the church, the same people in the Vatican should not be involved in making policy, executing it, and passing judgment on violations of policy.

The C+ I have given Pope Francis is a midterm grade. He still has time to truly reform the Vatican, but that will not happen unless he understands what true reform really means. It does not serve the pope well to tell him everything is fine.