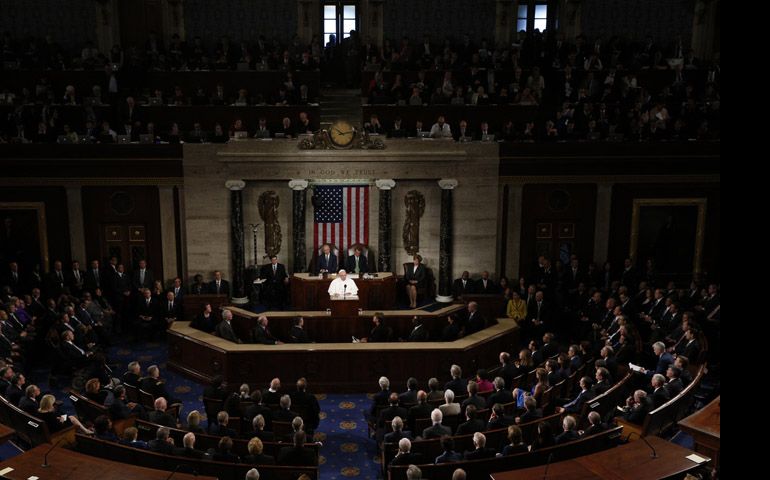 Pope Francis addresses a joint meeting of Congress at the U.S. Capitol in Washington Sept. 24. (CNS photo/Paul Haring)
This article appears in the Francis in the United States feature series. View the full series.

While in the United States, Pope Francis exercised his prophetic office by comforting the afflicted and afflicting the comfortable, but he did it with a soft and respectful voice.

Before his arrival, some of his critics said that he hated America and didn’t understand it, he was going to lecture Congress, he only talked about the poor and the rich and not working people, and he did not recognize that capitalism had brought millions of people out of poverty.

During his visit, especially in his talk to Congress, he confounded all his critics.

That Pope Francis loves the American people was clear in every encounter he had with individuals or crowds of people. He reached out with love and warmth to young and old, to everyone with whom he came into contact.

He also had clearly done his homework in studying America, which he called “the land of the free and the home of the brave.”

He studied our founding documents, especially the Declaration of Independence, which is our most faith-based document. Both before Congress and at Independence Hall he quoted from it: “We hold these truths to be self-evident, that all men are created equal, that they are endowed by their Creator with certain unalienable rights, that among these are life, liberty and the pursuit of happiness.”

Nor did he lecture Congress, rather he told them he came “to dialogue with all of you.”

And rather than ignoring the middle class, he specifically spoke of “the many thousands of men and women who strive each day to do an honest day’s work, to bring home their daily bread, to save money and -- one step at a time -- to build a better life for their families.”

He went on to say that “These are men and women who are not concerned simply with paying their taxes, but in their own quiet way sustain the life of society” offering “a helping hand to those most in need.”

He even spoke of business as a “noble vocation, directed to producing wealth and improving the world," but he praised it “especially if it sees the creation of jobs as an essential part of its service to the common good.”

And to those who said he ignored how capitalism had improved people’s lives, he acknowledged that progress has been made in many parts of the world. “How much has been done in these first years of the third millennium to raise people out of extreme poverty!”

But unlike his critics, he was not willing to stop there: “much more still needs to be done.” To Congress he said, “I would encourage you to keep in mind all those people around us who are trapped in a cycle of poverty. ... The fight against poverty and hunger must be fought constantly and on many fronts, especially in its causes.”

Knowing his audience, he spoke with a softer voice than he has elsewhere. There was no talk of the "unfettered pursuit of money" being the "dung of the devil," but he still made his points clearly. “If politics must truly be at the service of the human person, it follows that it cannot be a slave to the economy and finance,” but build the common good and sacrifice “particular interests in order to share, in justice and peace, its goods, its interests, its social life.”

To the United Nations he was more blunt, condemning "a selfish and boundless thirst for power and material prosperity" that "leads both to the misuse of available natural resources and to the exclusion of the weak and disadvantaged."

Some of his strongest words to Congress were in defense of immigrants. Playing on the opening words of the U.S. Constitution, he said to Congress, “We, the people of this continent, are not afraid of foreigners, because most of us were once foreigners.”

He personalized this by mentioning that he himself is the son of immigrants and pointing out that “you are also descended from immigrants.”

He also spoke of refugee crisis, not just in Europe, but also the thousands of persons who on this continent “travel north in search of a better life for themselves and for their loved ones, in search of greater opportunities.”

He made no distinction between political and economic refugees, but rather asked, “Is this not what we want for our children?” Despite the great numbers, he asked that we “view them as persons, seeing their faces and listening to their stories, trying to respond as best we can to their situation.”

To much applause, he quoted the Golden Rule to Congress: “Do unto others as you would have them do unto you.” For Francis, the lesson is clear: “Let us treat others with the same passion and compassion with which we want to be treated. Let us seek for others the same possibilities which we seek for ourselves. Let us help others to grow, as we would like to be helped ourselves.”

Francis also said that the Golden Rule applied to “our responsibility to protect and defend life at every stage of its development,” which was applauded by Republican members of Congress because it was heard as a condemnation of abortion. But Francis immediately pivoted and declared that this conviction had led him to advocate “the global abolition of the death penalty” and said “that a just and necessary punishment must never exclude the dimension of hope and the goal of rehabilitation.”

Nor did Francis hold his fire on environmental issues, which he brought up at the White House, Congress and the United Nations. He urged Congress to courageous and responsible action “to avert the most serious effects of the environmental deterioration caused by human activity,” which could not have pleased climate change skeptics.

“Now is the time for courageous actions and strategies, aimed at implementing a culture of care and an integrated approach to combating poverty, restoring dignity to the excluded, and at the same time protecting nature.” At the White House, he went so far as to practically endorse President Obama’s “initiative for reducing air pollution.”

Francis emphasized “that climate change is a problem which can no longer be left to a future generation.” And at the United Nations he stressed that any harm done to the environment is harm done to humanity. Man can “use creation for the good of his fellow men and for the glory of the Creator; he is not authorized to abuse it, much less to destroy it.”

Some of the pope’s most inflammatory words were directed toward the arms trade, which sells “deadly weapons … to those who plan to inflict untold suffering on individuals and society.” This is being done “simply for money: money that is drenched in blood, often innocent blood. In the face of this shameful and culpable silence, it is our duty to confront the problem and to stop the arms trade.”

Congress applauded these words, but since the United States is the largest arms seller in the world, it is unlikely to do much about it.

He also called on the United Nations "to work for a world free of nuclear weapons, in full application of the non-proliferation Treaty, in letter and spirit, with the goal of a complete prohibition of these weapons."

Pope Francis had words of praise for diplomacy. Without mentioning either Cuba or Iran, before Congress he praised efforts “help overcome historic differences linked to painful episodes of the past.”

“When countries which have been at odds resume the path of dialogue—a dialogue which may have been interrupted for the most legitimate of reasons—new opportunities open up for all,” he told Congress. “This has required, and requires, courage and daring, which is not the same as irresponsibility. A good political leader is one who, with the interests of all in mind, seizes the moment in a spirit of openness and pragmatism.”

Before Congress, he condemned polarization which divides the world into good and evil. "To imitate the hatred and violence of tyrants and murderers is the best way to take their place," he said. "Our response must instead be one of hope and healing, of peace and justice." Although he was talking about world divisions, his words also could apply to partisan divisions in our country.

Pope Francis challenged Congress and the American people on immigration, refugees, poverty, and the environment, but rather than scolding us, he urged us to fulfill our highest ideals and values as a nation. It is hoped that people will be moved by his words and actions, but there is a danger that our partisan biases will filter out what we do not like.

On the other hand, because he is so loved and respected, even those who disagree with him may be willing to take another look at the issues he raised. For example, those who would never listen to Al Gore, Hilary Clinton, or Barack Obama on climate change, may be willing to listen to Pope Francis. Whatever the case, he has put these issues on the national and world agenda so that they have to be discussed.

Five rules for disagreeing with the pope