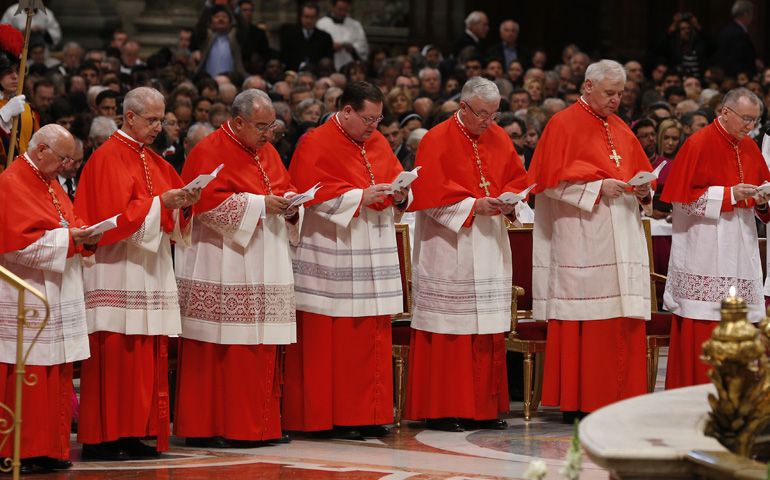 Cardinals participate in the Feb. 22, 2014, consistory at which Pope Francis created 19 new cardinals in St. Peter's Basilica at the Vatican. (CNS/Paul Haring)

With his appointees to the College of Cardinals, Pope Francis has shown just how revolutionary he can be by upsetting the unwritten rules that guided clerical careerists who wanted to advance to cardinal.

In the past, the rules were clear: Make friends in the Roman Curia and get appointed to a cardinalatial see or a high position in the Vatican where a red hat normally comes with the job. Pope Francis has thrown a monkey wrench into that clerical system.

Prior to Francis, there were certain major archdioceses that would expect their archbishops to be made cardinals because their predecessors had been cardinals. Francis has shattered the tradition of cardinalatial sees, not simply made a couple of exceptions to it.

To the shock of the Italian bishops, he passed over Venice and Turin last year and again this year and appointed cardinals from Italian sees that have not had cardinals since the 19th century (Perugia last year, Ancona and Agrigento this year).

Pope Francis has ignored this rule not just in Italy, but around the world, making cardinals out of bishops in dioceses that have never had a cardinal. Last year, it was Les Cayes in Haiti and Cotabato in the Philippines. This year, it is David in Panama, Cape Verde, Tonga, and Myanmar.

If three years ago anyone predicted that these nine dioceses would get red hats, all the Vatican experts would have said the forecaster was crazy.

"The new nominations confirm that the pope is not bound to the traditions of the cardinalatial sees which were motivated by historical reasons in different countries in which the cardinalate was considered almost automatically connected to such sees," explained Vatican spokesman Jesuit Fr. Federico Lombardi.

Clerical careerists who thought they knew the road to becoming a cardinal now find that "the first will be last, and the last will be first."

It looks like working well with other bishops is more important to Pope Francis than connections in the Roman Curia.

Besides ignoring cardinalatial sees, Pope Francis also made only one member of the Vatican Curia a cardinal this year: Archbishop Dominique Mamberti, who in November took Cardinal Raymond Burke's position as prefect the Apostolic Signatura. Previously, Mamberti had been secretary for relations with states, the equivalent of foreign minister in the Vatican.

Since all of the prefects or heads of Vatican congregations were already cardinals, there was no need to make anyone else in the Curia a cardinal.

As a result, the percent of curial officials who will be cardinals after the Feb. 14 consistory is down to 29 percent from 35 percent at the last conclave. This is closer to the percentages at the end of the reigns of Popes John Paul II (24 percent), Paul VI (27 percent), and Pius XII (24 percent). The Curia will lose two more cardinals in September when Italian Cardinal Velasio De Paolis and Spanish Cardinal Santos Abril y Castello turn 80.

Although some, including me, have argued for not promoting members of the Curia, Pope Francis wants his closest collaborators to be cardinals. He told told Elisabetta Piqué in the Argentine daily newspaper La Nación, "The head of a dicastery like the Congregation for the Doctrine of the Faith, the liturgical dicastery or the new dicastery encompassing laity and family as well as justice and peace will always be a cardinal."

On the other hand, one goal of the reform of the Curia planned by Pope Francis appears to be reducing the number of cardinals in the Curia. Francis does not want to hand out red hats simply to reward careerists in the Curia. This would contradict everything he has been preaching about clericalism and careerism in the Curia.

Thus, although Pope Francis will continue to appoint some cardinals from cardinalatial sees and the Curia, these two groups are the primary victims of Francis' reform of the College of Cardinals.

Who wins under Pope Francis' reforms? Clearly, diocesan bishops (bishops who head dioceses) win by increasing their percentage in the College of Cardinals. In fact, every bishop wins because suddenly the possibility opens for any of them to become a cardinal, not just those in cardinalatial sees.

Geographically, we also see some winners and losers. At the 2013 conclave, Africa and Asia each had 9.6 percent of the vote. After the February consistory, Africa will have 12 percent and Asia will have 11.2 percent. This is the highest percentage ever for Africa, while the Asian percentage was only higher in 1998 (11.5 percent). It should be remembered, however, that Africa will lose a cardinal in March when Antonios Naguib turns 80. Thus, the numbers for Africa and Asia are only slightly higher than under recent popes.

Surprisingly, Latin America did not get a boost from its favorite son. At the 2013 conclave, Latin America had 16.2 percent of the electors, but the former archbishop of Buenos Aires, Argentina, kept it steady at 16.8 percent, still lower than its all-time high of 20 percent in 2001.

Pope Francis did not follow the example of John Paul II, who took red hats from Italians and gave them to his former neighbors in Eastern Europe. The Italian contingent was reduced slightly by Pope Francis, from 23.9 percent at the conclave to 20.8 percent now, but this did not help Latin America.

Europe as a whole also lost cardinal electors, from 52.1 percent of the college at the conclave to 45.6 percent today, the lowest percentage ever. It will lose two more in September when De Paolis and Abril y Castello turn 80.

The U.S. contingent was not increased from the 11 it had at the conclave, which means that its percentage fell slightly from 9.4 to 8.8 percent of the college. The U.S. will lose a cardinal elector in April when Justin Rigali turns 80.

Nor is his reduction of cardinals in the Curia revolutionary. It is simply returning their numbers to the levels under Popes Pius XII, Paul VI, and John Paul II.

Ignoring cardinalatial sees also greatly strengthens the power of the pope because he can ignore the appointees of his predecessor instead of simply ratifying decisions made when prelates were appointed to cardinalatial sees. The pope will be able to reshape the college in his own image much faster than in the past.

While progressives may cheer Pope Francis for doing this, they should remember that his successor can do the same -- that is, pass over those prelates Francis appoints to cardinalatial sees.

Methodological note: In counting curial cardinals, I include the vicar of Rome, the secretary to the Synod of Bishops, cardinal chaplains/patrons to military orders, and archpriests of major basilicas. In other words, any cardinal working in Rome who is not a diocesan bishop.

A version of this story appeared in the Jan 30-Feb 12, 2015 print issue under the headline: Francis upsets the unwritten rules.