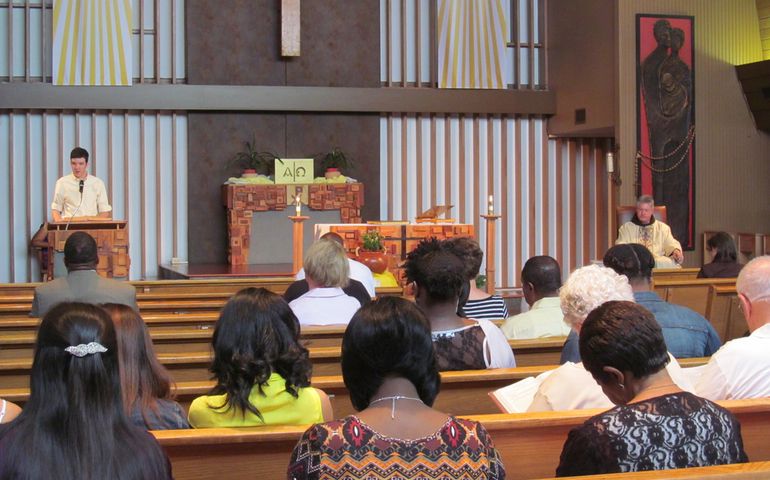 In the past, people were often baptized, married and buried in their local church, but today about half of Americans at some point in their lives have looked for a new congregation, either in their own denomination or in another. This usually occurs when they move.

If you want to attract some of these seekers to your congregation/parish, what do you need to do?

According to a study released this week by the Pew Research Center, what matters to people looking for a new congregation is good preaching, feeling welcomed, and the style of worship of the congregation. Plus, if they have kids, programs for children are important.

When searching for a new congregation:

Of the seven factors presented to respondents, the above five (preaching, welcome, style, location, and educational programs for kids) are the ones that got the most positive response. Fewer people say it was important to have family and friends in the congregation (48 percent) or have volunteer opportunities available (42 percent).

These are the numbers for all Americans who have sought a new congregation. Catholics are significantly different from Protestants.

Catholics who have looked for a congregation have lower response rates on every factor the study asked about except one.

Likewise, in choosing a congregation, the presence of family and friends and volunteer opportunities are less important for Catholics (45 percent and 36 percent) than Protestants (51 percent and 47 percent).

Why is location so important to Catholics?

The importance of location reminds me of CARA’s finding that the availability of parking affects church attendance in areas like Dallas, Phoenix, and Houston.

“There are no parishes you can walk to,” Jesuit Fr. Thomas Gaunt, CARA’s executive director, explained to NCR’s Tom Roberts. “They all drive. And they're overwhelmed. And this is where we're beginning to find the drop in the number of baptisms. The data would suggest it's not secularization—it’s parking. If you're there with a baby, and you're going to have to show up an hour early to try to get a parking spot and get in," he said, that could cut into attendance and those early sacraments.

Or perhaps some Catholics still feel they should attend the closest Catholic church, even if this is no longer required by church law. Maybe Catholics are simply used to going to the closest church and prefer it that way. Or perhaps many Catholics see little difference in preaching, hospitality and the style of worship among Catholic parishes, and therefore don’t expect these factors to be in play when looking for a new parish.

The Catholic church is a franchise where Catholics expect the product to have the same quality from location to location. All other things being equal, Catholics go to the closest church. Why go outside your neighborhood?

As a result, 83 percent of Catholics seeking a new congregation say that it was very or somewhat easy to find one. This compares well to 68 percent for Protestants.

Readers who complain that this doesn't reflect their experience are probably among the more finicky Catholics. You may be part of the 17 percent for whom it is difficult to find a congregation to your liking. (Letters to the editor and comment boxes on web pages suggest NCR readers may be well-represented in the latter category.)

Despite the fact that more Catholics stress location than they do other factors, pastors should not be complacent. Over 60 percent of Catholics looking for a new congregation say preaching, feeling welcomed, and the style of worship are important in their choice. These are numbers pastors can ignore only at their peril.

In addition, we have no historical data to compare with these results, but it is easy to believe that earlier generations were even more complacent than this generation. No social scientist would be surprised if in 10 years this study were replicated and researchers found that Catholics were looking more and more like Protestants in their responses.

What are the practical lessons from this study?

First, parishes have to have a special outreach to people who have recently moved into their territories. Catholics are already inclined to go to their local church; all they need is a nudge. We should not wait for them to find us; we should be proactive in searching them out because this is a critical transition point in their faith lives. New people need to feel welcomed and be invited to the parish. If people do not feel welcomed, they may turn away or not show up.

Second, talk up your parish with visitors and make them feel welcomed. They may be checking you out as a place to attend. This is especially important for parishioners since Catholics are less likely to talk to the priest.

Third, despite the fact that we are a sacramental church, preaching is important to most Catholics, although they may have lower expectations of their ministers than Protestants do. Greater care must be given to training and retraining priests to be good preachers. A poor preacher means an empty church.

The fourth critical factor in the search for a new congregation is the “style of worship.” Sadly, this question is so vague in the Pew study that it is impossible to know what it means. Every respondent undoubtedly had his or her own idea of the ideal style of worship. As a consequence, the responses are not helpful in giving us guidance in liturgical planning.

Anecdotally, parishes that provide a variety of liturgical experiences appear to be most successful.  A Saturday vigil Mass for families with plans for Sunday. An early morning Mass for those working, a 9 a.m. Mass for families with young children, a later Mass for older couples whose kids have left home, and a Sunday evening Mass for young adults. Plus, of course, Masses in different languages for significant ethnic groups. Each Mass would have its own style of preaching and music. Good luck doing all this in a one-priest parish.

Even before seeing this report, I have always argued that what you need for a successful parish is good preaching, good music, a welcoming community, and programs for kids. Sadly, this questionnaire did not ask about music. If it had, we might have been able to argue for increasing the budget for liturgical music.

“If you build it, they will come” was the belief of church leaders in the past. It is becoming less true today.

This report can be read two ways. From one perspective, like other Pew studies, it shows that the Catholic church is usually doing better than Protestant denominations at retaining its adherents and keeping them happy. Or it can be read as a wakeup call that demands a vigorous response.

We should not be complacent. If the church is a field hospital, as Pope Francis says, we can be pleased that we are doing better than the one down the road, but ignoring the problems and concerns of the patients is neither good for the hospital nor good for the patients.

Virginia Sloyan, 'heart and soul' of the Liturgical Conference, dies at 87

Could what happened in Delphi happen in Rome?