Refugees and Christians in Middle East need our help and support 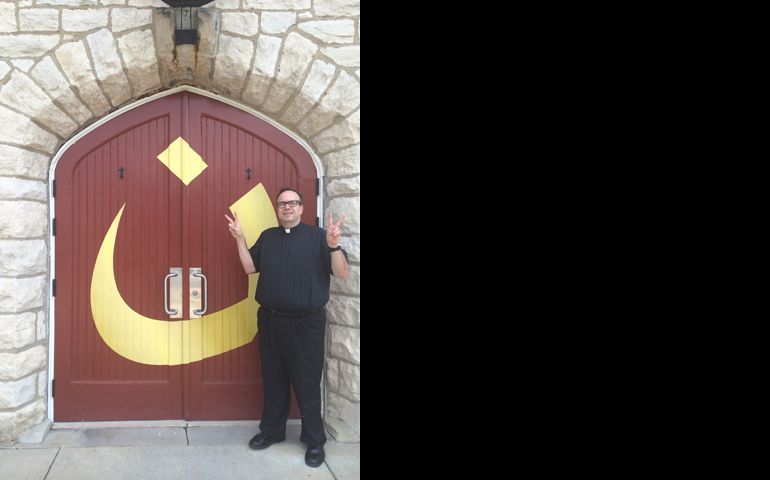 Fr. Jim Sichko, pastor of St. Mark Catholic Church in Richmond, Ky., stands outside the church's doors, which Sichko had painted with an Arabic letter "Nun" July 31, in solidarity with persecuted Iraqi Christians. Islamic State militants in Mosul have marked Christian homes with the letter to stand for Nazarene, or Chrisian. (Courtesy of Fr. Jim Sichko)

The news around the world is tragic and depressing.

The fanatical fighters of the ​Islamic State are gobbling up land and murdering those who believe differently than they do. They are now armed with the American weapons left behind by the Iraqi army, which turned tail when Islamic State fighters arrived in Mosul. So much for years of American training and advice.

The government of Prime Minister Nouri al-Maliki in Baghdad appears incapable of making the compromises that could forge a government of national unity. And will the Iranians make matters worse by intervening to protect their allies and co-religious?

Russian President Vladimir Putin appears poised to invade eastern Ukraine. Neither the downing of MH17 nor Western sanctions have slowed him down. This will not be the walk in the park like his takeover of Crimea, but he does not seem to care if thousands die.

Israel and Hamas have worn each other down with fighting that has caused thousands of deaths and injuries but did not move the region any closer toward sustainable peace.

Libya has fallen into chaos as armed tribal gangs fill the vacuum left by the fall of Moamma Gadhafi. The Central African Republic continues its fratricide, and the Nigerian girls have not been rescued from their kidnappers. On and on; the news is bad.

The response of talking heads in the media is discouraging and unhelpful. Republicans blame all problems on the Obama administration, even though every administration has failed to find a solution to the problems of the Middle East.

Hawks tell us that military intervention is necessary. Around the world, the case for humanitarian intervention by U.S. military is overwhelming until you ask, "Will intervention make matters better or worse?"

Our record for making matters worse is telling. We have not had a successful military intervention since Korea, except perhaps Kosovo and Grenada. Every other military intervention has left the situation worse. We are very good at overthrowing governments, but we don't know how to build them, not even our own in Washington.

The choices are often presented as do nothing, use diplomacy, impose sanctions, or intervene militarily. Are there other alternatives?

I wish I had a grand strategy, but better minds than mine have tried, and the results have just been more blood soaking into the sand. But there are some smaller things that can be done.

The first obvious need is humanitarian aid to help the victims of war, especially refugees. Housing, water, food, sanitation, security and other basic needs can save lives. Aid is especially needed for refugees in Kurdish areas and the Nineveh plains, who have fled the Islamic State fighters. Refugees from Syria are also present in Turkey, Lebanon and Jordan.

Among these refugees are Chaldean Catholic, Syrian Orthodox, Syrian Catholic, and Armenian Christians as well as Muslims those with guns consider heretics.

Safe havens or protected space for unarmed civilians should also be established under U.N. or other protection. Sending in troops to protect unarmed refugees is very different from sending in troops to win a war or overthrow a government. The former has very limited objectives, is purely defensive, and can provide time for diplomacy.

Obama appears to understand the limits of American power by using airstrikes against IS, while admitting "American combat troops will not be returning to fight in Iraq because there is no American military solution to the larger crisis in Iraq."

The United States and other Western countries should also open their doors and welcome those refugees who qualify for asylum based on a well-founded fear of persecution in their country on account of their religion. We welcomed those fleeing communism; it is time to welcome those fleeing mindless slaughter.

Christians have been in the Middle East for two millennia. They have suffered though centuries of persecution and discrimination. If they want to stay, we should support them, but they should not have to shed their blood simply to keep token Christian presence in Middle East.

It is not my place to tell Middle East Christians to lock up the holy places and leave, but it is clear that Christians are not welcome in too many places in the Middle East. In some places, Muslim neighbors have come to the aid of Christians, but in too many places, they are silent out of fear themselves. Is it time for Christians to shake the dust off their sandals and leave? That is not for me to say, but if they want to leave, we should certainly help them.

This crisis also presents an opportunity for the Christians of the Middle East to come together and speak with a united voice. Pope Francis and Patriarch Bartholomew I of Constantinople could help make this happen by joining with others in calling an ecumenical synod of Christian leaders from the Middle East. A Middle Eastern ecumenical synod would be an extraordinary sign of unity and an opportunity for these Christians to have their voices heard around the world.

[Jesuit Fr. Thomas Reese is a senior analyst for NCR and author of Inside the Vatican: The Politics and Organization of the Catholic Church. His email address is treesesj@ncronline.org. Follow him on Twitter: @ThomasReeseSJ. Although a member of the the U.S. Commission on International Religious Freedom, Father Reese's writings for the NCR do not necessarily reflect the views of the commission.]