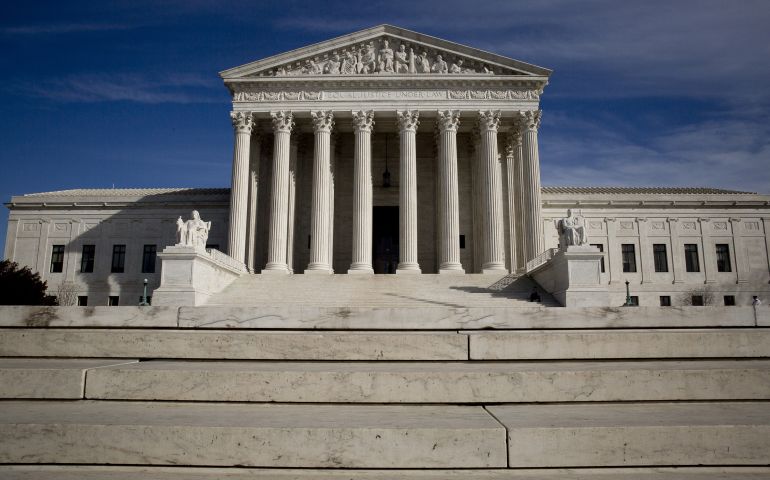 Both before and after his election as president, Donald Trump promised to get rid of the Johnson Amendment, which forbids tax-exempt organizations, including churches, from endorsing or opposing political candidates. At the National Prayer Breakfast on Feb. 2, he promised to "totally destroy the Johnson Amendment and allow our representatives of faith to speak freely and without fear of retribution."

What is the Johnson Amendment and what's all the fuss?

While endorsing, opposing, and campaigning for candidates is strictly forbidden, churches and other charities can be involved in voter registration drives and voter education programs aimed at informing voters of candidates' positions. These have to be done in a nonpartisan and fair way.

The USCCB general counsel gives detailed guidelines on political activity and lobbying for Catholic organizations showing what they can and cannot do under the law.

The way the opponents of the Johnson Amendment talk, you would think that the IRS has agents in every church in the nation, monitoring sermons, ready to pounce if a preacher says anything remotely political. In reality, the IRS is so underfunded that the last thing it wants to do is waste agents on watching churches. Nor does the IRS want the political flak it would get if it went after a church.

Actual investigations by the IRS are extremely rare and are instigated by complaints from congregants or outsiders rather than diligent IRS agents. Political activity in homogenous churches (for example, black churches or white evangelical churches) is rarely reported.

In 2004, the emeritus rector of All Saints Episcopal Church in Pasadena, Calif., preached about the views of George W. Bush and John Kerry on the Vietnam War and said that Jesus would challenge the president's position. Complaints to the IRS resulted in an investigation for which the IRS was roundly criticized. Three years later, the IRS found that the sermon had violated the ban on political intervention without explaining how or why. However, the IRS did not impose any penalty, let alone revoke the tax-exempt status of the church.

This was certainly a strange conclusion to a strange investigation because there is nothing wrong with preachers talking about political issues from a religious and ethical perspective as long as they don't endorse candidates or use church funds to support a candidate. But such an investigation is the exception rather than the rule, despite the apocalyptic rhetoric of the amendment's opponents.

How many churches since 1954 have lost their tax-exempt status for political activity? *One that I could find--Branch Ministries, aka Church at Pierce Creek in Vestal, N.Y.

The church took out a series of ads in newspapers during the 1992 presidential election. According to court documents:

The advertisement proclaimed “Christian Beware. Do not put the economy ahead of the Ten Commandments.” It asserted that Governor Clinton supported abortion on demand, homosexuality and the distribution of condoms to teenagers in public schools. The advertisement cited various Biblical passages and stated that “Bill Clinton is promoting policies that are in rebellion to God’s laws.” It concluded with the question: “How then can we vote for Bill Clinton?”

It was especially the notice at the bottom of the advertisement that caught the IRS's attention: “This advertisement was co-sponsored by The Church at Pierce Creek, Daniel J. Little, Senior Pastor, and by churches and concerned Christians nationwide. Tax-deductible donations for this advertisement gladly accepted."

The IRS revoked the church's tax exemption, and when the church challenged the IRS in Federal district court, it lost. The district court decision was upheld on appeal. The courts did not accept the argument of the plaintiffs that their constitutional rights to free exercise of religion and political expression were being violated:

Plaintiffs were offered a choice: they could engage in partisan political activity and forfeit their Section 501(c)(3) status or they could refrain from partisan political activity and retain their Section 501(c)(3) status. That choice is unconnected to plaintiffs’ ability to freely exercise their religion. Plaintiffs therefore have not demonstrated that the IRS substantially burdened their free exercise of religion.

Churches are not the only ones to challenge the rule as unconstitutional. In the late 1970s, Tax Analysts and Advocates, a public interest tax-exempt law firm, sued the IRS asserting that the restriction was an unconstitutional violation of freedom of speech. (I worked for TAA at the time.)

The argument in brief is that the government cannot force you to give up a constitutional right (free speech) in order to gain a benefit (tax exemption). The courts ruled that Tax Analysts did not have standing to sue. If it wanted to sue, it had to violate the law, lose its tax exemption, and then sue to get it back. Since losing its tax exemption would mean the death of the organization.

**"We brought a subsequent case (Taxation with Representation of Washington v. U.S.) in which we got standing to carry the case to the Supreme Court," explains Thomas Field.  "We won the case 9-2 in the D.C. Court of Appeals, but lost it in the Supreme Court, which held that any violation of speech rights by the Johnson Amendment was mitigated by the ability of charities to organize (c)(4) social welfare organizations as companion organizations which could speak out on political issues with nondeductible funds."

This is the final reason that the IRS is reluctant to vigorously enforce the law, especially against churches. IRS's lawyers know that, despite the Branch Ministries case, if a case ends up in the Supreme Court, the outcome is not certain.

Beginning in 2008, some preachers have been trying to force the IRS's hand by holding "Pulpit Freedom Sunday" days when they purposefully and publicly violate the rule. They hope to trigger an IRS investigation and a subsequent court case to test the constitutionality of the prohibition. Catholic priests were told by their bishops not to participate in Pulpit Freedom Sunday. So far, the IRS has not taken the bait; it has not gone after any of the preachers.

To date, we have heard nothing from the Catholic bishops on the Johnson Amendment. My guess is that the bishops will stay neutral in the fight. Although bishops feel strongly about certain political issues, for the most part they realize that the church would be severely compromised if it started endorsing political candidates.

For Catholics, eliminating the Johnson Amendment would not mean the Catholic church would suddenly be thrust into electoral politics. In Forming Consciences for Faithful Citizenship, the bishops said, "we bishops do not intend to tell Catholics for whom or against whom to vote. Our purpose is to help Catholics form their consciences in accordance with God's truth." Priests telling laypeople how to vote is frowned upon by both the bishops and the pope.

Repeal of the Johnson Amendment could prove very divisive for the Catholic church if bishops and priests decided to endorse candidates. Catholics are almost evenly split between Republicans and Democrats. Political endorsements could irreparably divide the church. Two-thirds of Americans (and Catholics) oppose churches choosing sides in elections, according to the Pew Research Center, although they are split on whether churches should speak out on social and political topics. Only 28 percent of Catholics think the church should endorse candidates, while 45 percent say the church should express views on political and social issues.

There is a final reason that churches and charities should not support repeal of the Johnson Amendment -- money. People might cut back on financial contributions if they opposed the endorsed candidate and felt their donations were going support that candidate.

Repealing the Johnson Amendment will not be a pure blessing for churches. There could be many unintended consequences that would be harmful to churches. Churches would be smart to oppose repeal. Trump and the Republican Congress are not doing churches any favor if they fulfill this promise. They may satisfy a few political pastors but they will cause problems for other churches.

*[An earlier version of this column incorrectly said that no church had lost its tax exemption for violating the Johnson Amendment.]

Trump's religious liberty order slammed as 'pretty much nothing'