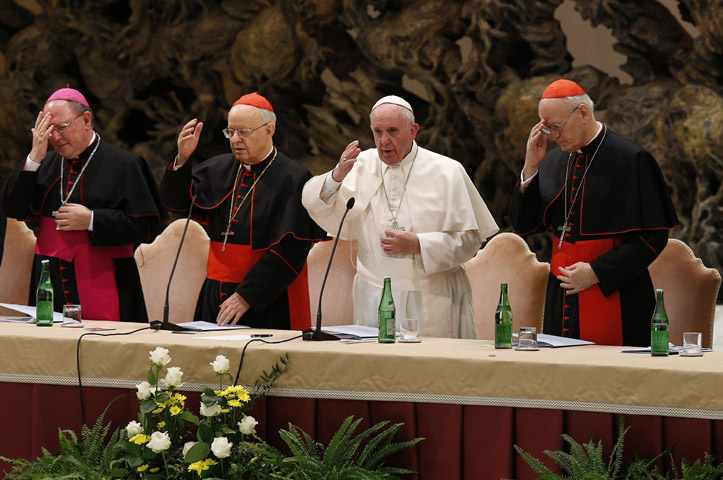 Pope Francis delivers his blessing during an event marking the 50th anniversary of the Synod of Bishops in Paul VI hall at the Vatican Oct. 17. The pope outlined his vision for how the entire church must be "synodal" with everyone listening to each other, learning from each other and taking responsibility for proclaiming the Gospel. (CNS/Paul Haring)

With time running out, the synodal fathers appear no closer to resolving their conflicts over issues facing the family than they were a year ago. One of the principal sticking points is over Communion for divorced and remarried Catholics who do not have an annulment. Another controversy is over the language to be used in speaking about homosexuals.

The Synod of Bishops concludes this Sunday after meeting in Rome since Oct. 4. The synod has been discussing issues facing families, the same issues discussed at a similar gathering of bishops last October.

The pope and the bishops argue that the synod is about the family and decry the media’s focus on homosexuality and divorce, but there is no question that these are the topics around which the bishops have conflict. There is little disagreement over other issues.

One group of bishops, led by Cardinal Walter Kasper, would like to see a pastoral solution that would allow a penitential process leading to Communion for such Catholics, but this is opposed by others, perhaps a majority, who feel that this would violate church doctrine.

Many bishops hoped that they could find a pastoral solution that would not involve a change in doctrine, but conservative bishops are not buying this approach.

The problem is that conservatives do not see divorce and remarriage as simply one sin, which can be confessed and forgiven. They see it as a continuing sin each time the couple has sex. Since they will not stop having sex, they cannot go to Communion. There is no willingness to accept the first marriage as irrevocably broken and destroyed, which would allow the parties to move on with their lives.

Some have portrayed this as a conflict between truth and mercy. Should the church emphasize the teaching or the mercy of Jesus?

For a short time, there was hope for a solution when word got out that the German-speaking small group had reached a consensus. This group contained a wide spectrum of theological heavyweights of opposing views, including Cardinal Kasper and Cardinal Ludwig Müller, prefect of the Congregation for Doctrine of the Faith. But the consensus was on such an abstract level that it was pastorally irrelevant. The Germans had agreed that mercy, truth, and justice were not in conflict because they coexist in God.

[Update, 10/21/15: The German language small group has reached unanimity on a process toward reconciliation and Communion using the "internal forum" for divorced and remarried Catholics.]

The bishops appear oblivious to the fact that, at least in the West, the success of the synod will be judged by whether there is an opening to Communion for divorced and remarried Catholics. With around 40 percent of Catholic marriages in the United States ending in divorce, every family has someone touched by divorce. Remarriage for many of these people results in new relationships and responsibilities that are seen as very positive.

One bishop spoke of a child who at his First Communion gave part of his host to his mother and father who were not allowed to go to Communion. Does this child understand something that the bishops do not?

Kasper does not have the votes in the synod for his solution. At this point, a victory for the progressives would be a synodal call for continued study of the possibility of finding a pastoral solution without changing church doctrine. Simply leaving the issue open for further discussion would be a success.

Meanwhile, bishops are talking about pastoral outreach to divorced and remarried Catholics that does not include Communion. They are using words like “accompany,” “listen,” and “welcome.” This has been caricatured as “You are welcome to come into our house, but you can’t eat dinner with us.”

And how do you “accompany” people you believe are in such serious sin that they cannot go to Communion? What does “listen” mean if you have already decided that you will not change your mind no matter what you hear?

In any case, this is better than referring to such couples as “living in sin.” Perhaps the progressives believe that bishops will be changed by such ministry, while conservatives hope to give couples absolution on their death beds.

Whether this pastoral outreach without Communion will sell back home remains to be seen. I doubt it.

The more likely result will be that certain parishes and dioceses will become known as places where divorced and remarried Catholics are unofficially welcomed at Communion -- don’t ask, don’t tell. Pastoral practice will change, and theology and the bishops will catch up eventually.

Meanwhile, other parishes and dioceses will publicly bar such Catholics. Divorced Catholics who cannot find a welcoming parish may well find a Protestant church where they are welcomed.

In the West, there is also some support for modifying the church’s approach to homosexuals.

Let’s be clear: No bishop is talking about blessing gay marriages. Nor are any bishops talking about the positive aspects of these relationships as they did at the last synod.

But some bishops would like the church to stop using terms like “intrinsically disordered,” which is heard as demeaning by gays. Even language such as “hate the sin, love the sinner” is seen by some bishops as not helpful since sexuality is experienced as intrinsic to a person’s identity.

On the other hand, some bishops are obsessive in their opposition to homosexuality. Some still see it as a lifestyle choice. Dr. Anca-Maria Cernea, a lay auditor and head of the Association of Catholic Doctors in Romania, gave an impassioned speech at the synod linking homosexuality and Marxism while arguing that homosexuals can be cured.

One wonders what would have happened if one of the U.S. bishops had offered their 1997 pastoral message to parents of homosexual children, Always Our Children, as a model for the synod. This 18-year-old document is light years ahead of where many of the synod fathers are today. The American bishops pretty much ignore it also, wishing it had not be approved but afraid to disown it.

Most of the synodal bishops realize that their teaching is not convincing. To those who see themselves as countercultural prophets, this is irrelevant. “We are right, the rest of the world is wrong.”

For those who still have pastoral concerns, there is hope that the church’s teaching can somehow be repackaged in new language so that it is more convincing. But a new language could also mean a new theology that could lead to new approaches to old problems.

The bishops are currently trapped in the old theology they learned in the seminary. They are afraid of new ideas and are not consulting with theological experts who could show them other options. As a result, it is unlikely that new pastoral approaches will be coming forth from this synod.

Some progressives still hope that Pope Francis can somehow magically pull victory from the jaws of defeat. I don’t think so. Pope Francis is conflicted. His pastoral instincts are leading him in one direction, but his respect for collegiality is stopping him from getting too far out in front of the bishops.

Never in my lifetime have I heard of bishops and cardinals being so disrespectful of a pope, challenging his organization of this synod, even a few referring to him as a Protestant and threatening a fractured church if he goes against their wishes.

The pope may have the support of the people, but could he win a vote of confidence from this synod?