Three steps to reform the Vatican 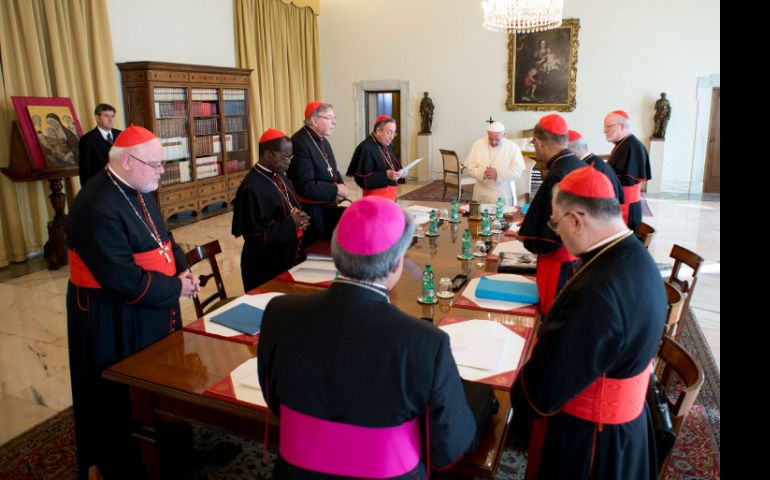 Pope Francis prays during a meeting with cardinals at the Vatican Oct. 1, 2013. (CNS/Reuters/L'Osservatore Romano)

Pope Francis has placed reform of the Vatican as a top priority of his papacy. Whether or not he will succeed remains to be seen.

There are at least three things necessary to successfully reform an institution: changing its culture, appointing key people who support the reform, and putting in place structures, policies, and procedures to concretize the reform.

Changing the culture of an institution is probably the most difficult and the most important. It is not enough to send out memos mandating new policies or to move boxes around in the organizational chart. The attitudes and values of the people in an institution make it what it is, especially if those values are not just talked about but incarnated at the top.

From his first minutes in office, Pope Francis has been trying to change the culture of the institutional church. He has talked about leadership as being for service rather than for status, power, or prestige. He has been critical of clericalism and careerism. He realizes that reform requires a conversion of hearts and minds. And he has not just talked, he has walked the walk. He has modeled what it means to be a good bishop, a good priest, a good Christian.

Pope Francis has moved rapidly in appointing new people in financial offices. He fired all but one cardinal on the board supervising the Vatican bank and replaced them with new people. He also appointed a new director to the bank. He brought in outside professionals to audit the bank and other financial offices. Most recently, he appointed Cardinal George Pell of Sydney to head the new Secretariat of the Economy in the Vatican. Pell's authoritarian style, which brushed many Australians the wrong way, may be exactly what is needed for reforming Vatican finances.

In the Roman Curia, Francis replaced conservative ideologues on the Congregation for Bishops with people sharing his pastoral vision. He also appointed a respected Franciscan, José Rodríguez Carballo, as secretary to the Congregation for Religious to replace Archbishop Joseph Tobin who had been chased out of Rome for being too sympathetic to religious women. He is expected to appoint a new prefect to the Congregation for Divine Worship sometime this year. But personnel changes tend to be slow in the Vatican. It took Pope John Paul II seven years before all of the dicastery heads were replaced with his people.

Francis did, however, disappoint academics by not replacing Cardinal Gerhard Müller as prefect of the Congregation for the Doctrine of the Faith. Müller wants the congregation to continue its role as the watchdog of orthodoxy by investigating and rebuking theologians whom it feels have gone astray. On the other hand, CDF appears to have been somewhat defanged since other cardinals now feel free to disagree with its prefect in public. Even the pope has been quoted as telling religious not to worry about it.

Finally, structural changes are also required for reform. The creation of the Secretariat for the Economy, with authority to audit and regulate other Vatican offices, is the most significant structural change so far. If it is properly staffed and supported, it could have a significant impact.

Reorganizing the Roman Curia, the offices that help the pope in governing the church, is proving more difficult. The eight-member Council of Cardinals has been examining these offices and their functions one by one. There are some questions that should be raised when looking at what a dicastery or office of the Roman Curia does.

First, should this issue be dealt with in Rome or in the local church?

For example, the laicization of priests who want to get married is a complicated and demeaning process that must be decided in Rome. John Paul did not want the process to be easy. On the other hand, in his book, Of Heaven and Earth, Jorge Bergoglio said that if a priest could not observe celibacy, then he should leave, for it is better to have a good layman than a bad priest. He even wrote that if a priest had a child he was required to leave so that he could fulfill his parental obligations to the child.

Following these criteria, there is no reason that a local bishop could not laicize a priest who requests it because he can no longer observe celibacy or has fathered a child. Appeals to Rome would only occur if the priest and his bishop disagreed.

But if the issue should go to Rome, the question arises, to which office?

The Roman Curia was formed by history not by any management theory.

Add in the human dimension and reform becomes even more complicated. You might want to move a function from one office to another and then discover that no one in the new office has the needed expertise but the staff handling the item in the original office is also dealing with subjects that will not be moved. Under these circumstances, it is not easy to simply move staff from one office to another.

Perhaps the first step should be deciding what the curia should not be doing -- what can be left to the responsibility of dioceses and bishops' conferences. It will be easier to reorganize the curia if it is first slimmed down.

But curial reform also needs a vision: the desire to increase collegiality and subsidiary in the church and the desire to change the curia from a papal court to something like a civil service. This would mean replacing curial members of congregations and councils with diocesan bishops. It would also mean that curial officials should not be bishops or cardinals.

Changing the culture of the Vatican, appointing people who support reform, and changing structures are all essential to reforming the institutional church. It is not an impossible task, nor is it easy.

When giants advised the Vatican