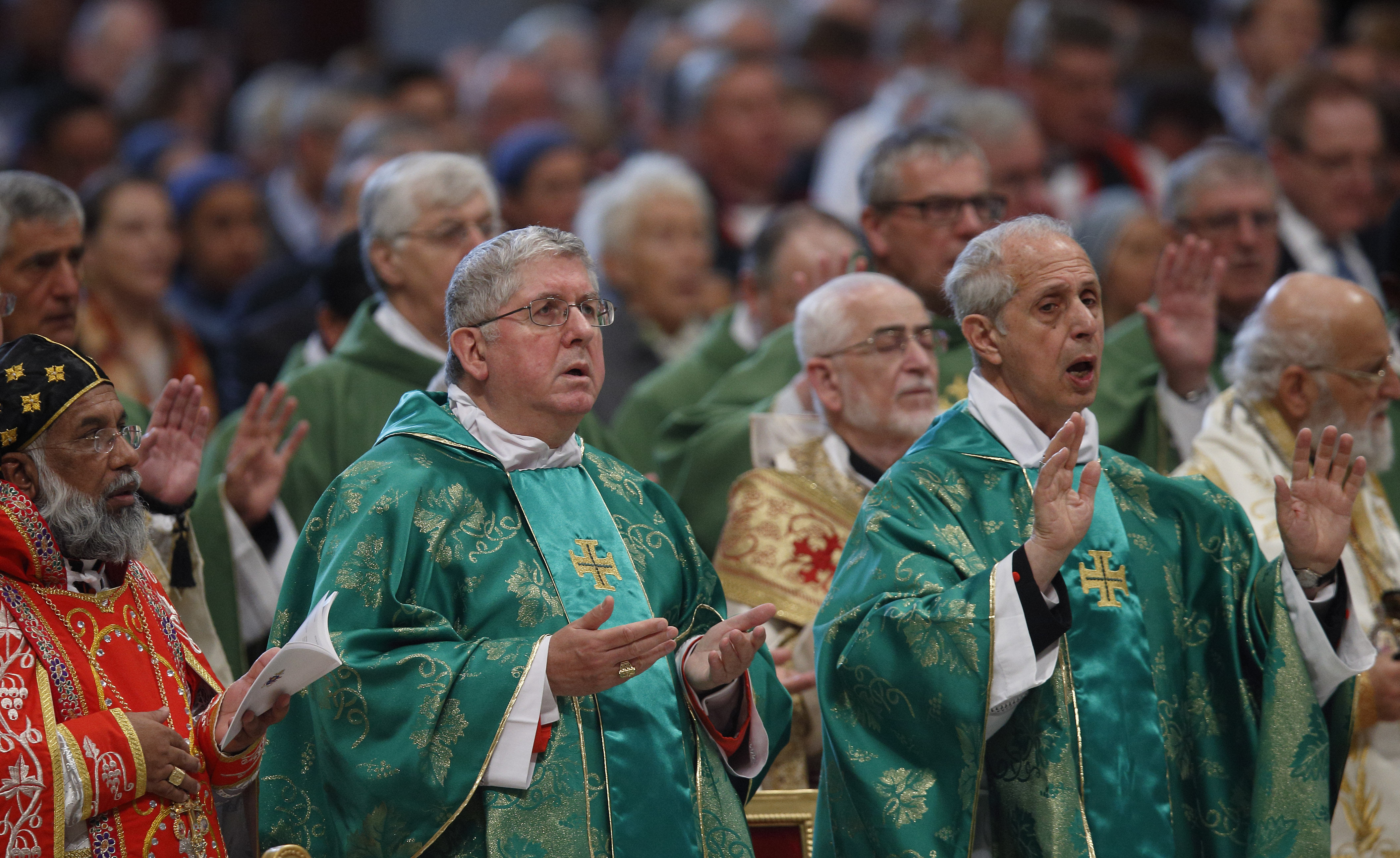 Cardinals Baselios Cleemis Thottunkal of Trivandrum, India, major archbishop of the Syro-Malankara Catholic Church, Thomas Collins of Toronto and Mario Poli of Buenos Aires, Argentina, attend the closing Mass of the Synod of Bishops on the family celebrated by Pope Francis in St. Peter's Basilica at the Vatican Oct. 25. (CNS/Paul Haring)

Although the Oct. 4-24 synod on the family was the best-run Synod of Bishops since its institution by Pope Paul VI after the Second Vatican Council, there are still ways that the synod process could be improved.

The most important improvement instituted by Pope Francis was open and free debate.

Earlier synods were often an embarrassment. The synod was instituted as an advisory body to the pope, but scores of bishops would get up to quote the pope to himself, as if he did not know what he had said. The synod became an opportunity to prove one's loyalty to the Vatican rather than advise the pope.

A number of synod delegates reported that at synods in the past, curial cardinals would go around telling the bishops what topics could not be discussed. The entire process was carefully stage-managed by Vatican officials, and bishops who ignored the playbook, like San Francisco Archbishop John R. Quinn in 1980, got slapped down.

On the other hand, Francis at the beginning of last year's synod encouraged discussion and even told the bishops to speak boldly and feel free to disagree with him.

This is what made conservative conspiracy theories about the synod on the family so laughable. They claimed that the synod was being manipulated and the conclusions were already determined.

In other words, they were accusing the progressives of doing exactly what the conservatives had done at every synod up to the papacy of Francis. In reality, it was sour grapes. The conservatives were really complaining because they were no longer in control.

Francis returned the church to the open atmosphere and process that was in place during the Second Vatican Council but was closed down because of papal fears of chaos and disunity.

What additional changes still need to be done?

First, the makeup of the synod needs to be changed.

While many people want to see laypeople, especially women, as voting delegates, I am not convinced this will bring the desired results.

The problem is "Which laypeople?" Many of the lay auditors at past synods have been church employees chosen by the bishops or Vatican officials. In no way are they representative of normal Catholics.

This was embarrassingly evident at the 1980 synod on the family, where lay auditor after lay auditor sang the praises of natural family planning. Every poll indicates that most Catholics practice birth control using artificial means, but you would have never known it from the lay voices at that synod.

At this last synod, a lay auditor raised questions about Humanae Vitae. She was ignored, but at earlier synods, she would have been sent home in disgrace.

So until someone figures out a way of getting laypeople who are actually representative of the laity, I don't see adding lay delegates as a game changer. It is too easy to get token laypeople who parrot what the bishops think.

What would make a difference is eliminating curial officials as ex officio members of the synod. There is no reason to give them a voice in the synod, except as advisers. They can give advice to the pope every day of the year. They do not have to be present in the synod.

Elsewhere, I have recommended that curial officials not be made bishops or cardinals in order to make it clear that they are staff to the pope as head of the college of bishops, not part of the college of bishops. Getting them out of the synod would be a step in the right direction. They could still attend the meetings if their expertise was needed, but it would be clear that they are there as staff, not decision-makers.

To those who think I am stacking the deck in favor of the progressives, that is not true. If Francis lasts long enough to replace all the curial officials, then progressives would want those votes in the synod. My stance is based on the belief that the Vatican should stop acting like a royal court and become an ecclesial civil service or bureaucracy.

Students of legislatures and boards have found that they do not operate well unless they have committees that continue to work between meetings. The synod has one committee, called a council, that is responsible for concluding the work of the synod and preparing for the next.

But what the synod really needs are substantive committees. For example, it was clear after the 2014 synod that there were controversial topics that needed work: Communion for divorced and remarried Catholics; treatment of gays; the role of women in the family and in the church; polygamy; the African practice of marriage in stages; and other topics.

Each of these difficult topics should have been examined by an ad hoc committee with a diverse membership, which should have reported back to the second session of the synod.

One of the most shocking aspects of the synod on the family was how little research or consensus-building was done between sessions. As a result, the synodal fathers were pretty much at the same place at the end of the second session as they were at the end of the first.

Eventually, the synod might establish standing committees on liturgy, doctrine, clergy, religious, etc., which could replace the congregations that now oversee Vatican offices. Under this model, the synod might meet once a year for a week, similar to meetings of national conferences of bishops.

The third thing the synod needs is an infusion of theological expertise.

Some tried to avoid the fight by saying the teaching will not change, just the pastoral practice. But that did not wash with those who knew that pastoral practice must be based on good theology.

The reason the Second Vatican Council succeeded was because of an alliance between the council fathers and the periti, or experts, at the synod.

Few bishops arrived in Rome for the first session of the council filled with new ideas. When the Roman Curia tried to force its prepared texts on the councils, the members revolted and turned to the theologians. The result was that the first two sessions became a continuing education program for bishops who had not opened a book since their seminary days. The rest is history.

How desperately the bishops at the synod needed theological guidance was evident by their interest in the discussions of the German-language group, which contained some of the most theologically sophisticated cardinals. When these cardinals agreed, most of the bishops followed.

Theologians would have been a great help to the synod committees I suggested above. They could also have presented papers to the synod giving:

All of these studies would have shed light on the controversies that embroiled the synod.

Another approach could be to return to the practice of the Council of Trent where theologians debated issues in front of the council fathers, who would then decide matters. The synod could do the same.

However it is done, there is need for theological experts to advise the bishops who are not scholars but pastors.

The Synod of Bishops was a success because it fostered open and free debate, which is needed in the rest of the church. Synodality is not just for the synod, but for the whole church, according to Francis. We must learn to speak boldly and to listen humbly.

But to build on the successful changes of Francis, the synod membership needs to be changed, committees need to be formed, and theologians need to be invited to the party.