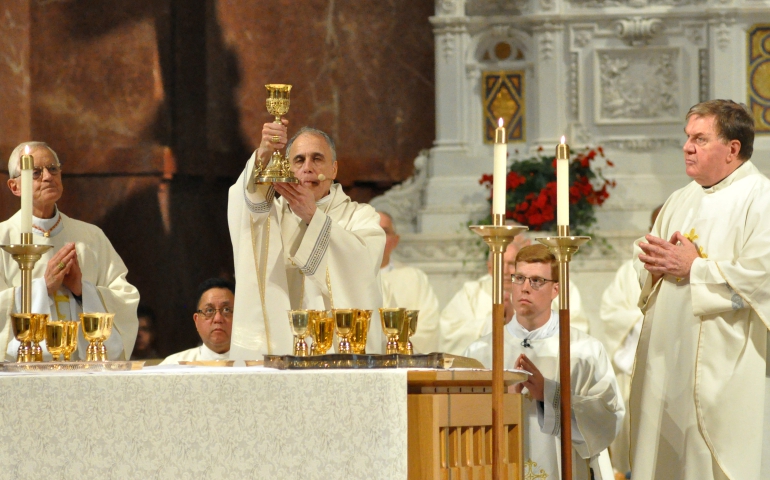 The meetings of the U.S. Conference of Catholic Bishops have been tedious and boring in recent years and I saw no reason to think that things would be any better this spring. In fact, at their meeting the bishops discussed some very important issues affecting the church and American society. How much progress they made is another issue.

One important topic that the bishops discussed is the October 2018 Synod of Bishops on youth and vocations. The prospect of a large group of celibate old men talking about young people is not enthralling, but with Pope Francis this synod might be different.

The U.S. bishops would have to be blind not to recognize that the church has a problem with young people. According to Pew Research Center, one out of three people raised Catholic have left the church. Almost half of those left before reaching 18. These are not people who are Catholics but don’t go to church; these are people who say that they are no longer Catholic. This is a devastating exodus unprecedented in the life of the Catholic Church in America.

"The synod indeed comes at a critical time," Cardinal Joseph Tobin of Newark, New Jersey, told the bishops in his opening remarks. "We know that there are both challenges and opportunities here in the U.S. The increased amount of disconnected millennials is certainly a concern for us, as is the decline and the delay of marriage among young people.”

Despite the exodus, Tobin see hopeful signs, including "the high interest among millennials during the liturgical seasons of Advent and Lent" and "the continued importance in our ministries and outreach to young people which have a positive effect on vocational discernment."

While I am less optimistic, Tobin did present a smart strategy for the American bishops. He encouraged them to participate in conversation with young people and emphasized that listening is an essential part of this conversation.

"This is a time to learn from youth and young adults, to listen to their stories and to engage them in authentic dialogue," he said. "We can also remember that youth and young adults are the agents, not the objects, of this process and of this synod. So they must have as much at stake in this as we do.

"Further, we can involve leaders in youth, campus and young adult ministries, vocations, marriage and family life — all who connect with youth and young adults in their work."

This is certainly in line with Francis’ plans for the synod. The Vatican has created an online questionnaire inviting young people from all over the world to participate and give input to the synod. By doing this, the pope is modeling how other bishops should listen to young people prior to the synod.

Archbishop Charles Chaput of Philadelphia explained the questionnaire to the bishops and encourage them to consider two main questions:

“Listening and accompanying” is a pastoral style quite different from patriarchal style of “teaching and directing.” The pastoral style recognizes that these youths are adults who cannot be forced into prefabricated molds. Trust and understanding are essential to a fruitful conversation. The result may be accompanying people on a lifelong pilgrimage, rather than preparing them for an entrance exam.

The theme of listening was also emphasized by Archbishop Christophe Pierre, apostolic nuncio to the U.S. He sees listening as essential to the missionary attitude that Francis is encouraging in the church.

"Do we listen — even to those with whom we disagree — so that we might propose the essentials of the Gospel in a more persuasive, life-changing way?" Pierre asked. "It is important to listen to the laity, who have a particular expertise, real faith and devotion; to the clergy and religious; and to one another as bishops, acting in a collegial and synodal way, to produce the best pastoral response to the challenges of our times."

Besides the synod, the bishops also discussed religious liberty and immigration.

After extensive discussions, the bishops voted 132-53 in favor of transforming their Ad Hoc Committee for Religious Liberty into a permanent committee of the conference.

In the U.S. Senate, that would be considered an overwhelming margin, but conflict is evident any time the bishops' conference has more than 10 votes against the passage of a resolution.

The Ad Hoc Committee for Religious Liberty was created in 2011 and spent much of its energies fighting the Obama administration’s requirement that all health insurance programs include coverage of contraceptive care. With the election of President Donald Trump, it looks like all religious institutions and perhaps all employers who object to such coverage will be able to exclude it.

Despite the Trump election, Archbishop William Lori of Baltimore recommended making the ad hoc committee permanent because he saw more challenges to religious freedom on the horizon. Cardinals Timothy Dolan of New York and Donald Wuerl of Washington agreed.

"The challenge to religious liberty is a growing one," said Wuerl. "The dominant culture increasingly now finds that it's not just a matter of disagreeing with religious principles and positions. But there's a certain level of hostility becoming more and more evident. ... This problem is not going to go away."

As a standing committee, the bishops will elect the chair of the religious liberty committee who can only serve for two years. Lori has been chair of the ad hoc committee since its creation in 2011.

Some of the issues the committee will have to address are the growing pressures on Catholic hospitals and doctors to perform procedures (abortions, sterilization, artificial insemination, in vitro fertilization, sex-change surgery, assisted suicides, etc.) contrary to Catholic teaching. In addition, religious institutions and employers are now dealing with issues like adoptions by gay spouses, benefits for spouses of gay employees, and the treatment of employees who do not practice the teachings of the church. The bishops are especially concerned about efforts to defund Catholic charities, health care, schools, and development projects if they object to certain activities on religious grounds.

Other bishops felt the emphasis on religious liberty overshadowed concerns about justice and peace. This was especially true since a day earlier the bishops had let their working group on immigration go out of existence. The group, established last November, had put forth official statements opposing three executive orders involving immigration and immigrants that the Trump administration had issued in its first week in office. It also advised the bishops on dealing with other immigration issues.

The bad optics of allowing this working group to go out of existence at a time when immigrants are growing more fearful caused the bishops to reverse themselves and allow the immigration group to continue. Bishop Robert McElroy of San Diego argued that the bishops should stay “on a level of heightened alert because our people are on a level of heightened alert because of the fears among them. [The fears] are not imaginary, and they have been stoked by particular actions and words and legislative orders."

The bishops also found major problems in the American Health Care Act passed by the House of Representatives. Bishop Frank Dewane of Venice, Florida, chairman of the U.S. bishops' Committee on Domestic Justice and Human Development, called “on the Senate to strip away harmful promises of the AHCA or start anew with a better bill."

The bishops were also troubled by Trump’s proposed budget cuts, including the $880 billion in cuts to Medicaid, which they said would “destabilize our own Catholic health care apostolates, take food from the mouths of school-aged children and the homebound, and deny already scarce medical resources to the nation's neediest in every state across the land."

Young people, religious freedom, health care, and immigration are all serious issues that deserve serious consideration by the U.S. bishops. But the question remains: Will the talk be followed by action? The bishops have given great emphasis to the religious liberty debates in the United States, but how vocal have they been on the other issues? Some bishops argue that they have spoken out on these other issues but that the media only covers the bishops when they participate in the culture wars. Whatever the case, a better strategy is needed.