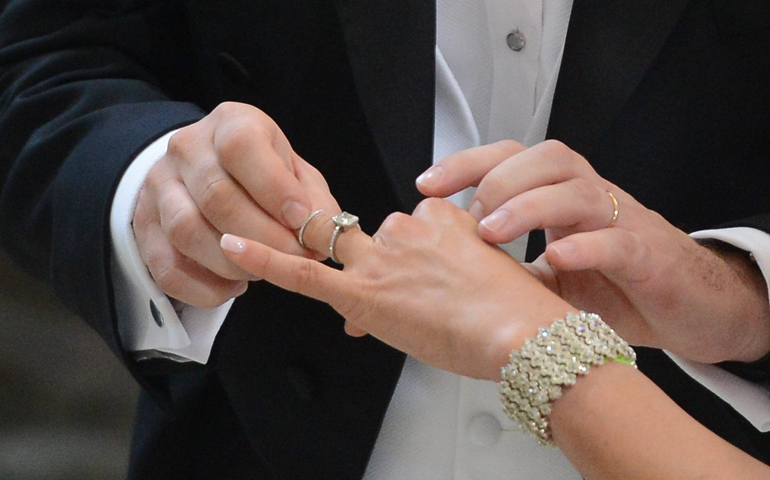 A couple gets married in Stockholm, Sweden, in this 2013 file photo. (CNS/Fredrik Sandberg via EPA)

Much of the negative discussion around the pope's apostolic exhortation Amoris Laetitia has focused on his opening the possibility of divorced and remarried Catholics receiving Communion. His critics are quick to cite the words of Jesus in Matthew 19:

"Therefore, what God has joined together, no human being must separate. ... whoever divorces his wife (unless the marriage is unlawful) and marries another commits adultery."

Earlier in the Sermon on the Mount, Jesus says, "whoever divorces his wife (unless the marriage is unlawful) causes her to commit adultery, and whoever marries a divorced woman commits adultery."

These statements are clear and definitive and end the discussion in the minds of the critics of Pope Francis. "Jesus said it. Case closed." But is it?

I will not attempt here to do a scholarly analysis of the biblical issues involved in divorce and remarriage, but I think it is worth raising some questions about whether these quotes should end the discussion.

There are at least three reasons that these words from Jesus do not prove that Pope Francis is wrong in opening up the possibility of some divorced and remarried Catholics receiving Communion.

First, Jesus said a lot of things that we do not observe literally without exception.

And right after his words about divorce, he says, "Again you have heard that it was said to your ancestors, 'Do not take a false oath, but make good to the Lord all that you vow.' But I say to you, do not swear at all; not by heaven, for it is God's throne; nor by the earth, for it is his footstool; nor by Jerusalem, for it is the city of the great King."

How do we determine which words of Jesus are to be treated as absolutes and which are open to interpretation?

Immediately following Jesus' words on oaths, he says, "Offer no resistance to one who is evil. When someone strikes you on [your] right cheek, turn the other one to him as well. If anyone wants to go to law with you over your tunic, hand him your cloak as well. Should anyone press you into service for one mile, go with him for two miles. Give to the one who asks of you, and do not turn your back on one who wants to borrow."

If Christians believed and practiced this on a literal level, we would all have to be pacifists.

There are lots of other quotes from Matthew that we do not take literally, or at least don't observe rigorously:

"Do not think that I have come to abolish the law or the prophets. I have come not to abolish but to fulfill. Amen, I say to you, until heaven and earth pass away, not the smallest letter or the smallest part of a letter will pass from the law, until all things have taken place. Therefore, whoever breaks one of the least of these commandments and teaches others to do so will be called least in the kingdom of heaven. But whoever obeys and teaches these commandments will be called greatest in the kingdom of heaven."

"No one can serve two masters. He will either hate one and love the other, or be devoted to one and despise the other. You cannot serve God and mammon."

"Whoever causes one of these little ones who believe in me to sin, it would be better for him to have a great millstone hung around his neck and to be drowned in the depths of the sea."

Then Peter approaching asked him, "Lord, if my brother sins against me, how often must I forgive him? As many as seven times?" Jesus answered, "I say to you, not seven times but seventy-seven times."

"Call no one on earth your father; you have but one Father in heaven."

If you observe all of these on a literal level, I will send your name to the Congregation for the Causes of Saints. Since we don't, my question is, why do we insist on enforcing the words of Jesus on divorce literally without any exception, when we find all sorts of wiggle room in many of his other sayings?

Yet, he does list punishment for other sins. In Matthew 25, for example, he says:

Any reading of the text would lead a neutral observer to conclude that Jesus was much more upset by people who ignored the needy than he was by divorced and remarried couples, yet the church has made a much bigger deal over divorce than our care of the poor. Why is that?

Elsewhere in Matthew, Jesus says, "Whoever will not receive you or listen to your words — go outside that house or town and shake the dust from your feet. Amen, I say to you, it will be more tolerable for the land of Sodom and Gomorrah on the day of judgment than for that town."

When Jesus wants to threaten someone with hell fire, he knows how to do it! But even here, do you really take him literally?

The third point I would make is that it is important to ask why Jesus is making a big deal about divorce. Here the historical context is important. Note that Matthew only speaks of men divorcing women. In Matthew 19, he is responding to a question from the Pharisees, "Is it lawful for a man to divorce his wife for any cause whatever?"

Where Jesus lived and taught, divorce was only available to men. [Mark, whose gospel was used in Rome made the teaching of Jesus gender neutral because in Rome upper-class wives could divorce their husbands.]

I look upon Jesus' teaching on divorce as the first feminist legislation because a divorced woman was kicked out on the street with no assets or alimony. Her father would not take her back because she was a failure. No man would marry her. She had no education and few marketable skills. She would have to beg on the streets or prostitute herself.

It was not until the 19th Century that divorced women began to get some protection from the civil law. As a result, divorce was clearly a devastating injustice to women for most of human history. Jesus quite rightly condemned it since practically all divorces were done by powerful men to powerless women.

Today we live in a different world. How can we be so certain that Jesus would respond in the same way to divorce today? True, most divorces involve sin, moral failure and great pain. True, in most divorces women get the short end of the stick. Divorce is not something to be shrugged off, but once it has happened and a marriage is dead, can there be a possibility for healing and life in the future?

Francis thinks so. So do I.