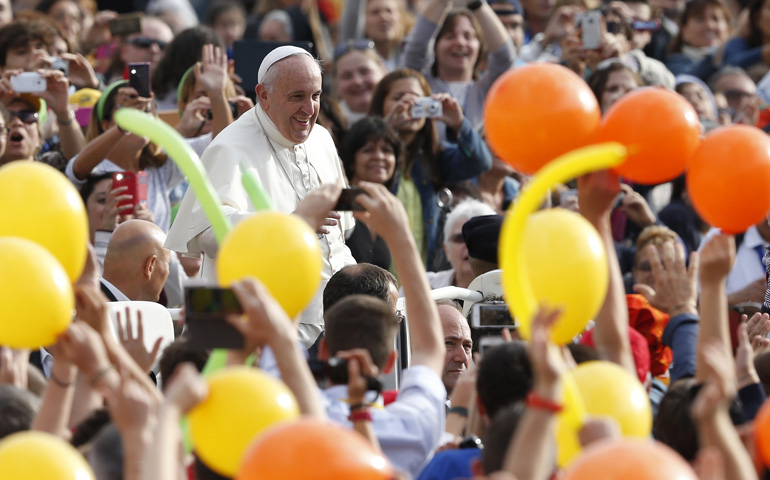 Pope Francis greets the crowd as he arrives to lead his general audience Wednesday in St. Peter's Square at the Vatican. (CNS/Paul Haring)

All wars begin in the human heart -- a heart that is jealous and bitter and tears apart communities through misunderstandings and marginalization, Pope Francis said.

"How wonderful if we would remember more often who we are, what Jesus Christ did with us: We are his body," members of the church filled with the Holy Spirit's gift of new life in Christ and united in fellowship and love, he said at his weekly general audience Wednesday in St. Peter's Square.

The day also marked the feast day of St. John Paul II, who "invited everyone to open the doors to Christ," said Pope Francis, who canonized the Polish pope in April.

As the church celebrated for the first time the memorial of St. John Paul, Pope Francis recalled how he "reminded the whole world of the mystery of divine mercy.

"May his spiritual legacy not be forgotten, but drive us to reflect and act concretely for the good of the church, the family and society," he said in a greeting to pilgrims from Poland.

In his main audience talk, the pope continued his catechesis on the nature of the Catholic church, focusing on the church as body of Christ.

The pope told everyone that their homework for the day was to read Chapter 37 of the Book of Ezekiel and the "Vision of the Dry Bones," which, he said, offers a "striking" yet hope-filled image of God's power to join together and breathe new life into a dead and divided people.

Through baptism, Christians are made to be one with Christ, creating "a masterpiece of the Spirit who instills in everyone a new life in the risen Christ and puts us next to each other, each one to serve and support the other, making all of us be one body edified in communion and love," he said.

This is "the great gift we receive on the day of our baptism," he said, to be joined together, conforming ourselves to Christ and sharing his love with each other "as living members of the same body."

However, it is not always easy for individual Christians and their communities to live in loving, respectful unity, he said.

Parishes, groups, even neighborhoods can be marked by "divisions, jealousies, misunderstandings and marginalization. All these things are not good because instead of edifying and making the church grow as the body of Christ, they shatter it into many pieces, they dismember it," he said.

Jealousy of other people's gifts and good fortune -- "that one bought a new car ... that one won the lottery" -- tears the community apart and damages the one who is filled with envy, he said.

"The jealousy builds up, builds and fills the heart, a jealous heart is acid," as if it were filled not with blood, but vinegar, making the person always be unhappy, he said.

He said St. Paul had a lot of good advice in his letter to the Corinthians, who "were champions" at the time at infighting and division.

The "concrete advice, which is still valid for us, too: Do not be jealous, but appreciate the gifts and qualities of our brothers and sisters in our communities," he said.

People must work against divisions, "be close to each other, share in the suffering of the least and neediest and express our gratitude to everyone," he said.

Not everyone remembers to say, "Thank you," all the time, he said, because "envy holds us back." But "a heart that knows how to say, 'Thank you,' is a good and noble heart, a heart that is happy."

The other thing people must not do is think they are better than others, like the Pharisee who thanks God he is "not like the rest of humanity."

"This is awful. Never do this," the pope said.

When people are tempted to feel they are superior, "remember your sins, the ones no one knows about, feel ashamed before God and say, 'Well, you Lord, you know who is greater; I'll keep my mouth shut.' And this is healthy."

At the end of the audience, the pope offered encouragement to employees of an Italian airline company that announced the layoffs of more than 1,300 workers.

Waving red balloons and wearing red T-shirts that said, "I am redundant," the Meridiana employees were given a special section below the sacristy during the audience.

The pope told them he hoped "a fair solution" would be found that sought to safeguard people's dignity and the needs of so many families.

"Please, I'm making an appeal, let there be no family without a job," he said.