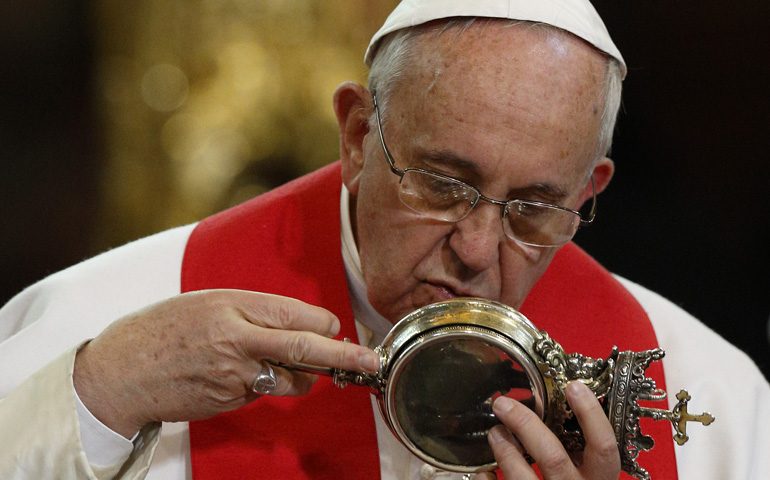 Pope Francis kisses a reliquary containing what is believed to be the blood of St. Januarius during a meeting with religious Saturday at the cathedral in Naples, Italy. (CNS/Paul Haring)

At the end of Pope Francis' spontaneity-filled meeting with priests, seminarians and religious in the cathedral of Naples, the vial of dried blood of the city's patron saint appeared to miraculously liquefy.

After Pope Francis blessed the congregation with the reliquary holding the vial, Cardinal Crescenzio Sepe of Naples announced, "As a sign that St. Januarius loves the pope, who is Neapolitan like us, the blood is already half liquefied."

The thousands of people present in the cathedral applauded, but the pope insisted on taking the microphone. "The bishop said the blood is half liquefied," he said. "It means the saint loves us halfway; we must all convert a bit more, so that he would love us more."

The blood of the fourth-century martyr is Naples' most precious relic. The townspeople gauge the saints' pleasure with them by awaiting the blood's liquefaction three times a year: in the spring during celebrations of the feast of the transfer of the saint's relics to Naples; Sept. 19, his feast day; and Dec. 16, the local feast commemorating the averting of a threatened eruption of Mount Vesuvius through the intervention of the saint.

When Pope Benedict XVI visited in 2007 and the blood did not liquefy, Msgr. Vincenzo de Gregorio, custodian of the relic, told reporters the miracle had never occurred when a pope visited on a day other than the feast day.

Entering the cathedral, Pope Francis' white cassock and his arms were yanked repeatedly by priests, seminarians and nuns wanting to touch him or attract his attention.

Calm reigned briefly after the pope reached the altar, but then Sepe told the pope that, in accordance with canon law, he had given formal permission for the nuns in Naples' seven cloistered convents to go out for the day.

The nuns, who had been seated in the sanctuary, broke free, running to the pope, surrounding him, hugging him, kissing his ring and piling gifts on his lap.

"Sisters, sisters, not now, later!" the cardinal shouted over the microphone to no avail. "Look what I have done," he said, exasperated. "And these are the cloistered ones, imagine what the non-cloistered ones are like! Ay. They're going to eat him alive."