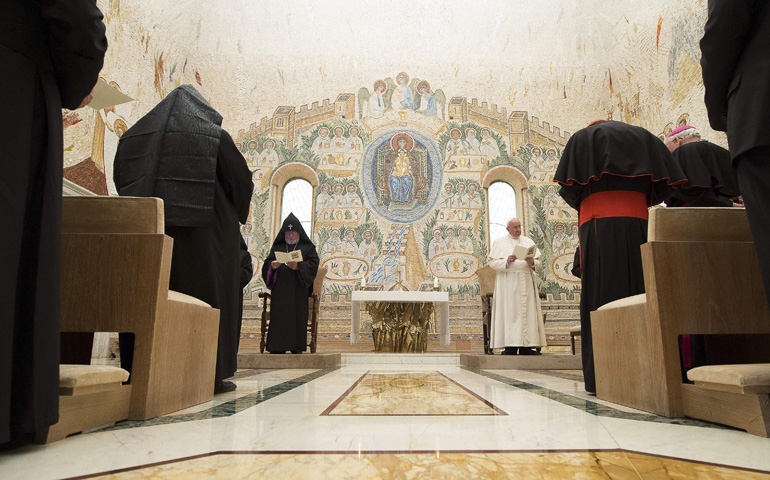 Pope Francis prays with Catholicos Karekin II of Etchmiadzin, patriarch of the Armenian Apostolic Church, during a prayer service Thursday at the Vatican. (CNS/Reuters/L'Osservatore Romano)

To honor the sacrifice of those killed for their faith in the 20th century, Christians today must renew their commitment to reconciliation and full Christian unity, Pope Francis said.

Pope Francis welcomed the catholicos to the Vatican on Thursday, paying homage to the fidelity and sacrifice of Armenian Christians during decades of persecution and oppression. He also praised the Armenian Apostolic Church's commitment to ecumenical dialogue.

"The number of disciples who have shed their blood for Christ in the tragic events of the last century is certainly greater than the number of martyrs in the first centuries" of Christianity, the pope said. "In this martyrology, sons and daughters of the Armenian nation have a place of honor."

Pope Francis did not use the term "genocide," although his remarks were an obvious reference to the estimated 1.5 million Armenians -- more than half the Armenian population at the time -- who died in a forced evacuation by Ottoman Turks in 1915-18.

The suffering of Christians from every church and denomination under the Nazis, the communists and various dictatorships in the 1900s has made "an invaluable contribution to the cause of unity among Christ's disciples," the pope said.

The unity of Christians in "suffering and martyrdom and blood," he said, "is a powerful call to continue walking the path of reconciliation among churches with decisiveness and trusting abandonment to the work of the Spirit."

"We have an obligation to travel this road of brotherhood, including out of a debt of gratitude toward the suffering of so many of our brothers and sisters, a suffering that is salvific because it is united to the passion of Christ," Pope Francis said.

The pope prayed that the Holy Spirit would "enlighten us and guide us to that deeply desired day when we can share at the eucharistic table."

After their formal meeting and remarks in the papal library, Pope Francis and Catholicos Karekin, along with members of his entourage, went to the Redemptoris Mater Chapel in the Apostolic Palace for a brief prayer service.

During the service, a prayer was offered "for our pontiffs -- His Holiness Francis and His Holiness Karekin" and for their ministry. At the end of the service, both leaders offered their solemn blessings to the small congregation.