Don't be bitter or give up; offer the world your wisdom, Pope Francis tells seniors 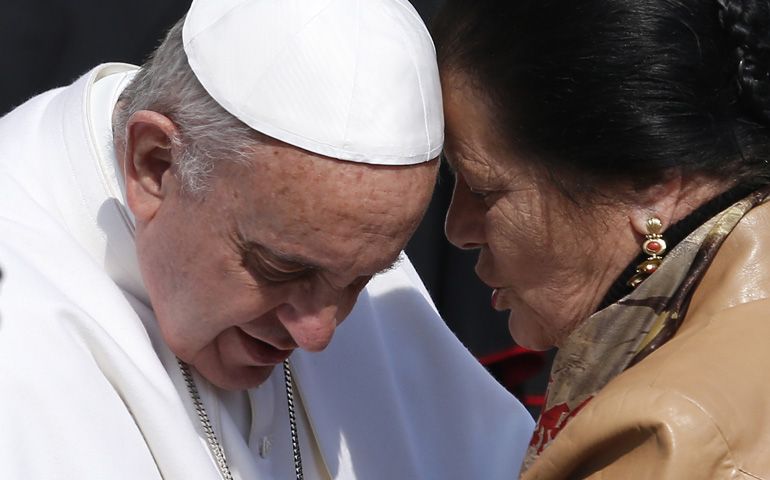 Pope Francis listens to a woman while greeting the disabled during his general audience Wednesday in St. Peter's Square at the Vatican. (CNS/Paul Haring)

Today's frenetic world, especially young people and families, needs the older generation's prayers, wisdom and gifts to give them the encouragement, hope and faith they often lack, he said at his weekly general audience Wednesday.

"We, older people, can remind ambitious young people that a life without love is barren. We can tell fearful young people that worrying about the future can be overcome. We can teach young people who are in love with themselves too much that there is more joy in giving than receiving," he said to those gathered in St. Peter's Square.

The pope continued a series of audience talks about the family with the second part of two talks dedicated to the elderly, looking at the important role they play in modern society and the family.

The 78-year-old pope said he would use the pronouns "we" and "us" when talking about the elderly since "I, too, belong to this age group," recalling with a smile how during his visit to the Philippines in January, the people there called him "Lolo Kiko -- that is, Grandpa Francis."

"It's true that society tends to discard us, but the Lord definitely doesn't. The Lord never rejects us," he said.

In fact, there is a true vocation and mission set aside for older people, who have a lot more free time at their disposal now than before, he said.

"It's still not time to 'rest on one's oars' " and just coast along, he said.

Being older is certainly different, and so when it comes to finding one's new purpose in the world, seniors need to sort of "make it up" as they go along "because our societies are not ready, spiritually and morally, to give this period of life its full worth."

Even "Christian spirituality has been taken a bit by surprise, and it involves sketching out a spirituality of older persons," he said.

There are plenty of saints as role models, he said, especially the elderly Simeon and Anna in the temple, who had the knowledge and wisdom from life's journey to recognize Jesus.

When they saw Jesus, "the weight of age and waiting disappeared at that moment," and they found "new strength for a new task: to give thanks and bear witness to this sign of God," the pope said.

Just as Simeon found inspiration to sing out with joy and Anna became the first to preach of Jesus, "Let us also become poets of prayer, let us acquire a love for looking for our words" to offer, as inspired by the word of God.

The prayers of the world's grandparents and older people are "a great gift for the church" and they offer "a great infusion of wisdom for all of society, too, especially for [those who are] too busy, too occupied, too distracted."

Pope Francis remarked how wonderful it was that Pope Benedict XVI "chose to spend the final stretch of life in prayer and listening to God. This is beautiful," he said to applause.

"It is truly a mission for grandparents, a vocation for older people," he said, for them to hand down their wisdom and offer encouragement to those who are searching for meaning in life.

"How awful the cynicism of an older person is, he who has lost the meaning of his witness, scorns the young and does not communicate knowledge about life."

He said he was praying for "a church that challenges the culture of disposal with the overflowing joy of a new embrace between young and old people."

A grandparent's words are so important, he said, telling his audience how he often reads a letter, which he keeps in his breviary, that his grandmother wrote him for his priestly ordination because "it does me good."

An excerpt of that letter, published in Pope Francis: His Life in His Own Words by Sergio Rubin and Francesca Ambrogetti, reads: "May these, my grandchildren, to whom I gave the best my heart has to offer, lead long and happy lives, but if one day hardship, illness or the loss of a loved one should fill them with grief, may they remember that one sigh directed to the tabernacle ... and a glance toward Mary ... may cause a soothing drop to fall on the deepest and most painful of wounds."

At the end of the audience, the pope received a delegation of pilgrims observing the 500th anniversary of the birth of St. Teresa of Avila, a mystic, co-founder of the Discalced Carmelites and doctor of the church.

Celebrations, which run from her feast day Oct. 15, through the date of her birth, March 28, included a "world tour" of her wooden cane. The delegation showed the pope the relic, which is kept in specially made glass-covered wooden box.

Vatican | Don't be bitter or give up; offer the world your wisdom, Pope Francis tells seniors