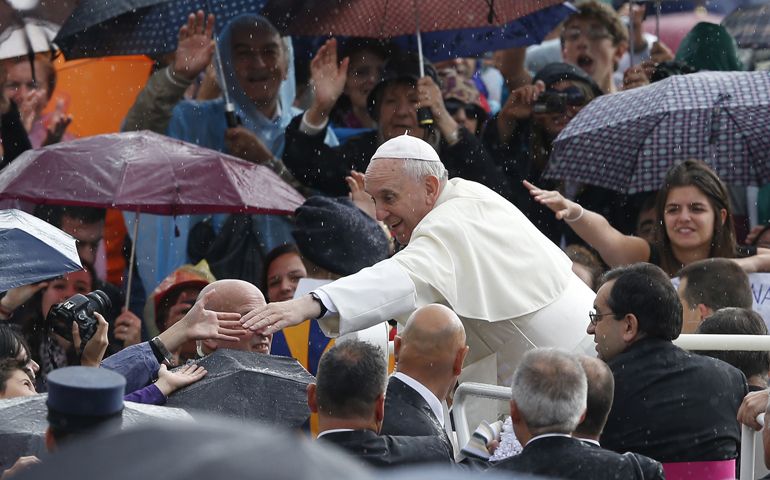 Pope Francis greets people as he arrives to lead his general audience in St. Peter's Square at the Vatican Oct. 9. (CNS/Paul Haring)

In his first address entirely focused on the topic of women, Pope Francis on Saturday said "women are called to service, not servitude."

His remarks came before approximately 150 people gathered at a two-day Vatican event organized by the women's section of the Pontifical Council for the Laity. It marked the 25th anniversary of the apostolic letter Mulieris Dignitatem, written by Pope John Paul II.

The council seminar, according to Vatican Radio, discussed at some length a key point in the apostolic letter that says God entrusts man, the human being, to woman in a special way.

"What does this 'special entrusting' ... of the human being to woman signify?" Francis asked. "It seems evident to me that my predecessor is referring to maternity."

He then added: "Many things can change and have changed in our cultural and social evolution, but the fact remains that it is the woman who conceives, carries in her womb and gives birth to the children of men. And this is not simply a biological matter, but carries a wealth of implications for the woman herself, for her way of being, for her relationships, for the way in which we lend respect to human life and to life in general. Calling a woman to maternity, God entrusted the human being to her in an altogether special manner."

Francis then warned that there are two dangers always present when speaking about the topic of women. He called them "two extreme opposites that destroy woman and her vocation."

"The first," he said, "is to reduce maternity to a social role, to a task, albeit noble, but which in fact sets the woman aside with her potential and does not value her fully in the building of community. This is both in the civil sphere and in the ecclesial sphere."

"The other danger," he said, "[is] in the opposite direction, that of promoting a type of emancipation which, in order to occupy spaces taken away from the masculine, abandons the feminine with the precious traits that characterize it."

Francis returned to a theme he has repeatedly emphasized during his pontificate, the theme of mercy, applying it to women and the way they help in an understanding and teaching mercy.

"I would like to underline how the woman has a particular sensitivity for the 'things of God', above all in helping us to understand the mercy, tenderness and love that God has for us," he said.

John Paul's 1988 apostolic letter, Mulieris Dignitatem, was received critically in some church quarters. The letter, advocating a Christian complementarianism of genders, defended the teaching of an all-male clergy.

He wrote: "In calling only men as his Apostles, Christ acted in a completely free and sovereign manner. In doing so, he exercised the same freedom with which, in all his behavior, he emphasized the dignity and the vocation of women, without conforming to the prevailing customs and to the traditions sanctioned by the legislation of the time."

He then added: "From here, we must restart that work of deepening and of promoting [women], for which I have already hoped many times. Even in the church, it is important to ask oneself: What presence does the woman have?"

The two-day Council for the Laity seminar drew dozens of experts.

Ana Cristina Villa Betancourt, who heads the women's section of the council, said before it began she hoped it could become "a melting pot of ideas." She said, "People are not here to learn but to share," according to Vatican Radio.

Editor's note: We can send you a biweekly email alert with content from The Francis Chronicles. Follow the directions on our email alert signup page.

In World Day of Peace message, Francis urges 'not to become accomplices' to human trafficking