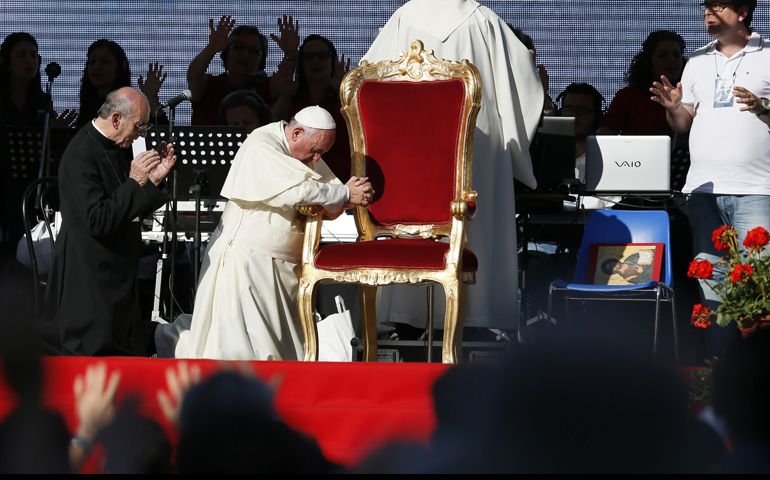 Pope Francis kneels as the crowd prays over him by singing and speaking in tongues during an encounter with more than 50,000 Catholic charismatics at the Olympic Stadium in Rome June 1. During the event the pope acknowledged he had once been uncomfortable with the charismatic movement. (CNS photo/Paul Haring) (June 2, 2014)

Rome — Meeting more than 50,000 Catholic charismatics in Rome's Olympic Stadium, Pope Francis admitted he was not always comfortable with the way they prayed, but he knelt onstage as they prayed for him and over him by singing and speaking in tongues.

"In the early years of the charismatic renewal in Buenos Aires, I did not have much love for charismatics," the pope said June 1. "I said of them: They seem like a samba school."

Little by little, though, he came to see how much good the movement was doing for Catholics and for the church, he told a gathering organized by the International Catholic Charismatic Renewal Services and the Catholic Fraternity of Charismatic Covenant Communities and Fellowships.

Pope Francis invited the crowd, which included charismatics from 55 countries, to come to St. Peter's Square for Pentecost in 2017 to celebrate the 50th anniversary of the movement. The Catholic charismatic movement traces its origins to a retreat held in 1967 with students and staff from Duquesne University in Pittsburgh.

"I expected all of you, charismatics from around the world, to celebrate your great jubilee with the pope at Pentecost 2017 in St. Peter's Square," the pope said.

The celebration in Rome's Olympic Stadium began with the song, "Vive Jesus, El Senor," ("Jesus, the Lord, Lives") a Spanish-language song which Francis -- who claims he is tone deaf -- joined in singing with his hands open like many in the crowd. The pope said he likes the song, which charismatics in Argentina also sing.

"When I celebrated the holy Mass with the charismatic renewal in the Buenos Aires cathedral, after the consecration and after a few seconds of adoration in tongues, we sang this song with such joy and strength," he said.

At another point, when the crowd prayed that the Holy Spirit would fill Francis, he knelt on the bare floor of the stage, while they sang with their hands raised toward him. After the song, many in the crowd kept their hands raised as they prayed in tongues, speaking in unfamiliar languages.

Responding to a married couple, who spoke about the renewal's positive impact on their family life, Francis said the family is the "domestic church," the place where Jesus' presence grows in the love of spouses and in the lives of their children. "This is why the enemy attacks the family so hard; the devil doesn't like it, and tries to destroy it."

"May the Lord bless families and strengthen them during this crisis when the devil wants to destroy them," the pope prayed.

In a speech, Francis told the charismatics that they their movement was begun by the Holy Spirit as "a current of grace in the church and for the church."

He pleaded with charismatic groups not to try to organize everything or create a bureaucracy that attempts to tame the Holy Spirit.

The temptation "to become 'controllers' of the grace of God" is a danger, the pope said. Group leaders, sometimes without even meaning to, become "administrators of grace," deciding who should exercise which gifts of the Holy Spirit. "Don't do this anymore," Francis said. "Be dispensers of God's grace, not controllers. Don't be the Holy Spirit's customs agents."

From the beginning, he said, charismatics were known for their love of and familiarity with the Scriptures; the pope asked those who lost the habit of carrying their Bible with them everywhere to "return to this first love, always have the word of God in your pocket or purse."

Francis also said Catholic charismatics have a special role to play in healing divisions among Christians by exercising "spiritual ecumenism" or praying with members of other Christian churches and communities who share a belief in Jesus as lord and savior.