Skip to main content
This story appears in the Francis in Bosnia and Herzegovina feature series. View the full series. 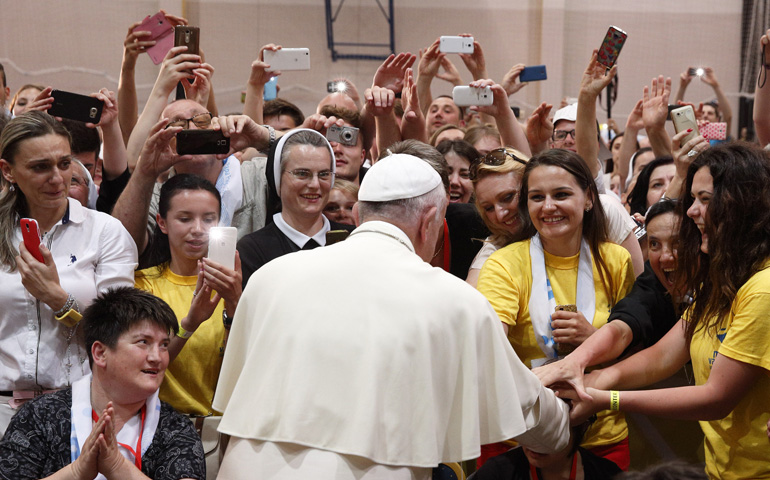 Whether you still stick to books or magazines or get everything online, Pope Francis said all media should encourage and edify -- not enslave.

"Back in my day -- the Stone Age -- when a book was good, you read it; when the book was bad for you, you chucked it," he told hundreds of youth Saturday in Sarajevo.

The pope ended his one-day visit to the capital of this Balkan nation meeting with young people of different religions and ethnicities who volunteer together with the archdiocesan St. John Paul II Center. He set aside his prepared text and told the young people he would rather take some questions.

One young man said he read that the pope had stopped watching TV a long time ago and wanted to know what led him to making that choice.

The pope said he decided back in the middle of 1990 to stop because "one night I felt that this was not doing me good, it was alienating me," and he decided to give it up.

He did not give up on movies, however.

When he was archbishop of Buenos Aires, Argentina, he would go the archdiocesan television station to watch a recorded film he had picked out, which didn't have the same isolating effect on him, he said.

"Obviously, I am from the Stone Age, I'm ancient!"

Times have changed, he said, and "image" has become all important.

But even in this "age of the image," people should follow the same standards that ruled back "in the age of books: Choose the things that are good for me," he said.

Those who produce or distribute content, like television stations, have the responsibility of choosing programs that strengthen values, that help people grow and prepare for life, "that build up society, that move us forward, not drag us down."

Viewers have the responsibility of choosing what's good, and changing the channel where there is "filth" and things that "make me become vulgar."

While the quality of content is a concern, it is also critical to limit the amount of time one is tied to the screen, he said.

Later, in response to a journalist's question on the papal plane from Sarajevo back to Rome, the pope said the online or virtual world is a reality "that we cannot ignore; we have to lead it along a good path" and help humanity progress.

"But when this leads you away from everyday life, family life, social life, and also sports, the arts and we stay glued to the computer, this is a psychological illness," he said.

The pope said some parents do not allow their children to have a computer in their own room, but keep it in a common living space. "These are some little tips that parents find" to deal with the problem of unsuitable content, he said.