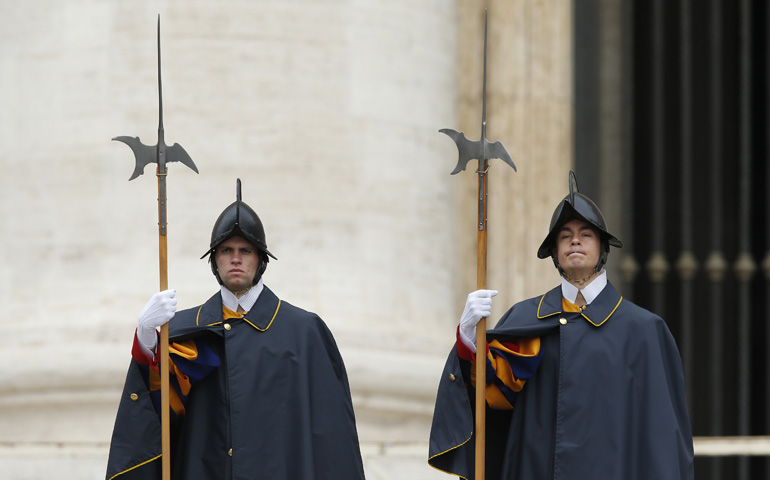 The biggest threat facing the Vatican isn't a bomb or bullet from the outside, but the insidious work of mischief-makers within, who plant discord and resentment, Pope Francis told the Vatican's security force.

"There are bombs in here, very dangerous bombs in here," he told security personnel. "Please, keep your eyes open, because in the darkness of so many wicked lives, the enemy has sown weeds," he said in his homily.

To help celebrate the Vatican security service's patron saint, St. Michael the archangel, the pope celebrated Mass for security personnel Sept. 27 in the chapel of the office governing Vatican City State. The Vatican newspaper, L'Osservatore Romano, published excerpts from the homily Monday, the feast of the archangels Michael, Gabriel and Raphael.

The pope told his own "guardian angels" that their vocation is "to safeguard this state" so the church and the pope "can be free" to carry out their mission.

In addition to the more colorful Swiss Guard, the Vatican's other security body is its own police force, the gendarme corps. The corps of about 130 men is responsible for papal security, crowd control in St. Peter's Square and safety, law and order within the Vatican.

The pope said a good guardian, like the archangel, "has the courage to get rid of demons" and has the intelligence to be able to pick them out from the crowd. "He can't be, excuse my terminology, an idiot; he has to be quick on the uptake and alert."

He said he knows their job is to be like sentinels, keeping watch and guarding entrances, "doors and windows so no bombs get in."

But, "I want to tell you something a bit sad; there are bombs in here" and it doesn't matter if it's "a homemade bomb or an atomic bomb," every single one is "dangerous" and "there are many."

"The worst bomb inside the Vatican is gossip," which "threatens the life of the church and the life of [the Vatican] every day," he said, because it "sows destruction" and "destroys the lives of others."

While there are many religious and laypeople in the Vatican who are "sowing good seed," the devil is still getting his way by using others "to sow weeds."

Even the pope is not immune to this temptation, he said; it's a danger "for me, too," because "the devil gives you that yearning."

So in addition to looking for the usual security threats, the pope told the security guards to also crack down on backstabbing and courageously call people out.

Whatever gripes or problems people have, they should take them directly to the people involved without also complaining to the world, he said.

The sower of weeds meets a bitter end, he said, in "burning furnaces" and condemned to "disgrace and eternal abomination."

But thanks to the security police's added vigilance and help, "the final word written about our lives will be, 'He was a good person. He sowed good seed,' and not, 'He was dreadful, he planted bombs of discord' -- that would be very sad."