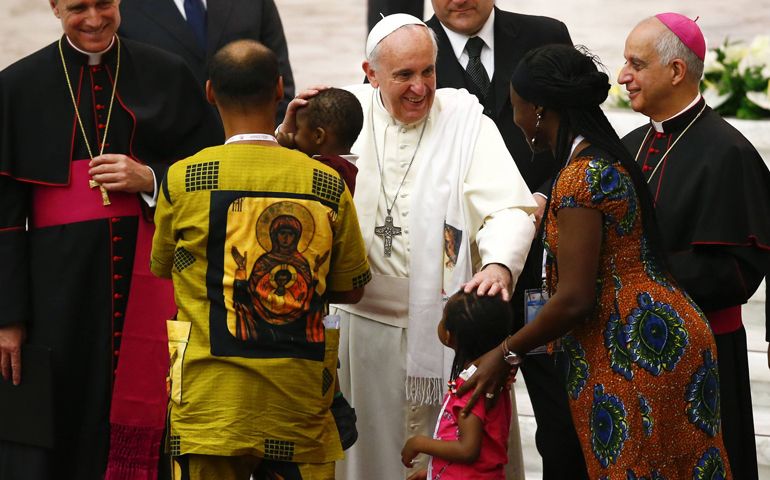 Pope Francis blesses a family Friday during a special audience with participants at a meeting for the new evangelization in Paul VI hall at the Vatican. (CNS/Reuters/Tony Gentile)

Vatican City — Bring the Gospel to those who need it most: the poor, the frazzled and the lost, who wander the world without any guidance or protection, Pope Francis told pastoral workers.

Remember the church's ministry is like working a field hospital, where the attitude is helping the wounded and holding those who are hurt more than guarding laws that only keep people away, he said.

The pope met with more than 2,000 pastoral workers from 60 countries who were at the Vatican attending an international meeting on "The Pastoral Project of 'Evangelii Guadium,' the Joy of Announcing the Gospel." The meeting Sept. 18-20 had participating bishops, religious and laypeople look at ways Pope Francis' apostolic exhortation could guide their work of evangelization.

The pope said the church's main task is evangelizing, especially to those most in need of Christ and his good news.

The pope also said that when Jesus went to towns and villages to teach, his heart broke seeing the crowds because, according to the Gospel of Matthew, "they were troubled and abandoned like sheep without a shepherd."

"How many people in the many existential peripheries of our day are 'troubled and abandoned' and wait for the church, they are waiting for us!

"How much poverty and loneliness unfortunately we see in the world today! How many people live in great suffering and ask the church to be a sign of the Lord's closeness, goodness, solidarity and mercy," he said.

In the hard work of sharing the Gospel, he told them, do not get discouraged, but have "patience and perseverance."

"We don't have a magic wand for everything, but we do have trust in the Lord, who accompanies us and never abandons us,"

The pope said the enormous amount of work and demands being made on pastoral workers "make us run the risk of becoming frightened and withdrawing in on ourselves out of fear and self-defense."

"And out of that springs the temptation of self-sufficiency and clericalism, that codifying the faith into rules and instructions, which the scribes, Pharisees and doctors of the law did during the time of Jesus. We will have everything exact and everything just-so, but the faithful and those who are seeking will continue to be hungry and thirsty for God," he explained.

If pastoral ministry uses the same approach the scribes and Pharisees took, "never, never will we be witnesses of being close" to people like Jesus was, he said.

The pope encouraged church members to go out into the larger community at all times of day and night to see who may be looking to be fellow "workers in the vineyard."

Do not overlook "the weakest and the most disadvantaged," he said, but be generous with them, letting them be useful contributors to the church's ministry.

He also warned people working in pastoral ministry against getting too caught up in "the song of the Sirens," that call them to engage in countless "frenetic series of initiatives" and campaigns that keep them busy, but neglect paying attention to spiritual growth and an encounter with God.

"Let's not forget to do like Jesus did" with his disciples, he said. After a long day proclaiming the Gospel, they would go to a quiet place to be together to pray and reflect.

"Pastoral programs without prayer and contemplation will never touch people's hearts. They will stop at the surface never allowing the seed of the Word of God to take root, sprout, grow and bear fruit," he said.

At the end of the day, it all comes down to offering credible testimony with one's life, he said.

"Words without witness don't work, they don't help," he said.

"Witness is the start of an evangelization that touches the heart and transforms it."

Pope's quotes: God is not indifferent