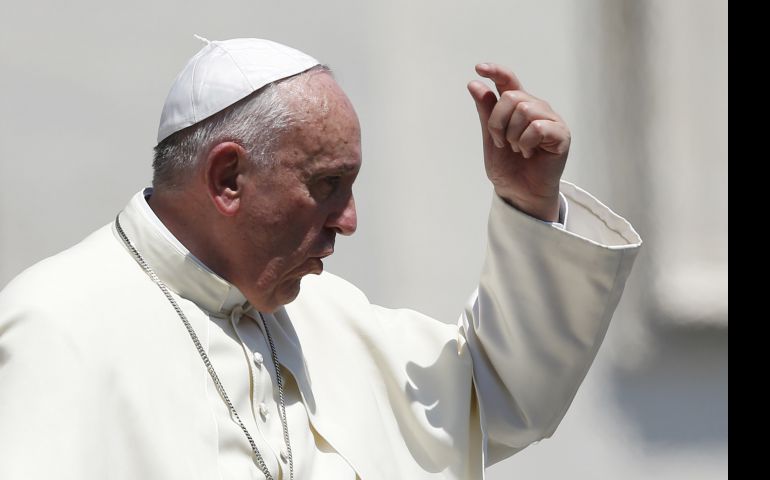 Pope Francis gestures as he leaves his general audience in St. Peter's Square at the Vatican June 10. (CNS/Paul Haring)

Vatican City — The hidden heroes of this world are those family members who still go to work and get the job done after staying up all night tending to a sick loved one, Pope Francis said.

In fact, the family "has always been the closest 'hospital.' And still today in many parts of the world, a (real) hospital is a privilege for a few, and it's often far away," he said at his weekly general audience in St. Peter's Square June 10.

As part of a series of talks about the family and problems they face, the pope looked at illness -- a sign of the human frailty that spans from infancy to old age "when those aches and pains start coming," he said.

Often it is more difficult to see a loved one suffer than to deal with one's own ailments, he said, because "it is love that makes us feel" the suffering and anxiousness of others even more.

In fact, "how many times do we see at work -- we've all seen it -- a man or a woman whose face looks tired, they act tired" and when asked what's wrong, they explain how they got little sleep after tending to a loved one who was ill, he said, straying from his prepared text.

But despite all that, they go on with their day, the pope said.

"These things are heroic. This is the heroism of families; this is the hidden heroism that is done when someone is sick ... and is done with tenderness and courage," he said to applause.

The Gospel is filled with accounts of Jesus encountering and healing the sick, he said.

"He presents himself publicly as someone who fights against illness and who has come to heal humankind from every ill -- illness of the spirit and illness of the body," the pope said.

"It's truly moving," he said, to see how so many people would bring those who were ailing to Jesus.

"If I think about today's big cities, I have to wonder, where are the doors where the sick, hoping to be healed, can be brought?" like the doorway in the Gospel according to Mark where a whole town would gather waiting for Jesus.

"Jesus never denied them care. He never walked by them, he never turned his face away," and he never wasted time, the pope said.

He even put healing before the law, when he healed the man with the withered hand on the Sabbath.

"The doctors of the law reproached Jesus because he healed on a Saturday. He did good on Saturday. But Jesus' love was to give health, to do good and this always takes first place," he said.

Jesus gave his disciples the power to heal the sick and be near them. However, they got caught up in a blame game when they wondered whose fault it was that a man was born blind -- was it caused by the man's sin or his parents?

But Jesus corrected them, saying neither had sinned and he cured the man.

"Here is God's glory! Here is the church's task! Help the sick and not get lost in gossip. Always help, console, alleviate, be close to the sick," the pope said.

Jesus also healed those who did not belong to the people of Israel, like the pagan Canaanite whose child was possessed.

Jesus tested her by saying he was only sent to tend to the lost sheep of Israel and asked whether it was right for him to take food from the children and throw it to the dogs.

But "we all know that mothers fight for their children," the pope said, and the woman fought for her child, telling Jesus to "at least look at me as a dog," and let some scraps fall from the table.

This proved the woman was of great faith, and her daughter was healed.

The pope asked people to teach their children to be empathetic and caring toward people who are ill or suffering so they aren't "numb" and insensitive to their plight, but know how to approach them and experience human limitations.

He urged people and parishes to pray for people who are ill and their families, and to offer concrete assistance and care.

"This Christian closeness, from family to family, is a real treasure for the parish, a treasure of wisdom that helps families in difficult moments and helps people understand the Kingdom of God better than lots of speeches. They are caresses from God."

Pope’s quotes: The reason for Mass