The Catholic activists behind the Supreme Court DOMA fight 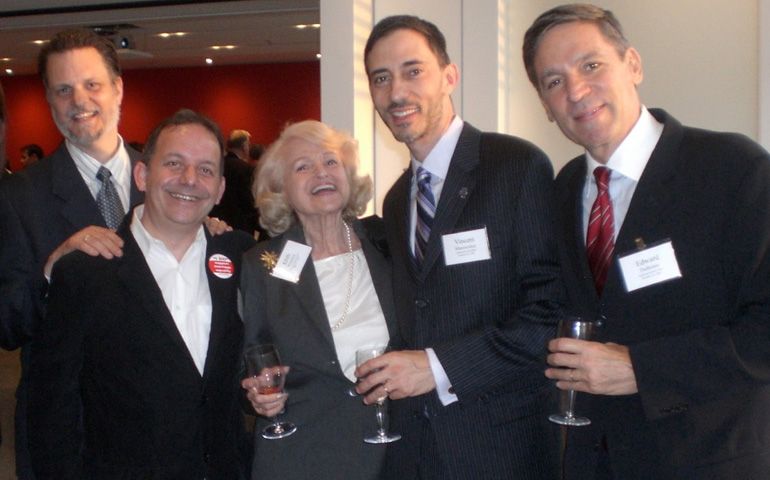 Millions who watched the news Wednesday undoubtedly saw photos of Edie Windsor walking into the Supreme Court with her lawyer, Roberta Kaplan, prepared to challenge the injustices that the Defense of Marriage Act have levied against gay and lesbian couples since it was signed into law by President Bill Clinton in 1996.

What most people will not know, however, is the instrumental role that few members of the New York City chapter of DignityUSA played in this historic moment.

DignityUSA is an organization of gay, lesbian, bisexual and transgender Catholics that was formally expelled by the Roman Catholic church in 1986 by then-Cardinal Joseph Ratzinger. Among the NYC chapter's many members is Brendan Fay, an Irish-born activist and filmmaker who lives in Queens with his husband, Tom Moulton.

For years, Fay was known in the gay community for co-developing (with fellow activist Jesus Lebron) the Civil Marriage Trail, a project that helped gay and lesbian couples travel to Canada to get legally married. Canada had no residency requirement for marriage, and in 2008, New York state made the recognition of valid, out-of-state same-sex marriages mandatory. It was this project that first led Windsor to Fay.

"Edie called for help. It was urgent," Fay says. Windsor's partner of almost four decades, Thea Spyer, had been battling multiple sclerosis since 1975, and doctors had given her only months to live. Fay reached out to Canadian Judge Harvey Brownstone of the Ontario Court of Justice, who gladly performed the ceremony.

Fay was part of a small contingent of friends that shepherded Edie and Thea, who was confined to a motorized wheelchair, to a Toronto hotel, where they were married May 22, 2007.

"There was hardly a dry eye as they exchanged words, 'With this ring I thee wed ... in sickness and in health, till death do us part,'" Fay remembers.

The vows formalized Windsor and Spyer's almost 40 years of love, commitment, sacrifice and fidelity. The couple, who were the subject of the 2009 documentary "Edie and Thea: A Very Long Engagement," met in 1963 at a restaurant in Greenwich Village, where they danced the night away.

"By the end of the evening, I had danced a hole through the bottom of one of my stockings," Windsor told The New York Times last year. Although marriage equality wouldn't come to New York state until 2011, they considered themselves engaged in 1967.

When Spyer received her MS diagnosis at age 45, Windsor, a senior programmer at IBM, took an early retirement to care for her full-time. Although Spyer continued her psychology practice throughout her decadeslong illness, it took almost an hour to get her ready for bed, and preparing to leave the house the in morning could take as much as three hours.

Sadly, after 40 years of devotion, the couple was only able to enjoy legal marriage for 20 months. Spyer passed away in 2009. The loss was so great that a month later, Windsor suffered an attack of stress cardiomyopathy, also known as broken heart syndrome, so severe that her heart actually stopped.

And while her heart was breaking, the federal and state government were threatening to break her financially. Windsor fell victim to the soaring appreciation rates typical of New York property. By 2009, the Hamptons home she and Spyer purchased in 1968 ballooned from $35,000 to over half a million. And the Greenwich Village apartment they bought in the 1970s had quadrupled in value.

After inheriting Spyer's share of the apartment, Windsor was slapped with an estate tax bill of $363,053 from the federal government, and New York state wanted an additional $200,000.

"If Thea had been Theo, I would not have had to pay those taxes," Windsor told the press. She sought legal help from a prominent gay rights organization, who turned her away, insisting it was "the wrong time to act."

Hearing this news, Fay was indignant. After Mass one evening, he enlisted the help of fellow Dignity members Edward DeBonis and Vincent Maniscalco, who have been married since 2002. (Theirs was the first Catholic same-sex wedding announced in The New York Times.) DeBonis, an attorney, immediately thought of Kaplan, whom they had watched argue the 2004 marriage suit filed by 13 couples before the New York State Court of Appeals.

"Robbie was compelling," DeBonis recalls, "and she and her partner, Rachel Lavine, have been passionate about the marriage equality issue for many years."

He called Edie that night, and soon after called Robbie, who met with Edie the next day. "And the rest is gay history, we hope."

"Everything that has happened to make me so famous at this moment is caused by Brendan Fay," Windsor told the crowd a few weeks ago at a benefit concert for the St. Pat's For All parade, an event Fay spearheaded in 2000. "When I first saw the brief that said Edie Windsor vs. the United States of America, I said, 'No, no, blame him, not me!' " she laughed.

The St. Pat's for All parade, which takes place annually in Queens, welcomes all to celebrate Irish heritage and culture regardless of race, gender, creed or sexual orientation. The parade is partly a response to the ongoing ban of gay and lesbian organizations from marching in the famous St. Patrick's Day parade held in Manhattan.

Although both the parade and his ongoing support for Windsor are two of the greatest incarnations of Fay's years of activism, what really drives him is the desire to offer hospitality. "It's all about just reaching out and helping people find liberty, equality and happiness," Fay told Windsor and the St. Pat's for All crowd.

Ever the hopeful visionary, Fay said he believes Windsor's case and the possible end of DOMA are just the beginning of this historic movement. With marriage equality now the law of the land in New York, Fay now leads gay and lesbian couples seeking legal marriage to his own home state.

"I am hoping that the spirit of the Civil Marriage Trail project expands to other states," he says, "and that others will be inspired to join us in offering friendship, help and hospitality to same-sex couples making their way across borders from Poland, Italy, Russia, Ireland and many other countries."

To paraphrase Margaret Mead's oft-quoted aphorism, never doubt that a small group of thoughtful, committed Catholics can change the world.

Justice | The Catholic activists behind the Supreme Court DOMA fight

Preparing in case of deportation

Pope Francis continues to denounce use of chemical weapons