A church that dreams of rights for women can be great, too 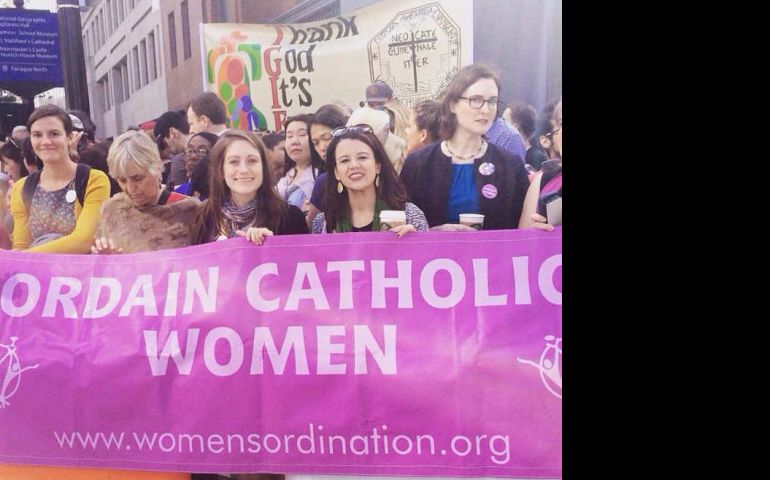 “A nation can be considered great when it defends liberty as Lincoln did, when it fosters a culture which enables people to ‘dream’ of full rights for all their brothers and sisters, as Martin Luther King sought to do; when it strives for justice and the cause of the oppressed, as Dorothy Day did by her tireless work; the fruit of a faith which becomes dialog and sows peace in the contemplative style of Thomas Merton.”

So said Pope Francis to Congress this week.

The line deeply moved most of those who were listening. But it also puzzled those of us who struggle for women’s equality in the Roman Catholic Church.

The pope clearly understands the value of full rights in society, the need to raise up the oppressed, and the importance of dialog. Why, then, can he not connect his own truth to the discriminatory practices inside the walls of his church? Why can’t he see that there is a connection between the struggle for women’s equality in the church and in the world? Why would he continue to perpetuate the mandatory silence on the discussion of women’s ordination?

How could Francis not hear the irony of his own statement? He leads a church of one billion people — an institution that refuses to allow its members to discuss, let alone dream of, the idea that God calls women to full authority and decision-making power in the church.

It’s not as if there isn’t already support for women’s ordination among the church’s flock.

Studies suggest that at least 60 percent of Catholics in the United States support the ordination of women.

They are not alone. According to a 2014 Univision study of 12,000 Catholics on five continents, the majority of Catholics in France (83 percent), Spain (78 percent), Argentina (60 percent), and Italy (59 percent), the United States (59 percent) and Brazil (54 percent) would also like women to have equal standing in ordained ministry.

The Univision study also demonstrated that, even in countries know for traditional Catholic piety, such as Poland (38 percent), Mexico (35 percent) and the Philippines (21 percent), there is sizeable support for women priests.

These numbers prove that those who long for women’s equality in the Catholic church’s leadership are hardly lone voices crying out in a desert. So why can’t we hear them?

At last weekend’s Women’s Ordination Worldwide (WOW) in Philadelphia, the answer emerged painfully from a panel of four male Roman Catholic priests, three of whom, Roy Bourgeois, Tony Flannery and Paul Collins, had been excommunicated for their support of women’s ordination. (Among those gathered in the audience were at least one hundred women who suffered the same punishment for the same act of advocacy.)

Both Bourgeois and Flannery recounted stories of brother priests who refused to join them in advocating for women’s equality. Though their colleagues quietly agreed with him, publicly they kowtowed to the hierarchy’s insistence that the issue of women’s ordination must never be discussed, let alone supported.

Catholics dissent from any number of issues related to church doctrine: contraception, LGBT inclusion, divorce and remarriage. But the punishments for advocating for women’s ordination are uniquely swift and severe. Priests lose their faculties; advocates are denied the Sacraments or excommunicated. The issue of women’s equality in the church remains profoundly threatening to the institution.

It is a lesson learned by the fourth priest panelist, Jack McClure of Most Holy Redeemer parish in San Francisco, who was still in good standing at the time of the WOW panel.

Just two days after his appearance at WOW, McClure was informed by Precious Blood Father and Most Holy Redeemer pastor Matthew Link that the secretary for San Francisco Archbishop Salvatore Cordileone said McClure can no longer celebrate Mass at his parish beyond the end of this month.

As has been reported by NCR in the past, McClure and the parish have distinguished themselves by their inclusive ministry to LGBT Catholics.

Yet Cordileone, who has practically made his career off of fighting LGBT rights and marriage equality, did not censure the parish or its priests for their work with the LGBT community. Supporting women’s ordination, however, was grave enough to rip McClure from the sacraments and his community.

McClure’s story is one of many that expose the dark system of bargaining at work in the Roman Catholic church vis-à-vis women’s ordination. If one refuses to speak out for women’s equality, one gets to keep one’s job, retirement benefits and access to the sacraments. Privileges in the church come in exchange for silence. Obedience demands complicity in injustice.

Of course, Catholics are not alone in this. At another panel during the WOW meeting, women from Jewish, Mormon, Muslim and Anglican faith traditions spoke about their own battles to advocate for the full inclusion of women.

“Gender discrimination in religious traditions impacts all women, not just women of faith,” Kelly said. “Even if you don’t believe in God, this affects you.”

Kelly’s point was amplified powerfully in Mercy Sr. Theresa Kane’s letter to Pope Francis, which she read to WOW’s attendees during the conference’s opening ceremonies.

“I urge you, Pope Francis, to listen to the women of our church and world who cry out in anguish as women throughout the ages have done,” Kane said. “Only radical [at its roots] gender equality in church and in society will begin to diminish the violence, hatred and other forms of inhumanity in our world today.”

The very next day, retired Sacramento bishop Francis Quinn announced his support for women’s ordination in The New York Times. In a follow up article in America magazine, Quinn explained that Pope Francis’ call for dialogue on church issues had emboldened him to break his silence.

Quinn is 94 years old and in assisted living. Yet he dared to break his silence, intrepidly speaking truth about the church’s most perilous issue.

Will others follow suit? Will those majorities who support women’s ordination have the courage to finally speak it aloud? Or will the culture of silence and draconian punishment be perpetuated?

As I have written previously in NCR, the women’s ordination movement is about much more than making women priests. Women across the world suffer disproportionately from destitution, lack of education, violence and slavery. The women’s ordination movement seeks to help church leaders recognize that if they were to fully include women in their leadership as their equals, the church could be a powerful force in dismantling the structures of poverty, abuse and oppression that are intricately tied to the systematic belief that women and men are not equal.

Francis has won global affection because he is a champion of the poor and oppressed, and a fierce promoter of human rights. A church of one billion people and a charismatic pope could have untold influence on raising up women globally to equal status and dignity. As a church, we must begin to see that there is a clear connection between justice for women inside the church and justice for women in the world. And we must speak out about it.

Vatican | A church that dreams of rights for women can be great, too