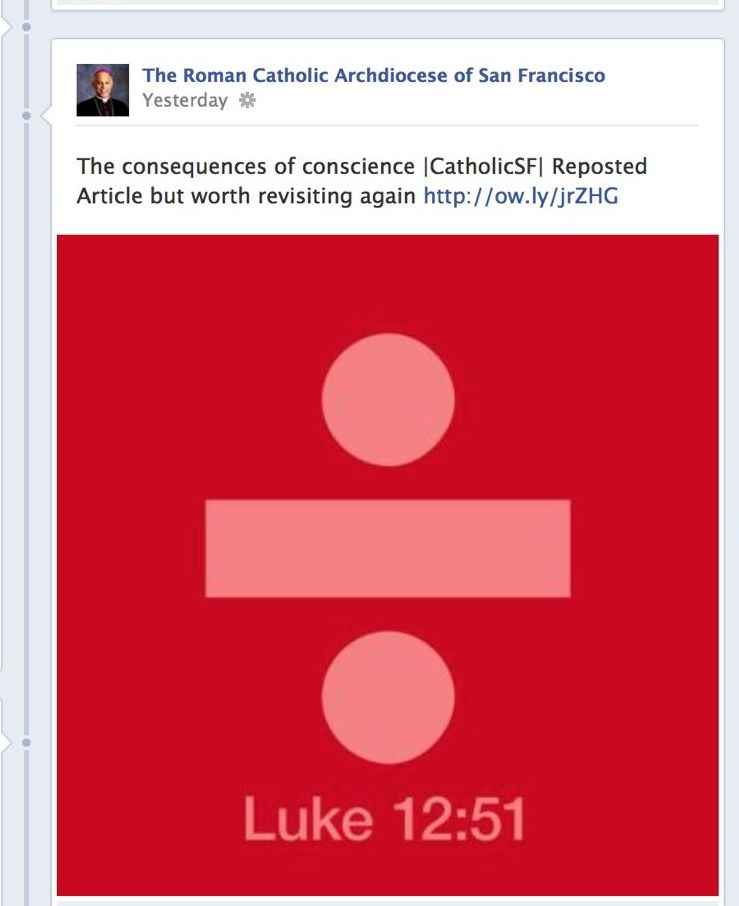 The San Francisco archdiocese posted on its Facebook page a red square with a division sign and the scripture citation "Luke 12:51" below it, in response to an online campaign spreading a similar square -- featuring an equal sign -- created by the Human Rights Campaign, a gay rights group.

Cardinal Timothy Dolan of New York made headlines on Easter Sunday morning during an interview with George Stephanopoulos when he professed his love for gays and lesbians, saying:

“Well, the first thing I’d say to them is, ‘I love you, too. And God loves you. And you are made in God’s image and likeness. And — and we — we want your happiness. But — and you’re entitled to friendship.’”

I’m getting weary of bishops and cardinals who tell me how much they love my gay and lesbian friends and me, while at the same time willfully misunderstanding us, refusing to talk to us and devaluing our relationships. (I would include my transgender friends here, but no hierarch, to my knowledge, has even uttered the “T” word yet.)

Dolan has claimed to love gay people before. Back in June 2011, on the Sunday following the historic passage of marriage equality (which by coincidence was also the day of the NYC gay pride parade) he told the press inside St. Patrick’s Cathedral:

“To the gay community, I love you very much. If anything I ever said or did would lead you to believe that I have anything less than love or respect for you, I apologize.”

Dolan said this just three months after his infamous interview with “60 Minutes” where he likened same-sex marriage to incest, saying, “I love my mom, but I don’t have a right to marry her.”

As he spoke to the press that Pride Sunday, just outside the cathedral doors stood dozens of Catholic LGBT people and their allies in a peaceful act of witness and a call for dialogue with the institutional church. The witness is an annual event organized by members of the New York City chapter of Dignity USA, and it has gone on for decades. Dolan knew they were outside, but like every archbishop before him, he refused to engage with those gathered.

I didn’t believe Dolan’s profession of love back then, and I am no more convinced since Easter Sunday. When Stephanopoulos pressed Dolan to articulate how he could push an agenda against marriage equality without seeming anti-gay, Dolan appeared baffled (one of his standard rhetorical devices), saying:

Apparently, for Dolan, “trying our best” in 2012 looked something like this:

Given the harm of the recent past, it is understandable that Dolan’s head-scratching felt a bit disingenuous to many Catholic gays and lesbians.

Of course, Dolan isn’t the only hierarch claiming to love gays and lesbians while also simultaneously working to ensure that they do not receive equal rights under the law. When Archbishop Salvatore Cordileone was named to his current post in San Francisco, he declared in his first press conference:

“The challenge for us in the church is to help people who are in a situation of a sexual orientation where they feel alienated from the church and sometimes experience it very directly. We need to continue to learn how to be welcoming, let them know that we love them and we want to help them.”

Cordileone made this statement in the wake of his years of intensive organizing against marriage equality in California, which earned him the dubious title “Father of Proposition 8.”

Cordileone further demonstrated his perverse notion of love this past Holy Thursday when he literally created a sign of division on the San Francisco archdiocese’s Facebook page.

The archbishop and his communications team posted a graphic of a white division sign and the citation “Luke 12:51” on a red square. (Luke 12:51 is the verse in which Jesus says, “Do you suppose that I came to grant peace on earth? I tell you, no, but rather division.”)

The symbol was intended to mock an image, created by the Human Rights Campaign (a gay rights group), that depicts a white equal sign on a red square. The group encouraged supporters of marriage equality to use the symbol as their Facebook avatar while the Supreme Court heard arguments on issues related to same-sex marriage and the Defense of Marriage Act.

Much as Cordileone’s Holy Thursday message offends me, at some level I appreciate his graphically transparent depiction of his

beliefs. Dolan, on the other hand, seems to want to ride the waves of good vibes being felt by Catholics and non-Catholics worldwide in response to Pope Francis’ recent series of humble and inclusive acts.

But for all of his radical reaching out to the margins, less than three years ago, the new pope himself had less-than-loving words for gay and lesbian couples seeking equal rights. In a strongly-worded letter to a group of Benedictine nuns, then-Cardinal Jorge Bergoglio wrote:

“Let's not be naive: This is not a simple political fight; it is a destructive proposal to God's plan. This is not a mere legislative proposal (that's just its form), but a move by the father of lies that seeks to confuse and deceive the children of God… Let's look to St. Joseph, Mary, and the Child to ask fervently that they defend the Argentine family in this moment... May they support, defend, and accompany us in this war of God.”

While it may be true that Dolan, Cordileone and even the new pope are seeking a more pastoral approach to gays and lesbians, I really wish that they would stop calling it love.

Love does not ignore letters pleading for dialogue and reconciliation.

Love does not turn away spiritually hungry people from God’s Eucharistic table.

Love does not use spiritually violent rhetoric against a marginalized community’s fight for justice.

When we love another person, we genuinely desire to know her or him. When we love, we long to listen to the beloved and to learn his or her story. To love in this way, we must be authentically present to the beloved. This kind of love is risky because it demands vulnerability on the parts of both the lover and the beloved.

If members of the hierarchy took the risk of truly listening to gay and lesbian couples, they might find, as the majority of U.S. Catholics have, that many of these couples equally embody the faithfulness, devotion, sacrifice and fruitfulness that characterize the best heterosexual relationships.

They might open themselves up to the possibility that God is speaking new truths through the voices and lives of gay and lesbian couples and transgender persons. They might see that not only are same-sex couples entitled to equal rights and protection, they have as much potential to honor the institution of marriage as opposite-sex couples.

But that quality of listening requires true presence and vulnerability. For now, men like Dolan and Cordileone continue to insist that gays and lesbians do not know the truth about themselves and their relationships. They contend that the institutional church’s understanding of gays and lesbians is based on absolute truth, and they tell gays and lesbians that their own self-understanding is based not on truth, but on personal opinion, whim or caprice.

So, until Dolan, Cordileone and their fellow prelates are willing to offer gays, lesbians and transgender persons mutual dialogue, deep listening and authentic presence, I respectfully ask that they stop telling us they love us.

Call it politeness, or civility or an attempt at tolerance, but please don’t call it love.