In East Harlem, another Catholic funeral on the sidewalk 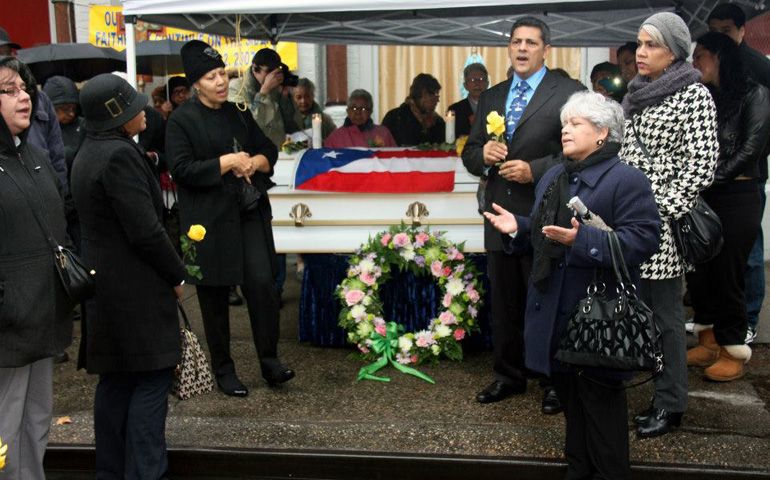 Mourners at Carmen Villegas' funeral on the sidewalk outside of Our Lady Queen of Angels in East Harlem, N.Y. (Marina Ortiz, East Harlem Preservation Inc. http://www.eastharlempreservation.org/)

Six years ago, she and a group of parishioners made local headlines when they protested the closing of Our Lady Queen of Angels, a church that had served their East Harlem community since 1886. The parish was among 21 churches and nine schools in the Archdiocese of New York that were casualties of Cardinal Edward Egan's cost-saving closures in 2007.

When almost 40 parishioners assembled for a peaceful witness on the sidewalk outside of the church on East 113th Street on the evening of Feb. 12, 2007, the archdiocese saw fit to send in private security guards to "protect" the church from its lifelong members.

Villegas managed to find an unlocked door on the side of the church and led two dozen parishioners into the building. They sang hymns and prayed the rosary, planning to keep vigil in the cold, dark church until archdiocesan officials would be willing to dialogue with them.

But after 90 minutes of negotiations between the NYPD, the parishioners in the pews, and the parish priests (who allegedly sequestered themselves in the sacristy after the parishioners managed to access the building), the police ordered the protestors to leave the church or face arrest. In the end, six parishioners, including Villegas, were led out of Our Lady Queen of Angels in handcuffs. A chorus of protestors chanting "Save our church!" greeted them as they were led into a police van.

Facing the prospect of never stepping into their beloved parish again, the women decided to take their prayers to the street just outside the walls of Our Lady Queen of Angels. They met on the sidewalk every Sunday and holy day of obligation to pray, to sing, to celebrate and to mourn, regardless of biting cold or blistering heat, blowing snow or pouring rain.

The services were typically led by Villegas or one of other arrested women. Dozens of parishioners, many of whom had baptized their children, celebrated their weddings, or said final farewells to family and friends inside Our Lady Queen of Angels, joined them on the sidewalk.

The women were always careful to tell the press that they were not celebrating the sacraments at these services. Their only sacramentals were prayer, song and their presence to one another.

In an effort to keep the parish open, the women developed a plan for managing the church's finances independently. But the archdiocese showed no interest in their ideas. "The realignment was not a question of money, it was a question of having our resources, our resources of people, used most effectively," said archdiocesan spokesman Joseph Zwilling.

They continued their weekly prayer services, and made headlines again six months later when Carmen Gonzalez, one of the women who had been part of the vigil that February night, died of cancer at age 72. Although Gonzalez wanted to be arrested, Villegas discouraged her because of her illness.

Gonzalez had volunteered at Our Lady Queen of Angels since the 1950s. Her four sons graduated from the parish's school, which, unlike the church, remained open. In fact, Egan had temporarily reopened the church building to accommodate the school's graduation ceremony in June 2007.

The Gonzalez family petitioned the archdiocese to again reopen the church for one day in order to honor their mother's last request to have her funeral held in the parish she called home for more than 50 years. But Egan refused.

Rather than have their mother's funeral at a church she did not know, the Gonzalez family held her funeral on the sidewalk outside of Our Lady Queen of Angels. Renowned mujerista theologian Ada Maria Isasi-Diaz, a member of the parish who passed away in May 2012, was among many mourners to speak at the streetside service.

"Church is not a building. Church is the community," Isasi-Diaz said. "We take very literally the teaching that the church is a community of the believers."

Gonzalez's sidewalk funeral prompted the New York Daily News to call the incident "the most disgraceful episode in the checkered reign of Edward Cardinal Egan."

But the situation would be no different under Cardinal Timothy Dolan.

Last month, Villegas herself succumbed to breast cancer just two weeks before Christmas, at the age of 58. It was her dying wish to have her body lie, for one last time, inside of the church she called her spiritual home for more 30 years. "What she so yearned for in life was denied her in death," wrote David Gonzalez in The New York Times last month. "Although friends, family and politicians asked the archdiocese -- in writing, even -- to open wide the doors for one final adios, it did not."

Although Villegas was born in New York City, she spent her childhood in Puerto Rico. She studied liturgy and scripture in Caracas, Venezuela, and once had dreams of becoming a nun.

But Villegas' life of service was not limited to the church. She dedicated her career to coordinating the HIV and infectious disease program Lincoln Hospital's Medical and Mental Health Center in the South Bronx and was an adjunct professor at Manhattan's Touro College.

A longtime member of her community board, she also served on the boards of ASPIRA New York, a nonprofit that fosters educational excellence and civic responsibility among young Latinos, and SFDS Development Corp., an organization that provides high-quality housing to low-income, elderly and homeless individuals.

Villegas could be found every Sunday praying with her community outside the walls of her beloved parish, absent only when she was too weakened by cancer treatments to leave her apartment.

During her 90-minute memorial, mourners prayed over her white casket, which was draped in a Puerto Rican flag and placed under a white canopy to protect it from drizzle.

"She had that combination of being actively religious and active in the community. You could say she came from the liberation theology tradition," Villegas' friend, William Gerena-Rochet, told one reporter at the funeral.

Many considered Villegas the spiritual champion of her East Harlem neighborhood, commonly known as El Barrio. A woman of deep hope, perhaps she never could have imagined that she would spend her last moments inside of Our Lady Queen of Angels church in handcuffs, her final departure from the sanctuary a police escort.

To this day, archdiocesan officials still have not ventured into the street to speak with the parishioners of Our Lady Queen of Angels.

The scene of this community worshipping on the sidewalk is, to me, a striking image of the brokenness of our current church. The faithful, desperate to continue the life of a church they love, are literally locked out of parish they have long called home. Women lead weekly liturgies outside of a church that was shut down because of a lack of priests.

But the image is also a powerful vision of what I understand to be "grace on the margins." Although the parishioners are aging and small in number, they have the spiritual gumption to realize that they themselves are the church, and they refuse to be refugees bullied into an unfamiliar parish.

Through their spirits, their words and their songs, they are showing us all the face of the church that emerged and is emerging among those marginalized by religious leaders. On the sidewalk, they have found the God who has been forced to dwell outside the walls of the institutional church, too.

In East Harlem, another Catholic funeral on the sidewalk

Archbishop Sheehan: How to lose Catholics and alienate people