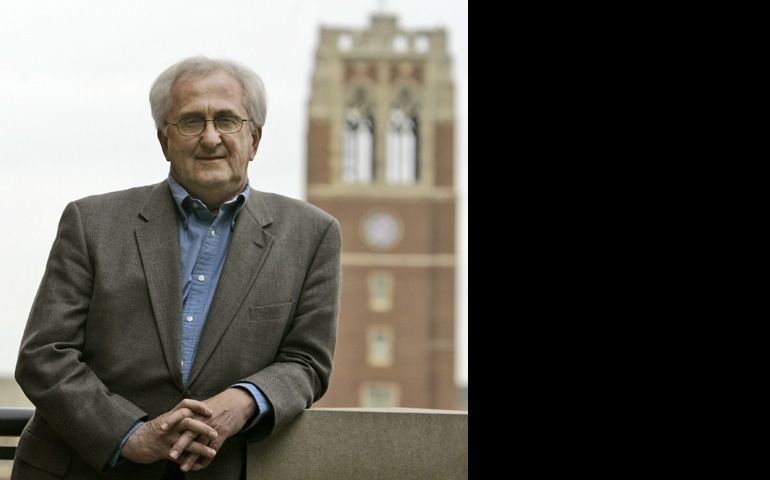 For the past 15 years, Fr. Donald Cozzens has distinguished himself as a commentator on religious and cultural issues, especially those relating to the sexual and financial crises gripping the Catholic church. His best-selling book The Changing Face of the Priesthood exploded onto the religious publishing scene in 2000, receiving both broad acclaim and fierce critique -- and changing the direction of his ministry as a priest.

He went on to write four more books, including Sacred Silence: Denial and the Crisis in the Church (2002) and Notes From the Underground: The Spiritual Journal of a Secular Priest (2013). He now travels widely, lecturing on the upheavals engulfing the Catholic church and leading retreats for priests and religious. He is also a writer-in-residence and adjunct professor at John Carroll University in Ohio.

In Cozzens' latest work, Master of Ceremonies, published by In Extenso Press, he revisits themes that have dominated much of his writing: clergy sex abuse, clericalism, Vatican intrigue and corrupt bishops. But this time, he spins the narrative in the form of a mystery novel.

I recently spoke with Cozzens recently about his new tale of secrecy and silence, murder and suspense.

Manson: Why did you choose to write your first novel rather than another nonfiction book? Are you a fan of suspense novels?

Cozzens: We know that stories compel us in ways that only the best of nonfiction can. So I thought that telling a story about our wounded church might be something I should try. And once I started, I simply couldn't stop. I do like suspense novels, and I'm happy to have the book described as a thriller, because I wanted the story to move at a fairly fast pace. One of my colleagues in the English department here at John Carroll, a novelist himself, said that it galloped.

You have embedded some of the best insights from your nonfiction within this story. Were you hoping to bring your ideas to a new audience?

Well, yes, a broader audience. Most of my readers are Vatican II Catholics who are worried that their children and grandchildren are missing the spiritual depth and sacred character of the church and her sacraments. At the same time, they're convinced that the church's penchant for secrecy and control has contributed to its loss of credibility in many circles today.

Non-Catholic readers will get a window into how some church leaders think and scheme to protect the church, and sometimes in ways that might make the Mafia blush. And they will see some honest bishops and priests struggling to make the church what it should be, what Pope Francis is talking about. I would like, of course, to see Master of Ceremonies judged as a good read for the general public.

Why did you choose to make clergy sexual abuse and its subsequent cover-up a key part of the plot?

The church is trying to cope with a number of scandals and urgent pastoral issues today. I'm thinking of the fraud and bank scandals, bishops living like princes, the church's attitude toward the divorced and remarried, its failure to really listen to Catholic sisters who teach and minister with integrity and humility. The list goes on. But nothing has so rocked the church as the sexual violation of our teens and children and the repeated bungling of many of our bishops as they tried to contain and spin and manage the scandals.

Our laity is saying to the bishops, you might mess with my money, but don't you dare mess with my children. So sexual abuse and its cover-up remain the stick in the eye of the church. But the reader will also find among the plot lines of the novel faith-killing revenge, naked clerical ambition, and misplaced loyalty. Still, the net holding the narrative in place is the abuse of a young boy by a priest who later becomes an archbishop.

The story involves a secretive group called the Brotherhood of the Sacred Purple. Do you think groups like this really exist, or were you simply trying to infuse Da Vinci Code-like intrigue into the novel?

I've had some fun with the Brotherhood of the Sacred Purple. In the novel, it's a secretive band of bishops and priests who are hell-bent on saving the church from pastoral-minded bishops who, in their judgment, threaten what they call the church's supreme center -- that is, papal infallibility, hierarchal patriarchy, doctrine carved in stone, and the like. And they're willing to do whatever it takes to achieve their sacred duty as they see it. Groups like this exist today, but I certainly hope they're not as ruthless as the Brothers of the Sacred Purple. Da Vinci Code intrigue? No. Master of Ceremonies isn't as dark or complex as Dan Brown's novel. But intrigue there is.

You have several villains in the story, including Msgr. Aidan Kempe, an Italian bishop known only as "M," and a murderous former member of the Italian secret service named Georgio. Are any of these based on real people?

They're all products of my imagination.

Your protagonist, Bishop Bryn Martin, the former "Master of Ceremonies" of the title, is clearly a man of integrity. Yet, he's flawed. Tell us about him.

As a master of ceremonies and as a diocesan official, Bryn Martin has seen clerical climbing up close and he detests it. Yet, he carries his own guilt about a certain event that likely contributed to his being named a bishop. His complex relationship to two of his archbishops is a main plank to the novel.

Mirroring the male character of church leadership, most of the characters in this book are men. Yet you have several strong women in the story. Can you describe them?

I'm glad you asked. Both Margaret Comiskey and Ella Landers are loyal, lifelong Catholics. Comiskey works in the chancery of the Baltimore archdiocese, and while she admires most of the bishops and priests who work there, she's no fool to their human foibles and vanities. Landers, Comiskey's lifelong friend, is a former foreign service officer who was also a covert CIA agent.

I love these characters. Together, they're dynamite. The action and suspense mount as these two women break through the archdiocese's curtain of secrecy.

There are several discussions in the novel about celibacy and priestly life. How do they reflect your own thinking?

It isn't any secret that while I think celibacy can be a healthy way to follow Christ and a true witness to the Gospel, as I wrote in my book Freeing Celibacy (2006), it is fundamentally a gift of the Spirit -- a charism, in church language. And since God's gifts can't be made into law, it shouldn't be legislated as it is today in the Latin rite of the priesthood. So the answer is yes. The discussions do reflect my thinking on mandatory celibacy.

Who do you hope will read this book? Are you going to send one to your own bishop? How about Pope Francis?

While my audience is the general public, I'd love to see my brother priests read Master of Ceremonies. I think they might take some comfort from it. And maybe see themselves in it. There is an underlying sadness in Bryn Martin that touches the sadness that many priests are feeling today. My hunch is that if Pope Francis read it he would give it a knowing nod. I'll leave it at that.

Former altar boy on monsignor: 'I have never seen him touch or harm anyone'

The resignation of Bishop Finn