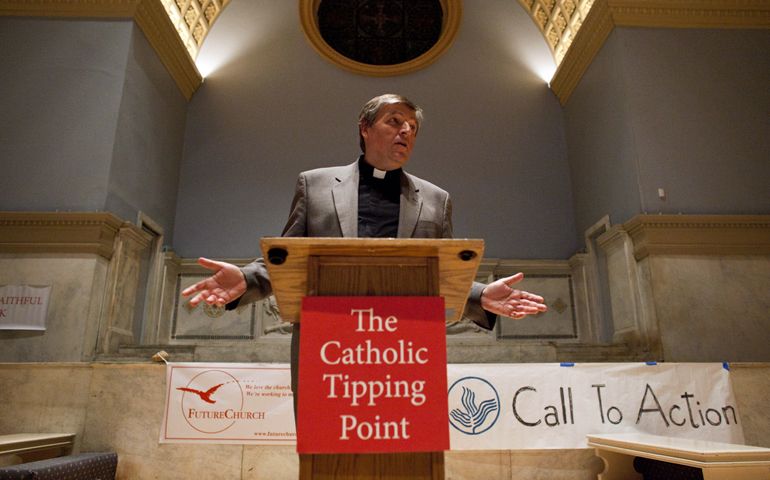 Fr. Helmut Schüller should be on summer vacation right now.

Instead, the Austrian priest, who gained international attention in 2011 for his "Call to Disobedience," has chosen to spend his time off from parish ministry offering a presentation titled "The Catholic Tipping Point: Conversations" in 15 U.S. cities.

The tour kicked off Tuesday night at Manhattan's Judson Memorial Church, a historic community in Greenwich Village with affiliations to the United Church of Christ and the American Baptist Church.

Tuesday night, however, the space was filled with 230 reform-minded Catholics who braved dangerously high heat and humidity to hear Schüller's vision for church reform and a renewed priesthood.

Schüller is quick to note he is only one priest among a large community of clergy and lay supporters who are calling on the institutional church for desperately needed reforms.

Studies suggest that for every 100 Catholic priests who retire, only 30 are available to replace them. To date, the hierarchy's response to this crisis has been to close and merge parishes rather than to open ordination to all who are willing and able to serve.

In 2006, Schüller and a group of fellow clergy members founded the Austrian Priests' Initiative as a way to go public with their concerns about the shrinking priesthood, the merging of parishes and the inordinate pressures being placed on the dwindling number of parish priests.

Since the launching of the "Call to Disobedience," Schüller has been clear that the Austrian Priests' Initiative does not believe in disobedience for the sake of contradiction. Rather, they promote a "graduated obedience," first to God, then to their consciences and, finally, to church order.

At least 425 of Austria's 3,800 priests have endorsed the Austrian Priests' Initiative's call, and the organization estimates that 70 percent of Austrian Catholics agree with their platform.

"Because as priests, we are members of the hierarchy, the hierarchy became nervous," Schüller told the crowd. But he insists the movement "was initiated out of deep sorrow for the future of parish communities."

Schüller, who previously served as president of Caritas Austria, was appointed vicar general in 1995 by Austrian Cardinal Christoph Schönborn but served simultaneously as a church pastor.

Both roles, he said, have given him insight into the current state of the institutional church. As vicar general, he learned that the structure of the church "does not allow too much space for reform or questions," while as pastor of a parish, he realized that, once he retires, "I will leave my community to an uncertain future."

Schüller said his gravest concern is that the priest shortage is depriving baptized Catholics of access to the Eucharist, which is the "spiritual center of our communities."

"It is the bread of heaven, and we must have it together," he said.

The faithful are further deprived by the parish mergers that result from the shortage of clergy.

"This is the greatest burden for priests," Schüller told the crowd. "They have the impression that they cannot fulfill their service anymore. They are forced to hurry from one base to the other."

He said the most painful statement priests hear from parishioners is, "I know, Father, that you haven't got much time."

"This is horrible," Schüller insists, "because this is the center of our ministry." If a priest is forced to give the impression he cannot be present to his community, "it is the end of his ministry," he said.

The realities of parish life, Schüller said, demonstrate an urgent need to open the priesthood to anyone who has the gifts to lead, inspire and create trust, especially women.

"We are supposed to be promoting the biblical message that men and women are made in the image of God," Schüller said. "How can we promote this message without representing it in our structures? This is not a question of the demands of modern society, but question of our original message. We must rediscover this common image for God."

In Austria, reform-minded parishes have been intentional about practicing reform in the framework of their own communities. This includes allowing laypeople to offer homilies and lead communion services when parish priests are away. Catholics who are divorced and remarried outside the church are permitted to take Communion, as are Protestants. Gay and lesbian couples are also welcome in the community and to the eucharistic table.

"Eucharist must not be an instrument of sanctions," Schüller said. "The highest symbol of Communion is acceptance."

As priests, Schüller said, "we have power, which means we are responsible to use that power." Church reform movements must not be left to the laity alone, he said. "We must be companions to these movements."

As Schüller travels the country during the next three weeks, he will also have closed meetings with priests to hear their concerns and encourage them to band together among themselves and the laity.

Schüller would especially like reform-minded communities to find solidarity with one another. One of the goals of the "Catholic Tipping Point" tour is to build up an international network of reform groups. Ten progressive Catholic organizations, including FutureChurch, Call to Action, DignityUSA, and Voice of the Faithful, are sponsoring the tour.

One of Schüller's deepest hopes is that the institutional church will create a system of fundamental rights for all of the baptized. "We should speak not about laypeople, but 'church citizens,' " he told the audience. "The word 'lay' suggests 'without competence or experience.' "

"The Christian understanding of human beings is that they have rights and responsibilities and a special dignity that must be respected," Schüller said. "Therefore, they are entitled to participate in the church's decision-making."

"Full participation of church citizens is a question of respect for human beings," he said. "Democracy was a step forward in modern society, yet our church fought against it for centuries."

The lack of fundamental rights in the church, Schüller said, was the basis for the "Call to Disobedience." "We have both the suspicion and the experience that our obedience is being abused by church leaders in order to keep down church reform," he said.

"It is problematic to give obedience to leaders who are not accountable for what they are doing with their power," he added.

For someone who has been associated with disobedience, Schüller's style is remarkably mild and soft-spoken. Nevertheless, this did not keep the Vatican from stripping him in 2012 of his title of monsignor, a title he received in 1991.

"It was not the tragedy of my life," Schüller quipped during the question-and-answer period.

Because Schüller is most interested in learning about the struggles of reform-minded Catholics in the United States, his 30-minute presentation was followed by almost one hour of dialogue with attendees.

A Roman Catholic Womanpriest (RCWP), Gabriella Velardi Ward, asked Schüller what he and the Austrian Priests' Initiative thought of their movement, which began in Europe.

Schüller said while his organization respects RCWP and sees it as a courageous movement, their desire is to see the whole church open up to the ordination of women, not just a small segment.

"We see ourselves as walking the walk and living the change we want to see. We are going through the back door so that one day, women can go through the front door," Velardi Ward replied.

Schüller, engaging in the kind of respectful listening he wants from the hierarchy, responded, "Then maybe we should respect you as a prophetic movement."

Another audience member asked whether this discussion is relevant to the Roman Catholic church beyond Europe and the United States.

"We have been told that the church in Europe and the U.S. is a sick church or a diminishing church," and the church in Africa and Latin and South America is proof that a conservative church is successful, Schüller said. "But the questions that our modern society is confronting will eventually arise in these parts of the world, too, and in some places, especially megacities, they already have."

Schüller sees the church in Europe and the United States as a "laboratory of the future" where the church can engage with the questions and challenges of modern society.

Finally, the question likely on the minds of many arose: Does Schüller feel hopeful about Pope Francis?

"There is a feeling of relief, I think, about the new pope," he said. But the question remains, "Can he make these gestures into systemic changes, or will he be sidelined by the Vatican system?"

"Real change will happen when he starts to practice collegiality through new synods and decentralized papal power," Schüller said. "Hope is there. Let's see if he can continue what he is doing as an individual for the whole system."

Schüller's next stop on the "Tipping Point" tour will be in Boston, where Cardinal Sean O'Malley barred him from speaking on Catholic grounds.

Christ, not priest or faithful, is at center of the liturgy, pope says