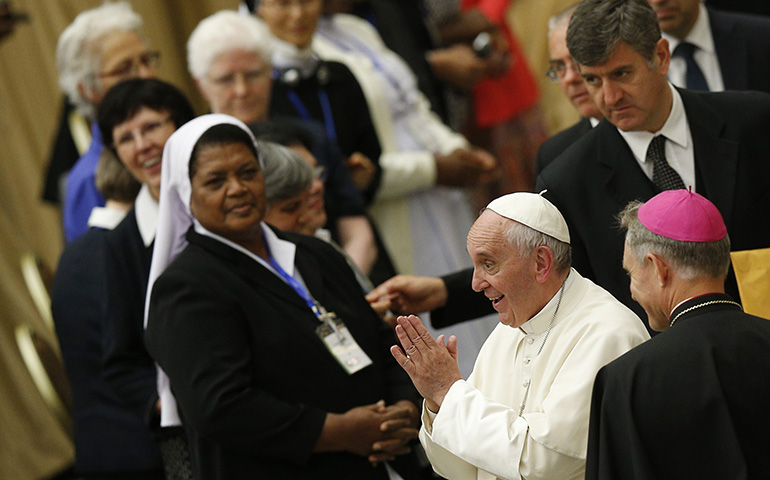 Pope Francis gestures during an audience with the heads of women's religious orders in Paul VI hall at the Vatican May 12. (CNS/Paul Haring)

Several years ago, I asked in this column, "When does our hope for Pope Francis become denial?"

After last week's frenzy over women deacons, I believe I may have found my answer.

The glimmer of hope came, of course, when Francis agreed to launch a commission to study the role of women deacons in the early church. The idea of a commission was suggested to the pope by a group of women religious during their annual International Union of Superiors General (UISG) meeting.

Hours later, just about everyone saw some version of a headline declaring that the pope was considering ordaining women deacons.

Unfortunately, few people had the time to read the full story behind the headline. And even fewer people had time to read Francis' complete response to the sisters' question about women deacons. (You can find it here in Italian and English.) If they had, they would have heard the pope reassert all of the theological ideas that prevent women from any form of equality in the Roman Catholic church.

Here are a few choice quotes from Francis' conversation with the UISG (with additional commentary from me):

Because women look at life through their own eyes and we men cannot look at it in this way. The way of viewing a problem, of seeing things, is different in a woman compared to a man. They must be complementary, and in consultations it is important that there are women.

Here, the pope, for the umpteenth time, declares his unwavering belief in complementarity, the idea that, by creating male and female bodies differently, God shows us that God intends for men and women to have separate roles and purposes in the church and in the family.

Francis then reinforced the ban on women homilists and women priests, saying:

There is no problem for a woman -- religious or lay -- to preach in the Liturgy of the Word... . But at the Eucharistic Celebration there is a liturgical-dogmatic problem, because it is one celebration -- the Liturgy of the Word and the Eucharistic Liturgy, there is unity between them -- and He Who presides is Jesus Christ. The priest or bishop who presides does so in the person of Jesus Christ. It is a theological-liturgical reality. In that situation, since women are not ordained, they cannot preside.

In other words, in any liturgy where the Eucharist will be consecrated, a woman's body renders her illegitimate to speak the words of a homily.

But it is necessary to differentiate clearly: one thing is the preaching in a Liturgy of the Word, and this can be done, but another thing is the Eucharistic Celebration; here there is another mystery. It is the mystery of Christ's presence and the priest or the bishop who celebrate in persona Christi.

Francis is delicately saying that because women do not have a phallus, they cannot "image" the body of Christ. In what is surely a great cosmic irony, a woman's God-given body prevents her from transforming bread into Christ's body.

Francis then told the UISG women what kind of image they can be for the church -- and what kinds of images they cannot be:

Yet again, Francis is reminding women that their bodies determine their destiny in the church. So, in what is surely the greatest cosmic irony, this means that if Mary, who gave birth to the body Jesus, were on Earth today, even she could not consecrate bread and wine into his body and blood. And Mary Magdalene, who was first to preach the Good News and whom John Paul II called the "Apostle to the Apostles," could not offer a homily at Mass.

Francis then tells the women that, like the church, they are called to the role of wives:

The Church is woman ... she is a woman married to Jesus Christ, she has her Bridegroom, who is Jesus Christ... . And a woman's consecration makes her the very icon of the Church and icon of Our Lady. We men cannot do this. This will help you to deepen, from this theological root, a great role in the Church. I hope this does not elude you.

It's hard to imagine that this nuptial symbolism, used so frequently by Pope Francis and his intellectual forbearer John Paul II to reinforce women's fixed place in the church, has eluded any of these sisters. But it was thoughtful of Francis to make sure they understand.

Francis concludes by warning women religious against "the temptation of feminism," saying:

We must not fall into the trap of feminism, because this would reduce the importance of a woman.

In case it eluded you, the "importance of woman," is what Pope Francis (quoting John Paul II) calls "the feminine genius." That is, the reality that God, by giving us uteruses as well as genitalia that "complement" the male anatomy, has called women specifically to be wives and mothers, receivers and nurturers.

I am belaboring these quotes from the pope's conversation with women religious in order to make this point: Francis' theological imagination makes it impossible for women to achieve equal decision-making power and sacramental authority in this church. And it's time we faced it.

I realize that, among progressive Catholics, the source of hope for Francis comes from a place of love -- a love for the church, a desire to see it serve its people well, a longing for it to be more fully a force for good in our world.

But no one is served from only reading sound bites that seem to offer an inkling of hope, while downplaying or ignoring altogether the words from the same statement that demonstrate clearly the injustice that women are facing with this pope.

After the enthusiasm exhibited by so many last week, some may have been led to believe that sacramentally-ordained women deacons are a fait accompli. But the Francis' own words suggest that women are far from being recognized as genuinely equal and that there is still so much work to be done. These sounds bites and headlines have only expanded the myth of Francis' revolutionary attitude toward women.

From early in Francis' pontificate, criticism of the papacy and the Vatican seemed to fall out of favor. This widespread refusal to cast a critical eye on the pope's understanding of women is simply irresponsible -- and it has an especially perilous impact on poor women.

Why? Because the Roman Catholic church still has inordinate power over the bodies of women in many parts of our world. Pope Francis' unshakeable belief that the purpose of women is to be mothers, nurturers and "complements" to men does not only reinforce the ban on women's decision-making and sacramental power in the church -- these beliefs are also tied directly to the church's teachings on sexual and reproductive health, especially contraception and abortion.

For example, Pope Francis' understanding of women is part of the same ideology that led to the creation of Draconian anti-abortion laws in El Salvador as well as countless Catholic-sponsored movements to keep contraceptives out of the hands of women, particularly poor women, whose need to manage the size of their families is a matter of life and death.

This same ideology keeps women, day after day, sacramentally powerless and banned from pulpits in Catholic churches, while the people of God long for ordained ministers who can offer meaningful baptisms and funerals, thoughtful homilies, and comforting last rites.

We can wax on about "tiny steps forward" and "slow pace of the development of doctrine." But the beliefs about women that are espoused by Pope Francis are causing untold suffering to women, to families, and to the life of the church itself.

After years of pain and division caused by previous popes, there is little wonder that so much hope has been placed in Francis' papacy. And there are some good, concrete reasons to have hope in him. But we must be honest about the limitations that Francis places women's bodies and women's power, and we must not be afraid to let our prophetic voices rise up about it.

The lives of countless women and the future of the church itself depend on it.