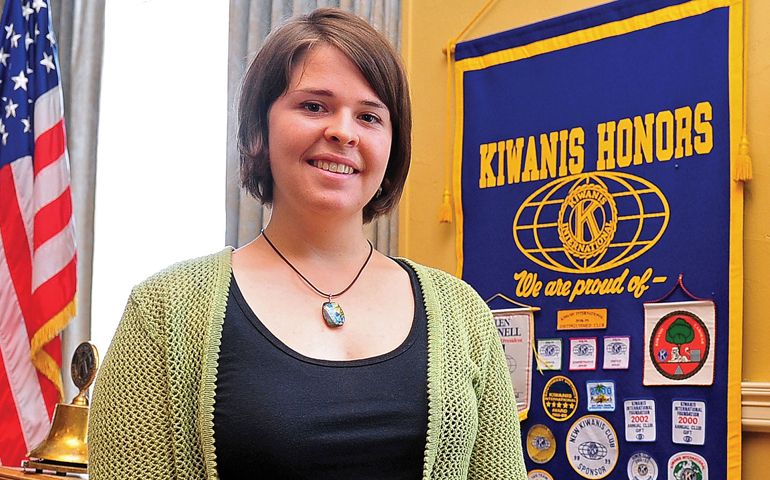 When Kayla Mueller's death was confirmed earlier this week, statements from political leaders, including President Barack Obama and Gabrielle Giffords, offered litanies of the good works performed by the 26-year-old captive of Islamic State militants.

After she graduated college in 2009, Kayla worked with humanitarian aid groups in northern India, Israel and Palestine. She returned home to Arizona for one year, in 2011, spending her time at an HIV/AIDS clinic and volunteering at a women's shelter at night.

In 2012, the war in Syria and its resulting refugee crisis compelled Kayla to travel to the Syrian/Turkish border, where she worked with Support to Life and other humanitarian organizations. Her local Arizona newspaper chronicled her work with Syrian children. The article describes her playing, painting, and drawing with children in refugee camps and recounts an incident where she was able to reunite a man with a 6-year-old family member after a bombing.

"For as long as I live, I will not let this suffering be normal. [I will not let this be] something we just accept," Kayla told the reporter at the time. "It's important to stop and realize what we have, why we have it and how privileged we are."

In August 2013, two months after that article was published, Kayla was kidnapped as she was en route to catch a bus to Turkey after leaving a hospital in Aleppo.

Since the announcement of her death, a common refrain has been that Kayla did more in her 26 years than many do in a lifetime. That certainly is true. But I also believe that Kayla was able to grasp a deeper understanding of God than most people do during their lifetimes.

That truth became clear in the statement released by Kayla's family soon after the world learned about her death. Their brief statement begins with a quote from a letter that Kayla wrote to her father on his birthday in 2011:

"I find God in the suffering eyes reflected in mine. If this is how you are revealed to me, this is how I will forever seek you.

Kayla was no more than 23 years old when she wrote those words. To encounter God in joy, peace, and love is its own spiritual gift, but to see God's face in the eyes of those who suffer unspeakable violence and desolation is a charism that is rare at any age. I'm not sure that even great spiritual writers like Dorothy Day and Elie Wiesel came to such a realization about God in their early 20s.

I'm not sure which Christian denomination Kayla was from, and it doesn't matter. In what little writing we have of hers, she demonstrates that she truly understood the Gospel that Jesus was trying to preach to all of us.

From what little we know of her life in captivity, it is clear she tried to practice one of Jesus' most challenging teachings: "Love your enemies." She did not treat her captors with hostility. The Guardian reports that Kayla, in fact, "tried to teach her guards crafts, including origami."

"She did ordinary things in extraordinary measure," said Kathleen Day, head of United Christian Ministry at Northern Arizona University, where Kayla was a student.

I have little doubt she also prayed for those who were persecuting her.

If anyone had a reason to be angry with Islamic fundamentalists, it would have been Kayla, but in a letter she wrote to her family from prison in August 2013, she shows not a shred of bias or hate. Any resentment she harbors seems directed at herself for the pain she has caused her family. "I will never ask you to forgive me as I do not deserve forgiveness," she wrote.

If anyone had a reason to curse fate, it would have been Kayla. But she does not complain or wallow in self-pity. Instead, she is entirely self-giving. "If you could say I have 'suffered' at all throughout this whole experience it is only in knowing how much suffering I have put you all through," the letter states.

Kayla did not know if she would face death when she wrote that letter to her family, but her words suggest an experience of God that one often sees in other imprisoned would-be martyrs, like the Rev. Martin Luther King Jr. and Dietrich Bonhoeffer. She wrote:

"I remember mom always telling me that all in all in the end the only one you really have is God. I have come to a place in experience where, in every sense of the word, I have surrendered myself to our creator b/c literally there was no else ... + by God + by your prayers I have felt tenderly cradled in freefall."

In an especially powerful demonstration of spiritual maturity, Kayla does not suggest that God somehow wills all of this suffering or that suffering has some higher purpose. Instead, she sees the darkness surrounding her for what it is and summons up the strength and vision to find grace in it:

"I have been shown in darkness, light + have learned that even in prison, one can be free. I am grateful. I have come to see that there is good in every situation, sometimes we just have to look for it."

The circumstances of Kayla's death remain uncertain. But regardless of whether her demise ultimately was caused by the dark forces of religious fundamentalism or retaliatory violence, there is little doubt that her death should be considered a martyrdom. Kayla's faith inspired her to take great risks to love the afflicted, heal the wounded, and comfort the exiled. Her deep desire to be a force for good in a shattered place led to her capture and death.

Over the past several decades, a perverse form of Christianity has emerged in American culture: a Christianity that conflates the glorification of God and guns, that incites the hatred of Muslims, that sees wealth and power as signs of God's blessings. Kayla's understanding of God and her way of practicing Christianity are much-needed antidotes to these aberrations.

Kayla's Christian faith, I think, speaks to generations of people disaffected by Christianity, who are wearied by the unseemly connections between religion and politics and are even wearier of the narrow, divisive understanding of God peddled by so many churches.

This week, many people have been inspired by Kayla's work and her courage. But I hope they will also be inspired by her words, which reveal a radical encounter with a suffering God. I hope they will be moved by the profound spirituality of this young woman, whose extraordinary deeds arose out of her longing to see the face of God in the eyes of the most marginalized in our world.

In his own words: President Obama on faith

We, too, sing America: The Catholic church and the Museum of African American History and Culture