Skip to main content
This story appears in the Francis: The Environment Encyclical feature series. View the full series. 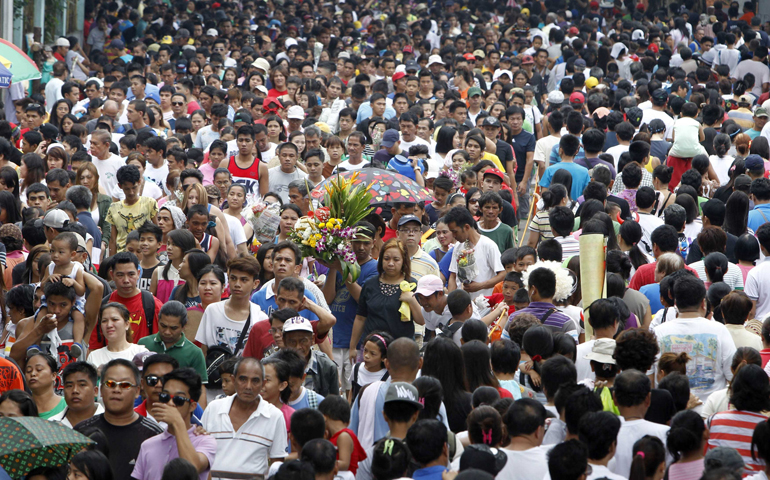 Filipinos walk to a public cemetery on Nov. 1, 2013, to remember their departed loved ones on All Saints' Day. (CNS/Reuters/Romeo Ranoco)

It's been nearly a week since the much-anticipated release of Pope Francis' encyclical on the environment. Since then, the document's many beautiful and challenging elements have been justifiably lauded in both the religious and secular media.

His call to replace fossil fuels is bold, his understanding of overconsumption and scarcity is prophetic, his compassion for the earth and all of its creatures is stunning. I could go on, but so many other commentators and theologians have done the work of parsing and praising the document so well that I will focus on an issue that remains woefully underdeveloped in the encyclical: overpopulation.

I say "woefully" because few people who are as concerned about ecological destruction as Francis is would deny that overpopulation is one of greatest threats to the earth's survival.

In 2012, the United Nations issued a special report on the looming crisis. By 2040, the global population is expected to swell from 7 billion to 9 billion. The U.N. estimates that by 2030, the world will need at least 50 percent more food, 45 percent more energy and 30 percent more water.

If the global community fails to stabilize population growth, the report said, we risk condemning 3 billion people to extreme deprivation.

But the pope, who has made caring for the poor the central theme of his papacy, doesn't seem ready to use the term "overpopulation."

In section 50 of his new encyclical, he instead refers to the crisis as an "unequal distribution of the population." Though Francis acknowledges that "an unequal distribution of the population and of available resources creates obstacles to development and a sustainable use of the environment," he insists that rising population "is fully compatible with an integral and shared development."

Francis recognizes that "imbalances in population density" can lead to "problems linked to environmental pollution, transport, waste treatment, loss of resources and quality of life."

Nevertheless, he argues that the world doesn't need a lower birth rate -- it just needs to distribute its food better.

"To blame population growth instead of extreme and selective consumerism on the part of some," he writes, "is one way of refusing to face the issues."

Yet it could be argued just as forcefully that the hierarchy is refusing to face an issue, too. Namely, that populations are swelling in the poorest areas of the world -- places where women have the least access to contraception.

According to the Bill and Melinda Gates Foundation, more than 220 million women in developing countries "lack access to contraceptives and voluntary family planning information and services. ... In 2012, an estimated 80 million women in developing countries had an unintended pregnancy; of those women, at least one in four resorted to an unsafe abortion."

In some of these countries, the lack of access to birth control can be traced directly to the Roman Catholic church. In the Philippines, for example, where the population is expected to swell from 100 million to 200 million by 2080, the hierarchy spent 15 years fighting the Reproductive Health Bill, which promised to give poor women access to family planning methods like intrauterine devices and the birth control pill. Sections of the bill finally passed into law last year. (Watch this recent report on "Religion and Ethics Newsweekly" to see the plight of poor Filipino mothers and the impact of the new law.)

Rather than acknowledging the ways in which access to contraception has alleviated both poverty and ecological stress in countries like Thailand, Francis instead criticizes wealthier countries that "make economic assistance contingent on certain policies of 'reproductive health.' " (Note the dubious quotation marks he places around the phrase.)

Throughout the encyclical, the pope calls on those with financial and political influence to take responsibility for protecting the environment. "What would induce anyone, at this stage, to hold on to power only to be remembered for their inability to take action when it was urgent and necessary to do so?" Francis asks.

It is a question that also needs to be asked of the church's hierarchy, whose financial and political power rivals most global institutions: How has the Vatican's rigid refusal to change its teaching on contraception kept it from taking urgent action to spare both the poor and our beleaguered planet?

Francis wants the whole human community to be accountable for the state of our environment. But that call must include the Vatican, too. How has the Roman Catholic church's ban on contraception deepened environmental degradation? How has the church's paternalistic need for power over the sexualities of its flock exacerbated the conditions of the poor?

Pope Francis wouldn't be breaking radically new ground by changing the church's teaching on birth control. The foundation for such a change was already put in place 50 years ago by the birth control commission.

Back in 1965, the commission, which was appointed by John XXIII and expanded by Paul VI, voted overwhelmingly to rescind the ban on artificial contraception. But Paul VI refused to accept the commission's findings, despite the fact that 30 of its 35 lay members, 15 of its 19 theologians, and nine of its 12 bishops voted in favor of changing the teaching. The pope instead sided with those who dissented from the commission's findings.

According to a report written by those dissenters (known as the "minority report"), "The Church cannot change her answer because this answer is true. ... It is true because the Catholic Church, instituted by Christ ... could not have so wrongly erred during all those centuries of its history."

For the sake of the earth and of the poor, it is time for the church to admit that the ban on artificial contraception is doing far more harm than good.

Western Catholics refused to receive the church's teaching on contraception decades ago, and increasingly, women and men in developing countries are also rejecting the teaching. In the Philippines, a country known for its deep Catholic faith, 84 percent believe that the government should provide free access to contraceptives.

Women and families want access to contraception because they believe their children's quality of life is far more important than their number of children. They are exercising their individual consciences and in doing so are lifting themselves out of poverty while also being accountable to the needs of our ecosystem.

Francis is right: A redistribution of food and a radical change in consumerist mentality are essential to feeding the soaring populations of developing countries. But these are long-range goals. Increasing access to family planning education and contraceptives can happen relatively quickly and will have a high impact on those who suffer the worst deprivation in our world.