Skip to main content
This story appears in the World Meeting of Families feature series. View the full series. 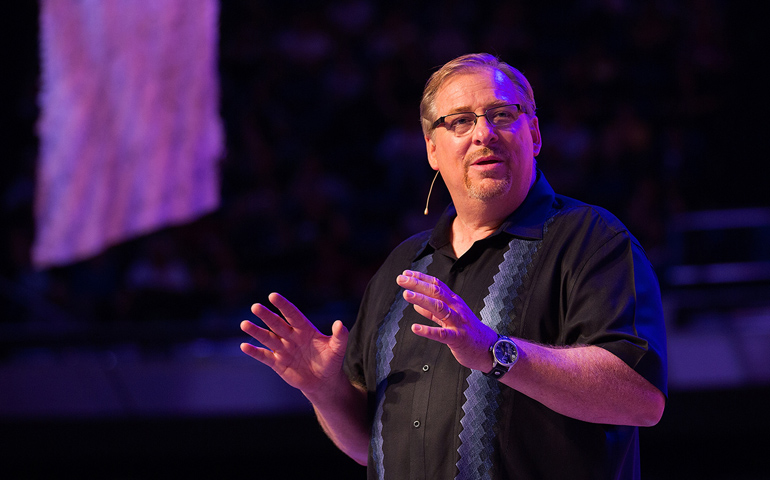 When the World Meeting of Families announced its roster of speakers for its September meeting in Philadelphia, some were surprised to see Rick Warren's name among the invitees.

Warren is one of the leading Christian evangelical voices in the United States, and the World Meeting of Families, which is sponsored by the Holy See's Pontifical Council for the Family, is the world's largest Catholic gathering of families.

Warren will join Cardinal Sean O'Malley in offering a shared keynote address titled "The Joy of the Gospel of Life."

Of course, this isn't Warren's first turn on a Vatican-sponsored stage. Back in November, he was invited to address the "Biblical Meaning of Marriage" at the Vatican's Complementarity of Man and Woman: An International Colloquium. (A photo of Francis and Warren shaking hands at the conference is still circulating on the Internet.)

When Warren defended the "one man, one woman" definition of marriage at the conference, Irish Independent columnist David Quinn tweeted, "Probably the first time ever the synod hall resembled a revivalist meeting!"

Austen Ivereigh also commented on Warren's reception inside the Vatican, tweeting, "Standing ovation for @RickWarren. Quite a preacher."

Warren wasn't the sole evangelical from the United States speaking at the conference. He was joined by Russell Moore, president of the Southern Baptist Ethics & Religious Liberty Commission.

And sitting among the participants of the conference was Tony Perkins, president of the Family Research Council, a group whose anti-LGBT rhetoric is so false that the Southern Poverty Law Center has labeled it a "hate group." To the Vatican's credit, Perkins wasn't asked to speak, but he was invited to observe. (That didn't stop the National Review from getting Perkins' take on the event.)

This isn't Pope Francis' first encounter with conservative evangelical Christians. Back in March 2013, I reported on Cardinal Jorge Bergoglio's popularity among Argentine evangelicals.

The day after his election, a headline at Christianity Today, a conservative Christian magazine, declared, "Argentine Evangelicals Say Bergoglio as Pope Francis is 'Answer to our Prayers.' "

The article wrote, "Relations between evangelicals and Catholics are much better in Argentina than in other Latin American nations. ... Bergoglio has played a central role in Argentina's CRECES (Renewal Communion of Catholics and Evangelicals in the Holy Spirit) movement over the past 10 years." It also recounted Bergoglio's deep support for the Argentine Bible Society.

A second Christianity Today article posted the day after Francis' election offered an interview with Luis Palau, a leading evangelical preacher who immigrated to the United States from Argentina 50 years ago.

Palau detailed his longstanding friendship with Bergoglio, saying, "With the evangelical community, it was a very big day when we realized that he really was open, that he has great respect for Bible-believing Christians, and that he basically sides with them."

Nearly two and a half years into his pontificate, Francis continues embrace evangelicals, particularly those from the United States. In March 2014, he welcomed the Green family, the "Oklahoma billionaires whose company, Hobby Lobby, took their challenge to Obama's contraception mandate to the Supreme Court last week."

And in June 2014, he even met with televangelist Joel Osteen.

According to Religion News Service, Osteen "was part of a larger gathering coordinated by the International Foundation, also known as 'the Fellowship.' Osteen was joined by Utah Sen. Mike Lee, a Mormon; California pastor Tim Timmons; and Gayle D. Beebe, president of evangelical Westmont College."

Francis continued to welcome U.S.-based evangelicals later that month. On June 24, 2014, in a meeting that RNS said "leaned particularly toward charismatic Christianity," the pope met with "Anthony Palmer, a bishop and international ecumenical officer with the independent Communion of Evangelical Episcopal Churches; Geoff Tunnicliffe, the outgoing head of the Worldwide Evangelical Alliance; and John and Carol Arnott of Catch the Fire Toronto, which grew out of a Pentecostal revival 20 years ago."

If you think these meetings took place during large audiences, think again. The RNS story includes a photo of Pope Francis giving a high-five to Texas televangelist James Robison as they share a meal, while fellow Texas televangelist Kenneth Copeland was photographed praying over the pope.

While it is true that evangelicals and Catholics share a fundamental belief that Jesus is the son of God, their theological ties do not run deep and their traditions differ starkly. They are, of course, currently united in a common mission, which they would call "the protection of the family" or "the defense of traditional marriage."

If there is a set of convictions that Pope Francis and U.S. evangelicals share fervently, it could be summed up like this: Marriage is between one man and one woman, children must have a mother and a father, and strict gender roles are part of the divine plan for humanity.

A quick glance at the list of workshops at the World Meeting of Families makes it clear that these ideas will dominate the conference. (Sessions on "traditional" marriage, complementarity, religious freedom, and mandatory celibacy for gays and lesbians are abundant.)

Given the Vatican's many friendships with wealthy evangelical powerbrokers and given the urgency of their shared cause, it's a wonder Rick Warren was the only evangelical asked to address the meeting.