Skip to main content
This story appears in the The Living School feature series. View the full series. 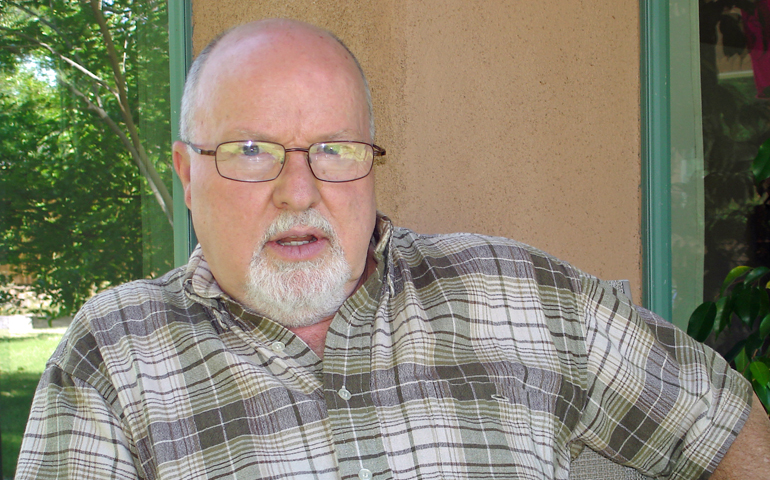 On a recent trip to Albuquerque, N.M., I had the opportunity to visit the Center for Action and Contemplation. The center was founded almost 25 years ago by Franciscan Fr. Richard Rohr to provide educational materials, events and curriculum bearing witness to the Christian tradition of contemplative practice and compassionate action.

During my visit, I had the chance to sit down with Father Richard and other staff members of the CAC to discuss the opening of their latest program, called the Living School for Action and Contemplation. In part one, I offer the highlights of my interview with Father Richard. Next week, in part two, I will present a larger story on the Living School and other new developments at the CAC.

Manson: You've said you will stop traveling for speaking engagements beginning in March. What is the story behind your decision?

Rohr: I decided years ago, in conversation with my Franciscan superior and members of the CAC staff, that if I'm going to keep teaching contemplation, then the last years of my life should be contemplative. The most un-contemplative part of my life is getting on airplanes and flying all over the world. I love it once I reach my destination because I meet the most wonderful people on this earth. But after 42 years of itinerant ministry, I had to accept that I shouldn't take myself so seriously and that I do not need to save the world.

Also, the other key part of the mission at CAC is social justice, so I've had to look at the carbon footprint I'm creating with all of this traveling. So I set a demarcation line and decided that if I made it to 70 years of age, I would stop traveling for conferences and speaking engagements. I turn 70 in March and, so far, it looks like I'm going to make it!

So it's not that I'm retiring. If God continues to give me health and a sane mind and verbal ability, I want to teach. Of course, I'll travel from time to time to visit friends and family, but after March, I will teach only in New Mexico.

How will your outreach ministry change when you get off the road?

I've had an extraordinary opportunity to communicate both nationally and internationally, which really started in earnest in 1973 with the cassette recordings of my talks. Then came the CD sets, and then I started writing books. Now we have the immense success of the webcasts. People from as far away as Denmark, South Africa, Cambodia and Venezuela log in to hear me talk in this room. It's just astounding. I've often wondered what would have happened if Jesus or Paul had the opportunities to communicate the way we do today.

The biggest change in our outreach efforts will come later this year with the opening of the Living School for Action and Contemplation, which really is the fulfillment of a longtime dream of mine.

How did such a big dream like the Living School end up becoming a reality?

A year and a half ago, Alicia Johnson joined the staff as executive director of the CAC. She not only has a remarkable mind, but also an extraordinary background in academia and business. And she really understands the vision of CAC. It astounds me what she can hold together.

When she started here, I told her about my plan to get off the road. She asked me to do two things. First, to list on paper where, I believe, I get the authority to say the things I say. In other words, she was asking me to reflect on my lineage, which is a word we're borrowing from the Buddhist tradition. As a Catholic, lineage is important. Of course, we would call it tradition. It's how we know that our ideas are not simply our own, but are other peoples' ideas, too. They are part of the collective unconscious or the big spirit. I realized there are 15 building blocks that I rely on in the lineage of wisdom that has formed my own thinking and living. We've listed these 15 key sources on the CAC website, and visitors can click on each point and hear me offer a brief synopsis.

And what was the second task Alicia asked you to do?

After I did that, she asked me to distill my lineage a little more and discover its underlying themes. I talk about so many different subjects, from the Enneagram to social justice to sexuality. Sometimes I feel like I'm jack-of-all-trades and master of none! That's not false humility. I really had to ask myself, why do people trust me? I think because my gift is to synthesize different fields: philosophy, theology, sociology, anthropology, psychology. I'm not an expert in any of them, but I've done my homework in terms of reading the people who are experts. And as I read, the lights start going off about how things connect to one another.

All of these disciplines have contributed to, what I discovered, are seven underlying themes that have developed over my career and my ongoing contemplation. These themes are also online, and each one links to an audio file in which I discuss them in some more detail.

How did all of these discoveries impact the development of the Living School?

After I told Alicia about these key sources and underlying themes, she said to me, "We've got the curriculum for a school." She'd noticed I had been using the phrase "a living school" even before I realized we were developing a school. I used the term because I was envisioning a program emphasizing praxis and orthopraxy just as much as orthodoxy. So the "Living School for Action and Contemplation" became the name, and it really caught on among the staff here.

"Orthodoxy" is frequently invoked among more religiously conservative, particularly Roman Catholics. How do you understand the word?

Even though "orthodoxy" isn't found in the Bible, as a believer, I understand that there is mainline tradition of verbal orthodoxy. I respect it because I've been trained in it. But I'm unimpressed by it. I'm not trying to be cynical or unfair, but those who are most insistent on orthodoxy to the tradition often seem to understand it the least. They call the last 500 years the tradition. They seem to know little about the fathers of the church or the intertestamental period, or the Jewish tradition, or the Desert Mother and Fathers, which is all part of the tradition, too.

This is why it is so important to balance orthodoxy with orthopraxy. St. Thomas Aquinas said, "Life itself is prior to doctrine." It's an idea that really speaks to what we call the "Franciscan alternative orthodoxy," which says that lifestyle and practice are much more important than mere verbal orthodoxy.

Does the response to the Living School seem to suggest that your approach is resonating with people?

Well, first, the donations have come to this like nothing else we've ever done. Second, more than 1,600 people have asked for an application, and almost 700 ended up applying. Now this is a 23-page application, and it is quite daunting to fill out. But having so many applicants is a good problem to have because we want to have a nice balance of younger and older, Protestant and Catholic, American and international, gay, lesbian and straight. Now we've got the pool to choose from to make that happen.

What does the response tell you about the spiritual hunger out there?

This all tells me that people want something substantial. They realize that the weekend conference is a shot in the arm. But there is no solidifying carry-through or follow-up, just the high you sometimes get from a weekend conference. Somehow the metaphor of school is exciting far more people.

What are your hopes for the Living School?

Our deepest hope for the Living School is that students will emerge ready to live out their own soul task at home, in their places of work, and in all of their relationships. We hope that through education and contemplation, they can further develop their own spirits of collaboration, compassion and joy, and engage themselves more deeply in social action for our suffering world.