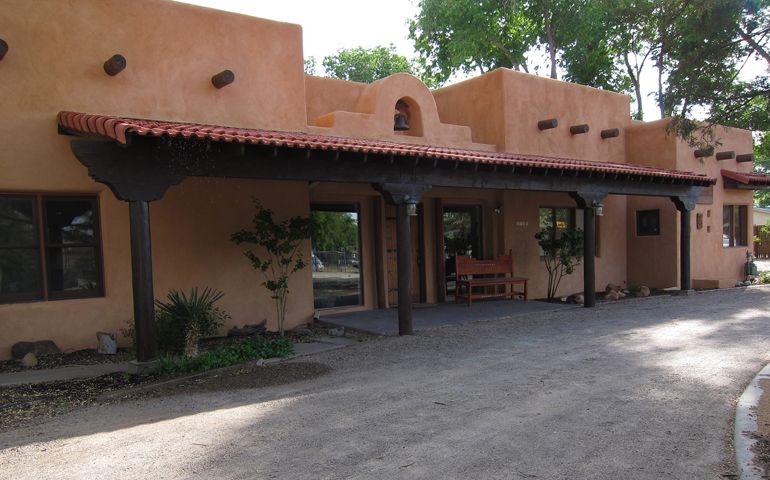 Visitors to the Center for Action and Contemplation are welcomed by the warm adobe buildings that date back more than a century. (David S McKee)
This article appears in the The Living School feature series. View the full series.

In last week's column, I offered an interview with Franciscan Fr. Richard Rohr, founder of the Center for Action and Contemplation in Albuquerque, N.M. Rohr and I discussed the center's new program, the Living School, and his decision to get "off the road." This week, in part two of a three-part series, I offer a fuller story on the Living School and its inaugural class. In the final installment next week, I will look at the latest transformation of the CAC buildings and publications and will explore the ongoing development the larger CAC program called "The Rohr Institute."

Suede shoes seemed like a safe bet for an October morning in arid Albuquerque.

That was until I stepped into a large puddle in the grassy courtyard of the Center for Action and Contemplation. What looked like typical parched land in the CAC's courtyard an hour earlier had transformed into something resembling a pond.

"Ah, they're flooding!" Franciscan Fr. Richard Rohr says to me with delight as we emerge from our interview. Rohr's beloved black Labrador, Venus, and I navigate warily around the deep puddles.

Both Rohr and Venus take me to meet Alicia Johnson, the executive director of the CAC, who offers me a lesson on what I had just stepped in: the acequia system.

For hundreds of years, an intricate series of ditches that connect to the Rio Grande have been used for irrigation. "Throughout the growing season, 'ditch masters' will open up the gates and flood neighborhoods, especially in the south valley, which historically has been mostly farmland," Johnson explains.

Although the Native Americans likely dug the first canals as early as 800 A.D., the system was further developed and formalized by the Spanish the 1700s.

As one who loves all things New Mexican, I can't get enough of this kind of history. But I also find in it an apt metaphor for Rohr's vision for Living School: taking what is most life-giving and enduring in a tradition, and using it to help cultivate the knowledge, compassion and contemplative practice of new generations.

"Richard has always been a traditionalist," Johnson says. "When we looked at the wisdom lineage that he was standing on, we recognized in a very real way that through this school, we would be rescuing parts of traditional Christianity -- especially the parts that get put under the rug."

Johnson, who came to the center almost two years ago, says her graduate studies in 20th-century rhetoric helped to clarify her image of the Living School.

"The purpose of a rhetorician is to watch for the marginal things that disappear," she says.

The idea to create the Living School came early in Johnson's tenure at the CAC.

"Richard asked me to come to his hermitage so we could get to know one another better. He told me about his plan to stop traveling when he turned 70 in March 2013," she recalls. "When I asked him what his dream for the CAC was, he said, 'I've always wanted a school.' "

Johnson, it seems, is the ideal person to help Rohr realize this dream. A Minnesota native, she has ample expertise in business and academic administration, serving previously as the director of continuing education at the University of Minnesota College of Veterinary Medicine and as the Schwan's Endowed Chair in Business at Southwest Minnesota State University.

She also has a passion for Rohr's work. Raised Catholic, Johnson became interested in spirituality early in her young adulthood. Her studies of the work of James Finley eventually lead her to Rohr's work a decade ago.

"It's that 'network effect' that Richard causes," she says. "You read one book, and then the next decade of your life is spent reading hundreds more."

Although leaving Minnesota was a hard decision for Johnson, she says the position kept "spiritually bugging her" to take it. Finally, she surrendered to the call to begin a new life in Albuquerque with her family.

"I realized that if I really want Richard's work to grow, this must be what I'm supposed to do," she says.

Figuring out that developing a school was the best way to perpetuate Rohr's work "was actually easy and obvious," Johnson says. "You can always trust writers to know why they are writing."

When she asked Rohr to write down the key themes of the wisdom traditions that have most influenced him, Johnson saw in his lineage the building blocks for a curriculum. "At this point in his life, Richard was able to reveal something he couldn't have 20 years ago."

The Living School's mission to rescue a vital part of the Christian mystical traditions has spoken to many "Living Stones," or those who contribute financially to the school.

"We're not funded by anything but our own earned income and donations," Johnson explains. "A growing crowd is asking us to do this. They love Richard's work and they want to ensure that all that he has done is not lost on the next generation."

The response to Living School's program seems to suggest that all will certainly not be lost.

More than 1,500 people requested applications, and almost 700 applications were submitted. A team of CAC staff and outside readers reviewed each 25-page application. Applicants had to commit to at least 35 hours a month of coursework, which involves not only reading but contemplation, experiential practices and service. The Living School staff anticipates welcoming a new cohort of 150 to 180 students each year for at least the next three years.

Those accepted into the program must also come to the CAC for one small-group intensive session and attend three symposia with all Living School students over the course of three years. Because of space limitations at the CAC, the symposia will be held at the Hyatt Regency Tamaya Resort and Spa on the Santa Ana Pueblo just outside of Albuquerque. Books, supplies, and travel and lodging expenses are not included in tuition, which is $3,600 for the two-year program.

Among the applicants, 75 percent were Christian, with half identifying as Catholic and the other identifying as members of a mainline Protestant denomination. Evangelicals and nonaffiliated Christians made up 20 percent of the group, and 5 percent either were from a non-Christian tradition or declined to label their religious affiliation.

"Though there isn't a presupposition that students must come from a particular religious background, this is not an interspiritual program," explains Matt Sholler, who serves as the Living School's associate director.

The demographics of the first cohort of students suggest that while it is a predominately Christian group, it is also richly intergenerational, with an age range of 25 to 90 years old. Although half of those accepted are in their 50s and 60s, "there is a significant cluster of students in their 30s and 40s, which is exciting," Sholler says.

Perhaps most interesting, the applicant pool was not made up of mostly armchair theologians and ministry-types. The occupations held by prospective students ran the gamut: clergypersons and bishops, artists and educators, doctors and first responders, nurses and scientists, lawyers and small-business owners.

For Johnson, this diversity of careers demonstrates the trust students have in Rohr and those developing the Living School curriculum: "We're getting so many applications from people who aren't typically in a place where they aren't totally in charge."

Rohr will serve as academic dean of the Living School, and he and two of his frequent collaborators, Finley and Cynthia Bourgeault, will serve as core faculty members through 2015. Finley and Bourgeault are both sought-after retreat leaders known for their writing on the contemplative life. They will be joined by least seven "master teachers," among them biblical scholar Walter Brueggemann and theologian and Franciscan Sr. Ilia Delio.

Core faculty members and master teachers were chosen not simply because of their expertise in a field, but for their ability to synthesize various disciplines.

"The people we chose are not just great teachers; they are making new knowledge in their time. They are people who take the work forward," Johnson says. "This isn't an adult education program; it really is a school of thought."

And it is a school of thought where both the teachers and the CAC staff are not unlike the ditch masters who have flooded the land in and around the CAC for centuries. Like those who manage the Rio Grande's canals, they are taking a traditional system of vast conduits of wisdom and opening up the floodgates so the new life of deeper knowledge and richer practices will continue to grow for generations to come.

Part three of this series will appear next week.

Richard Rohr on the Living School and getting off the road

Evangelizing the institutional church: an interview with Helmut Schüller