'Selma' captures the true experience of a prophet 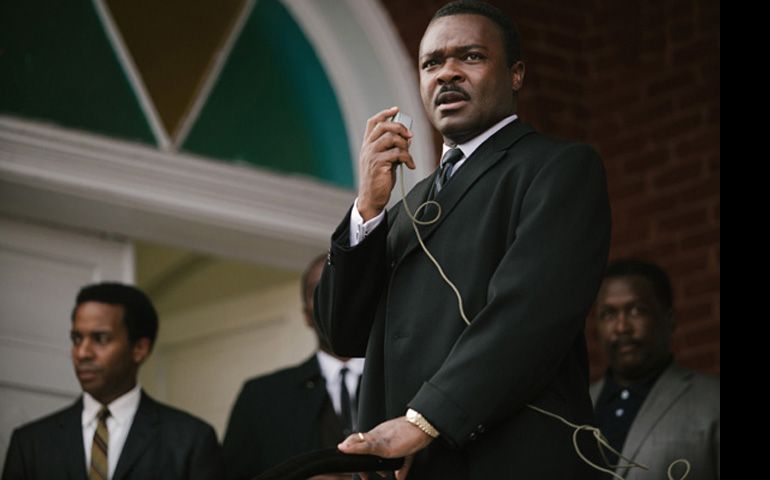 It seems like controversy has swirled around "Selma" since the film appeared in theaters on Christmas Day.

First, there was the protest of Joseph Califano Jr., a former aide to President Lyndon Johnson. He charged that the film's director, Ava DuVernay, mischaracterized Johnson as unsupportive of the movement for voting rights for black people in the South.

If DuVernay did in fact fictionalize some details for the sake of narrative tension and flow, she is in good company with the other directors of the most celebrated films of the year. Clint Eastwood took liberties with Chris Kyle in "American Sniper," and Morten Tyldum fictionalized multiple aspects of "The Imitation Game."

The only difference, it seems, is that Eastwood and Tyldum will compete for Oscar gold this weekend. DuVernay was shut out of the nominations, as was David Oyelowo's remarkable performance in the role of the Rev. Martin Luther King Jr.

Although "Selma" will compete for best picture on Sunday, the snubbing of DuVernay and Oyelowo generated the film's other big controversy. While Johnson's legacy will not suffer because of "Selma," one hopes that the Academy's lousy decision to overlook these two giant talents will not impact the film's legacy, either.

"Selma" captures key elements of the civil rights movement so vividly and artistically, it should be shown in classrooms and advocacy groups for years to come.

It should also be mandatory viewing in religious communities. "Selma" may be one of the best depictions of the prophetic vocation ever captured in a feature film.

My own understanding of the prophet was shaped by one of King's closest associates, the Rev. Dr. Joseph Lowery. Lowery is often called the "dean of the civil rights movement" because of his part in founding the Southern Christian Leadership Conference (SCLC) and his pivotal role in the Selma march.

When I was student at Yale Divinity School, Lowery came to campus to deliver our annual Parks-King Lecture. I was young and not nearly educated enough about the history of the civil rights movement. So I was a bit taken aback when I heard Lowery open up the Parks-King Lecture by insisting that we broaden our focus beyond Rosa Parks and King.

Paraphrasing the aphorism "change does not come in a vacuum," Lowery said Parks and King did not come in a vacuum, either. They did not create the civil rights movement, and they were not the center of the movement. It was the energy and support of the people and their efforts to organize and strategize that formed the soul of the struggle for civil rights. It was the communities that surrounded Parks and King, Lowery told us, that made their work and their witness possible.

Lowery knew of what he spoke. He was a key organizer of the Montgomery, Ala., bus boycotts after the arrest of Parks in 1955. And after the Selma march in 1965, King tasked him with the unenviable job of leading a delegation to take voting rights demands to Alabama Gov. George Wallace. The governor refused to receive him. But days later, he met with Lowery and the delegation for a historic 90 minutes.

Though Lowery is not portrayed in "Selma" (he was an honored guest at the premiere), it is clear that somewhere in her creative process, DuVernay heard the same message given to us divinity students. And she drives home the point by entitling her film "Selma" rather than "King."

" 'Selma' is not King's only story," DuVernay told "PBS NewsHour" in a recent interview. "I felt very, very adamant about the fact that this film be broadened to include the community of people who came together to make this so."

King is rarely alone is this film. Bayard Rustin and Andrew Young accompany him on White House visits. He drives with members of the SCLC to Selma to see whether it is the right location for their next action. In Selma, he encounters leaders who had been doing the movement's groundwork for years: Amelia Boynton, James Bevel, James Forman and John Lewis. All of the characters participate in arguments and power struggles and all-night strategy meetings.

"There were a bunch of different organizations, personalities, people, ideas about how to get there, how to keep their eyes on the prize," DuVernay told "Newshour." "But they did. And they were able to come together around this one voice that amplified the message."

DuVernay's insight did not elude New York Times critic A.O. Scott, who praised the movie for depicting King as "one of many heroes."

"Dr. King worked in the service of the movement, not the other way around," Scott writes in his review of "Selma," "and Mr. Oyelowo's quiet, attentive, reflective presence upholds this democratic principle by illuminating the contributions of those around him. I have rarely seen a historical film that felt so populous and full of life, so alert to the tendrils of narrative that spread beyond the frame."

King's singular gifts with words, his deep faith, and his radical commitment to justice and nonviolence offered the ideal amplification of the message. But DuVernay also seems aware that even the most charismatic of prophets suffer uncertainty and burnout. In these moments, the prophetic community again plays a critical role.

At several junctures in the film, King describes himself as tired. After an argument with his wife, Coretta, over the most recent threats of violence against their children and the "fog of death" that hangs over their family, King makes a late-night phone call to singer Mahalia Jackson.

"I need to hear the Lord's voice," he says wearily into the phone. As King sinks against his kitchen wall, Jackson sings, "Take My Hand, Precious Lord" over the line.

Later, when King and his closest friend Ralph Abernathy sit together in jail, King suffers doubt over whether the civil rights movement can truly deliver black men and women from the layers of poverty and lack of education that keep them from true advancement. Abernathy counsels King, quoting Matthew 6:26: "Look at the birds of the air: they neither sow nor reap nor gather into barns, and yet your heavenly Father feeds them. Are you not of more value than they?"

When worry seizes King again after the Bloody Sunday beatings on the Edmund Pettus Bridge, after the first attempted Selma march, he takes young John Lewis on late-night car ride. Lewis, suffering with a skull fracture, refuses to let King be consumed by doubt. He reminds King of his own words, spoken years earlier in a church, that convinced Lewis (also consumed with discouragement at the time) to join the Freedom Rides. King, it seems, looked to the younger members of the movement for reassurance and encouragement, too.

One of the other gifts of "Selma" is DuVernay's spotlight on the women in the movement, including Diane Nash, Annie Lee Cooper and Boynton. In a poignant scene, Coretta King asks Boynton about the source of her own strength and fortitude. Boynton offers a reflection on the rich history of the African people and their survival in the face of colossal abuse and injustice.

"The ancestors have prepared you. You are already prepared," she tells Coretta.

"Selma" is not only an important film for the black community; it is vital to anyone who participates in a prophetic movement for justice, reform and equality.

There are many lessons here, but one in particular stays with me. We must support the prophets in our midst and be aware that their journey, like ours, can be lonely, tiring and discouraging. And even if we are not the one chosen or gifted enough to amplify the message, our role in the struggle for justice is no less crucial. Like change, prophets do not arise in a vacuum. Prophetic individuals are only as strong and effective as the prophetic communities who surround them.

Culture | 'Selma' captures the true experience of a prophet