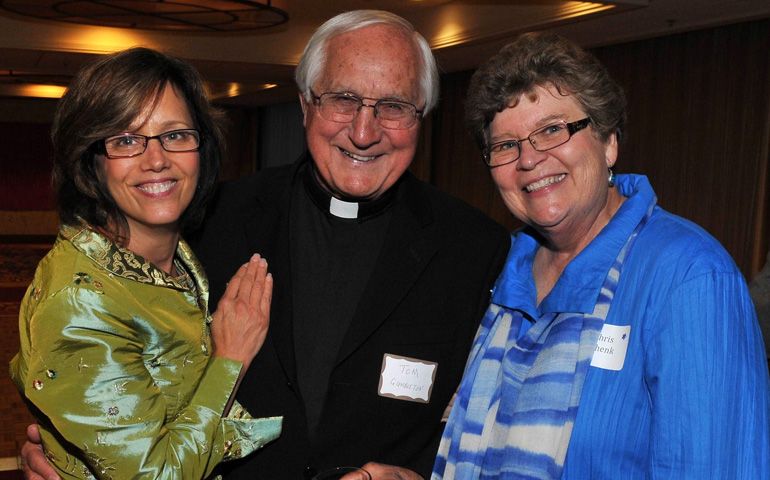 Cleveland — On the evening of Oct. 4, supporters and board members of the Catholic reform group FutureChurch gathered here to honor the work and celebrate the departure of their founding executive director, Sr. Christine Schenk.

A member of the Congregation of St. Joseph, Schenk has spent the last 23 years at the helm of the Cleveland-based organization, which has dedicated the bulk of its time and resources to developing strategies for keeping vibrant parishes open in a time of fewer priests, calling for open and collaborative structures for Catholic governance, and advocating for the full inclusion of women and married men in church leadership.

For Schenk and members of FutureChurch, all of these struggles for church justice have been rooted in one crucial belief: All Catholics should have regular access to the Eucharist, the center of Catholic life and worship.

In August 2011, Schenk discerned that it was time for FutureChurch to find fresh leadership and told the board of her intention to leave in the fall of 2013.

"I believe the time is now ripe for that transition to occur. We have a strong national board, a great staff, our finances are stable and we are experiencing significant success in our programmatic endeavors," Schenk told supporters.

FutureChurch members from as far away as New York and California gathered in Cleveland for a two-day meeting, including the evening's reception in which Schenk was given FutureChurch's Trivison* Award.

The honor is named after the late Fr. Louis J. Trivison, or "Father Louie" to longtime FutureChurch members, a co-founder and spiritual father of the organization.

A priest who served both before and after the Second Vatican Council, Trivison often reminded FutureChurch supporters that just six years after Pope Pius XII solemnly declared "the Mass will always in be Latin," Pope John XXIII approved Mass in the vernacular.

To honor his memory, the Trivison Award is offered to those who exhibit outstanding leadership in advancing the FutureChurch mission and vision.

In her acceptance speech, Schenk offered her gratitude to the leadership team of the Congregation of St. Joseph who "stood in the breach" with her as FutureChurch endured criticism from bishops.

"They weren't exactly pleased with a nun like me leading a group like FutureChurch as we vigorously supported the fundamental rights of the laity to defend their viable parish homes and make their views known about the centrality of the Eucharist, optional celibacy and the systemic inequality of women in the Church," Schenk told the audience.

Although FutureChurch has always taken a multifaceted approach to advocacy by organizing conferences, making statements to the media, and joining public witnesses and petition drives, its greatest contribution to the church justice movement has been through education.

Browsing through the organization's website, one can access guidelines for how to celebrate a liturgy in honor of Mary Magdalene; crisis kits for parishes unexpectedly faced with closing or merging; or a packet called "Celebrating Women Witnesses," which includes biographies and prayer services in honor of Catholic women who throughout history defied unjust patriarchal structures in service of the Gospel.

Those with more financial resources can sign up for one of FutureChurch's annual pilgrimages to archaeological sites of women leaders in the early church, which are held in Rome and nearby Ostia. This year's pilgrimage took place during the papal election, which Schenk calls a "blessed coincidence."

Schenk says she will never forget standing in St. Peter's Square the moment Pope Francis first emerged and asked for the blessing of the People of God. "He acknowledged the mutual grace and giftedness of the People of God along with that of the hierarchy."

Schenk will spend at least the next few years putting her time and energy into writing a book that compiles all that she has learned, through FutureChurch pilgrimages and her own research, about the full participation of women leaders in the early church.

Years before Schenk came to FutureChurch, she spent 18 years supporting women and families as a nurse midwife. At the celebration, she told the crowd of supporters and board members that she has thought of her time at FutureChurch as a kind of "spiritual midwifery"; that is, "supporting and encouraging the energies already present in the people of God, laboring to birth the fullness of the Vatican II vision."

"Just as in real life, there comes a time for midwives for change shift," Schenk said.

The FutureChurch board has chosen Deborah Rose-Milavec to take over the position, and supporters had the chance to meet their new executive director at last weekend's event.

Rose-Milavec's resume demonstrates a career spent among some of the most vulnerable in our society. She has directed programs and campaigns related to domestic violence, at-risk youth, humanitarian aid, war and peace, and the environment.

She holds a holds a master's degree in theology and, most recently, she served as program director and vice president of Catherine of Siena Virtual College, an online school dedicated to teaching women and men about gender inequity in church and society with a special outreach to Africa, China, India, the Philippines, Thailand and Latin America.

Schenk says she was energized by the fact that the end of her tenure was highlighted by FutureChurch's participation in one of the most successful events in its 23-year history: the U.S. tour of Austrian Fr. Helmut Schüller.

The event was groundbreaking not simply for the tremendous turnout at each stop on the 15-city tour, but as a large-scale collaborative effort by a coalition of nine church reform groups.

In gratitude for her key role in organizing the tour, Schüller extended an invitation to both Schenk and Rose-Milavec to attend the first international meeting of reform-minded priests and laypeople, which will take place Oct. 10-12 in Austria, to further discuss the "Call to Disobedience."

Although Schenk and Rose-Milavec have been working side by side during this time of transition, the new executive director called the task of filling Schenk's shoes "awesome and humbling."

"The only sensible way to follow is to do what Chris did," Rose-Milavec says. "Walk humbly, discern prayerfully, and act fearlessly, trusting that God who inspired this work will help us to carry it forward."

*An earlier version of this column misspelled Trivison's last name.