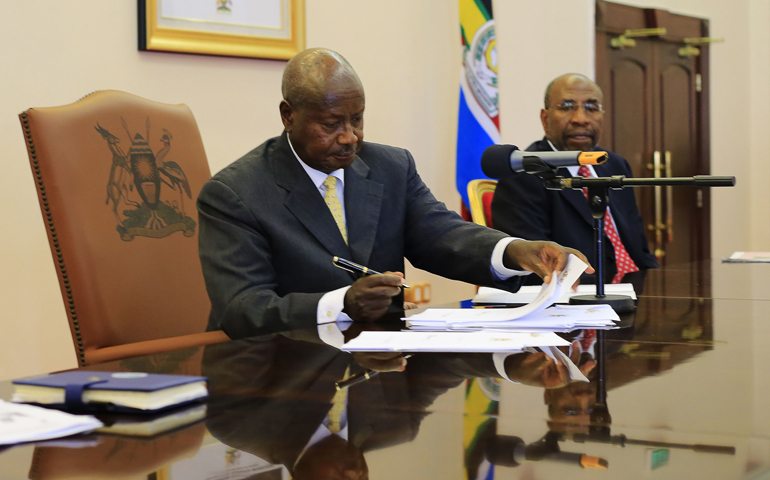 Back in late February, when Ugandan President Yoweri Museveni signed anti-homosexuality legislation into law, it wasn't clear how members of the country's Roman Catholic hierarchy would respond.

While it was already a crime to be gay in Uganda, the new law builds on previous penalties, including a possible life sentence for those found to be in same-sex relationships and those who have sex with either minors or people infected with HIV. First-time offenders would be subject to 14 years of imprisonment. Those who counsel or provide outreach to gay, lesbian, transgender or intersexual people will now be punished with a seven-year jail sentence.

When he signed the bill, Museveni charged that gays and lesbians were "mercenaries and prostitutes" who acted out same-sex behavior for pay.

"They are heterosexual people, but because of money they say they are homosexuals," he said in a speech.

The Ugandan Catholic hierarchy opposed the original 2009 draft of the bill because it proposed the death penalty for some same-sex acts. But once that provision was removed, they did not condemn it.

Last we heard from Ugandan bishops on March 4, they were reserving judgment on the law, claiming they needed time for an "educated study of it, so we can make an educated judgment," said Msgr. John Baptist Kauta, secretary-general of the Uganda Episcopal Conference.

Members of the Ugandan hierarchy continued to be tight-lipped about their position on the new legislation. That was until Monday, when, at a "thanksgiving" celebration for the new law held in Kampala, their actions spoke louder than words.

International media outlets reported that the thanksgiving rally and ceremony was organized by a nonspecific "coalition of religious leaders." But a photo in one of Uganda's major newspapers revealed that Archbishop Cyprian Kizito Lwanga of Kampala not only attended the thanksgiving celebration, he was part of a contingent of five clergymen (including a Muslim sheikh, a Pentecostal bishop and an Anglican bishop) who gave Museveni an engraved plaque to congratulate him for signing the bill.

A YouTube video also shows Lwanga offering prayers at the ceremony for those "led astray in this vice of homosexuality."

Speaking at the thanksgiving rally, Museveni declared that he was ready to mobilize against Western gays and lesbians who try to promote homosexuality in Africa. Although he portrayed Uganda's law as a defense against a new form of Western imperialism, it has been well-documented that it was U.S.-based evangelical groups who first lit the fires of religiously based, anti-gay sentiment in African countries like Uganda.

Museveni's speech, in fact, demonstrated that the public battle over homosexuality is new in his country, admitting that he only recently became aware of the issue.

"I didn't pay attention because I was involved in other sectors and little did I know it was a big issue," he said.

"I came to learn that homosexuality was unhealthy and this is because they go to a wrong address. Sexual organs of a human being are highly specialised," he said.

Museveni even said he delayed signing the bill because he "wanted to be convinced that homosexuality was not genetic but due to behavioral influence," according to the Daily Monitor.

"It is nurture, not nature," he said later in the speech.

An estimated 44 percent of Uganda is Catholic, which suggests that the Roman Catholic hierarchy holds significant influence over the beliefs of the people and the development of public policy. By offering public praise of Museveni's signing of this law, Lwanga has given his blessing to legislation that violates the Catechism of the Catholic Church, which teaches that homosexual orientation is not a choice and that gays and lesbians should not be subjected to violence or social discrimination.

The situation in Uganda mirrors recent developments in Nigeria where, in January, President Goodluck Jonathan enacted a law that mandated 14 years in jail for anyone entering a same-sex union and a 10-year sentence for "a person or group of persons who ... supports the registration, operation and sustenance of gay clubs, societies, organizations, processions or meetings."

Though the law ignited a steep rise in attacks on LGBT people in the country, Nigerian Catholic bishops applauded Jonathan's "courageous" decision and called his law "a clear indication of the ability of our great country to stand shoulders high in the protection of our Nigerian and African most valued cultures of the institution of marriage."

In other African countries, some members of the hierarchy have attempted to defend the basic human rights of gays and lesbians. An editorial in The Southern Cross, a newspaper run by the bishops of South Africa, Botswana and Swaziland, criticized Nigeria's law and encouraged African Catholics to "sound the alarm at the advance throughout Africa of draconian legislation aimed at criminalizing homosexuals." But the Vatican itself has remained silent.

In late January, a new movement called No More Triangle Nations was created to encourage Pope Francis to speak out against these laws. The initiative urges Twitter users to employ the hashtag #PopeSpeakOut to ask Pope Francis to condemn anti-LGBT legislation not only in Nigeria and Uganda, but Russia, Jamaica and India as well. New Ways Ministries and Call to Action are part of the coalition.

Anti-homosexuality legislation is quickly becoming a global threat to human dignity. These laws do not simply violate human rights; they foster a climate of rage, scapegoating, and violence against LGBT people.

This situation brings to the forefront the ongoing debate among progressive Catholics about the efficacy of the Pope Francis' kinder, gentler papacy. Some believe Francis' expressions of compassion will eventually lead to greater inclusion for LGBT Catholics while others argue that Francis' words are not substantive enough to amount to real change.

These repressive laws offer an opportunity for the pope's now-legendary "Who am I to judge?" comment to actually translate into action. No one is asking Pope Francis to change doctrine or create a revolution. We are only asking him to honor the catechism's teaching that gays and lesbians should be "accepted with respect, compassion, and sensitivity."

The global crisis of anti-homosexuality laws calls Pope Francis not only to uphold church doctrine, but to act on his own pastoral words -- words that have inspired many to believe that the Catholic church has entered a new era of justice and dignity for the LGBT community worldwide.