When does our hope for Francis become denial? 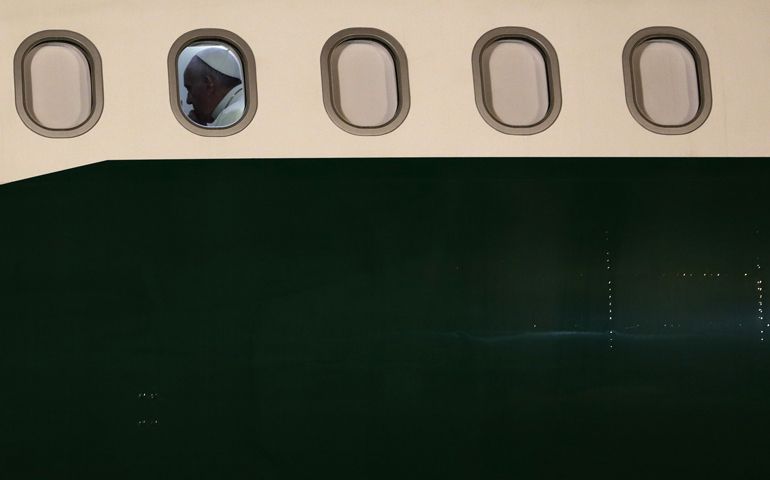 Pope Francis is seated at a window of his plane Sunday before it departs Rio de Janeiro. (CNS/Reuters/Ricardo Moraes)

Full disclosure: I do not feel excited or hopeful about what Pope Francis said about women and gay priests during his epic press conference on the way home to Rome.

Now, wait. Before you click me off as a hater or an incorrigible pessimist or an angry feminist lesbian or another choice label, please understand this: I don't dislike Pope Francis.

I think he has an authentic warmth. I appreciate his desire to be among the people. I laugh at some of his jokes, and there are themes in his sermons that genuinely move me. I share his desire to break down clericalism and the injustices of capitalism, and I believe wholeheartedly in his vision of ecological justice.

More substantively than even all of this, I share with him a deep passion for the poor and marginalized. Like Francis, I, too, have my most vivid encounters with Jesus among those who are homeless, mentally ill, incarcerated or suffering with addictions.

But Francis and I part ways on the topics of women's equality and the full inclusion of lesbian, gay, bisexual and transgendered people in the church. The pope's statements on the plane only reinforced the depth of my disagreement with him.

An excessive amount of commentary has been launched into cyberspace since the news of the pope's comments on women and gay priests hit the Internet, so I'll attempt to give the short, bullet-point version of why I do not share in the hope or excitement of some of my colleagues and friends.

Francis locked the deadbolt on John Paul II's closed door to women, and he reaffirmed the church's woefully inadequate teaching on gays and lesbians as well as its ban on marriage equality. Yet we still hear that many progressive Catholics "cannot get enough" of the new pope.

I have even heard Catholic women who have been fierce fighters for the full inclusion of women in the church claim that they still feel hope and are excited about this pope and his proposed deeper theology of women.

Yes, Pope Francis is a warm pope of the people with a deep passion for many marginalized communities. But he is still advocating some very unjust, harmful doctrinal positions. So why do Catholics, especially many progressive Catholics, continue to give him a pass?

Francis is changing the tone in the hope that the church will be perceived in a better light, but there is little evidence to suggest he will or wants to make doctrinal changes on women's equality, same-sex relationships or contraception, and his response to the issue of clergy sex abuse has been underwhelming at best.

Have we gotten to the point where our desire to realize the church of our dreams and our insistence that Francis will be the man to make our dreams come true is clouding our perception of what Francis is really saying?

Recently, when I criticized the pope's words about the existence of a gay lobby, a friend chastised me, saying I had already decided I didn't like the pope, so there was nothing he could do that would please me.

I took the comment to heart, and I continue to use it as a litmus test for my own reactions to Francis. But I also turned the tables on my friend. Couldn't it also be argued that there are progressive Catholics who have decided they like this pope so much that they have practically given him immunity from any criticism?

Are we truly listening to the full context of what Francis is saying, or are we just hearing what our hearts most deeply want to hear? It is important to be people of hope, but at what point does being hopeful and optimistic slip into avoidance and denial of what this man truly believes?

I realize Catholics are starving for inspiring, authentic pastoral leadership, but honesty and solidarity demand that we speak out against unjust, spiritually harmful words, even if they are coming from a charismatic figure in whom we desperately want to believe and trust.

I want to be hopeful that Francis might have a transformation. Personally, my heart has a deep investment in it: I would love to be able to return to active Catholic ministry again, and I want all of the exceptional women and LGBT Catholics who have the ability to spiritually lead and inspire to be able to answer God's calling.

I want to believe real reforms are in the imminent future. Again, my heart is invested in this: I would love to have the opportunity to marry my partner in the church of my childhood, the church with the "sacramental view of the world" and the finest social justice teachings on the books. I want all LGBT couples to have the chance to marry in the church with which their hearts identify.

But there was nothing Francis said on that plane that leads me to think we are any closer to either of these possibilities. I remain hopeful justice will come someday, but I think it is important to accept the reality that the residual effects of a patriarchal, homophobic, clerical formation can still dwell within a man who is otherwise committed to justice and deeply pastoral.

For many progressive Catholics, the Benedict years were painful and divisive. But the upside of having a pope that was less pastoral and more rigidly orthodox was that it helped some Catholics break out of some of the trappings of our tradition: the passivity, the clericalism, the adulation of the papacy. Laypeople began to embrace the idea that God has infused all of God's people with deep sacramental power.

Since our new pope is so likeable and so obviously committed to justice for many marginalized groups, it appears that even some of the most liberal Catholics are gradually being lulled back into an odd, filial submission to Francis. Hearing so many English-speaking folk refer to him as "Papa" suggests this pope may even be fulfilling the need for a benevolent, spiritual father. I'm not sure how healthy this is spiritually or how helpful it is for the future of badly needed reforms in our church.

The response to the papal plane ride has set up an interesting challenging. How do we remain people of hope with a deep admiration for much of what the pope says and does while also not losing our prophetic edge in fighting for true justice for women, LGBT people, sexual abuse survivors and those suffering from lack of access to contraception?

If we cannot be honest about what this pope believes, and if we refuse to criticize him when criticism is justified, we could run the risk of giving the Vatican public relations machine exactly what it wants: a return to the days when the pope was an object of affection, adulation and unequivocal goodwill -- no questions asked.

When does our hope for Francis become denial?

The twelve steps of Courage: a stairway to denial

The officer and the homeless man