by Eddie Siebert, S.J., The IN Network 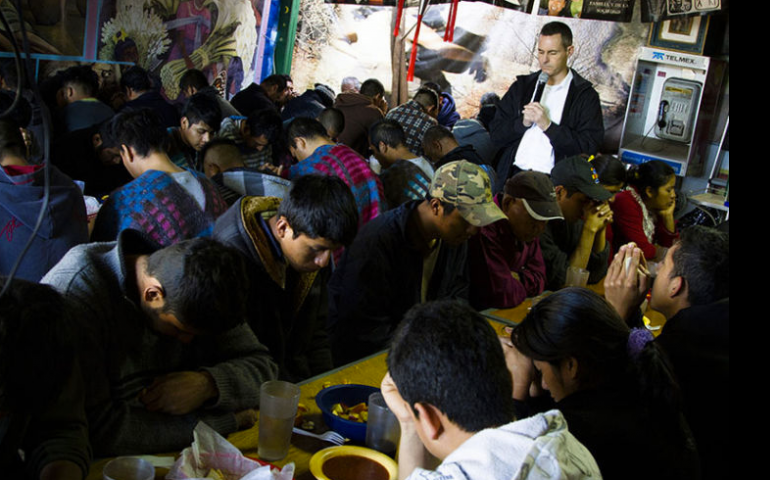 Last Saturday, a group of men, women, and children from both sides of the border braved the rain in Nogales, Ariz. They were there to participate in the annual binational migrant posada, the reenactment of Mary and Joseph's search for shelter in Bethlehem. The procession along the international border is not your typical historical reenactment. Sure, there's a woman dressed as Mary in classic blue, a man sporting convincing Joseph attire, and even a donkey, but the whole affair feels more 2014 than 2,000 years ago. The Holy Family goes on a symbolic search for shelter, a space to be welcomed. But it's the migrants flanking them, 21st-century humans searching for the same things, who prove Advent's themes do not belong to the past, but have very much to do with the present.

This season of preparing to welcome Jesus has been juxtaposed with the ongoing immigration debate playing out in court, Congress, and cable news (among other places). The polarizing positions about who should be welcomed into the country and who should not give us ample opportunity for some modern-day Advent reflection. If we can put the cacophony of political opinions aside for a moment, it might be helpful to revisit what Pope Francis is saying on the subject, namely that Jesus is waiting to be recognized in migrants. His repeated message is clear, yet hard for many to swallow: viewing strangers with suspicion and prejudice simply conflicts with the biblical commandment to welcome all in need with respect and solidarity. He's made migration a top priority from the start of his pontificate, notably making his first official visit outside of the Vatican to Lampedusa, an island in the southern Mediterranean that harbors African migrants hoping to enter Europe. After meeting with the immigrants, he tweeted, "We pray for a heart which will embrace immigrants. God will judge us upon how we have treated the most needy."

These past few weeks, I've been asking, "Am I more apt to help the least of my brothers and sisters or quick to rattle off a few reasons as to why there's no room at the inn?" It's easy to distract ourselves from the connections between Advent's themes and the discussions around the dinner table about President Barack Obama's amnesty laws. Maybe we don't see the links because this immigration debate is so wrapped up in legal ramifications and ongoing political problems that need to be solved. Regardless, we shouldn't let these things distract from the recognition of innate human dignity. We need to look at the migrants with, what Francis calls, "an integrated perspective capable of valuing their potential rather than seeing them only as a problem to be confronted and resolved." After all, we're supposed to be a church that doesn't believe in the concept of foreigners, strangers, or human beings unworthy of being welcomed.

As I listen to these Advent readings, I'm trying to reflect on how Mary and Joseph, the parents God chose, were initially treated on their journey, and what that must have felt like. I think of them fleeing to Egypt after Jesus' birth, determined to protect their child from Herod's wrath. The majority of migrants arriving in the U.S. today are children fleeing from danger. Despite the journey being extremely dangerous, parents often send their young because it's safer than the alternative. In July, Pew reported there's been a 117 percent increase over 2013's number of children 12 and younger crossing the border alone. Can we see, as Francis urges, the face of Christ in these children risking their lives to cross a border we spend $18 billion to defend?

Below is an Advent reflection we filmed with Jesuit Fr. Sean Carroll, the executive director of the Kino Border Initiative (KBI). The co-sponsor of Saturday's posada procession, KBI's vision is to help make humane, just, workable migration between the U.S. and Mexico a reality. They promote U.S./Mexico border and immigration policies that affirm the dignity of the human person and a spirit of binational solidarity. Sean and his team offer food, shelter, and pastoral counseling, reminding migrants that God is with them, even when it doesn't always seem like it. KBI is one of the innovative ministries reinforcing that we are a church without borders and that everyone deserves a space to be welcomed. So let's not confuse Advent, this season of hope, with an historical account not applicable to our current world. Aspiration of hope, after all, is how Francis defines migration.